12 Must Visit Attractions in Liverpool, England

Liverpool is a city and a seaport in the North Western part of England. Some of the city structures were recognized by UNESCO as World Heritage Site. In 1715, the first dock in Liverpool was built. Then eventually added four more docks to suffice the need of the Liverpool’s busy seaport. . The place became more popular because of all the artists rose from here, one of which is the group of 4, named “the Beatles”.

Did you know that the original name of Liverpool is Liuerpul?

Albert Dock was Britain’s very first structure made of brick, cast iron and stone, which made it as the very first non-combustible warehouse system in the world. This dock buildings and warehouses was designed by Jesse Hartley, an English Civil Engineer and Philip Hardwick, an English Architect. In 1846, it was opened and started serving its purpose in Liverpool, England. It was the first warehouse who used the First Hydraulic Cranes in the world.

Here are some free and paid activities that can be found in Albert Dock:

Chinese Arch is located in the Chinatown area of Liverpool. This area is the oldest Chinese community in Europe. The arch was officially open to the public in 2000 during the Chinese New Year Celebration. It was designed by Wilkinson Hindle Hallsall and Llyod Partnership, but built by Native Chinese hired from China.

George’s Pier Head or Pier Head is located in the riverside of Liverpool, England. The pier serves as the location of the cruise port terminal, the gateway of all cruise ship passengers visiting the place. It is a part of a UNESCO World Heritage Site, the Liverpool Maritime Mercantile City. 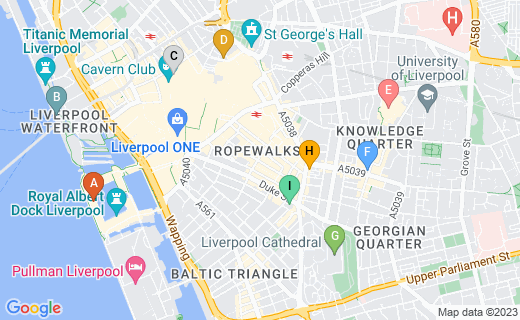 Revolution Cavern Quarter is a famous bar and restaurant located in Liverpool. It serves wide range of beers, ciders, cocktails, spirits and wines. The place offers delicious dishes too that will perfectly match up their drinks. Private and Corporate events can also be held here.

Walker Art Gallery was opened on September 6, 1877. The structure was designed by two English architects, Cornelius Sherlock and H.H. Vale. The gallery was named after the former city mayor, Sir Andrew Barclay Walker. This art gallery funded by the central government. It houses one of the largest art collection in England.

William Brown Library and Museum was named after William Brown, a Liverpool merchant who donated the funds needed in building art gallery, museum and public library.

The Museum offers free entrance to all visitors.

Queen Square Bus Station is the bus station owned and managed by Merseytravel which serves the area of Merseyside, Liverpool.

Britannia Adelphi Hotel was built during 18th century in Ranelagh Palace in Merseyside, Liverpool. The building is owned and managed by Britannia Hotels, a hotel group in United Kingdom. The hotel has en-suite bedrooms, conference room, dining areas and gymnasium.

The guided tour in Liverpool Cathedral is for free. However, the management strongly encourage visitors to make a donation of at least £3 per person.

Philharmonic Pub or Philharmonic Dining Rooms is a public house in Merseyside, Liverpool. It was built in 1898 by Robert Cain, the founder of Robert Cains Brewery. The building was designed by Walter W. Thomas, a British architect practicing in Liverpool.

Liverpool’s Anglican Cathedral is considered as the Britain’s largest church and world’s largest Anglican Cathedral. It was designed by George Gilbert Scott, an English Gothic Architect. Some of his works famous works are the red telephone box and the Tate Modern or the Southwark Bankside Power Station in London.

Did you know that the organ of Liverpool’s Anglican Cathedral contains 9765 pipes? Making it the world’s largest working model.

Church of St. Luke was built in 1811 and designed by a father and son duo, John Foster Sr. and John Foster Jr. In 1941, the church was severely damaged during the Liverpool Blitz. The church is sometimes named as “Bombed Out Church”.

12. Liverpool One Shopping in Lord St.

Liverpool One Shopping is the shopping center of Liverpool. The place houses wide range of shops including all the all-time favorite brands.

For any information about the city tour and online booking, you can visit an online Liverpool Hop-on, Hop-off Bus. They offer a very affordable city tour for as low as £8.00 per person.