Ok, Moscow has so much cool stuff to cover but if your time in the city is limited you'll need to plan your time efficiently. If you find yourself with only a limited amount of time to spend in Moscow and you're not sure what to do then look no further. Read on my friend and let me tell what you should see, where you should stay and how to get around.

Everything I have listed in this article can be accessed simply by using the Metro Line 1. Getting around using the Moscow Metro system is also a tourist attraction in its own right. The subway stations are works of art! Trains are frequent and get you from stop to stop quickly and cheaply. Some of the signs are written in Cyrillic only so you would be advised to have a basic understanding of the Cyrillic alphabet or at least know what the Russian word of your stop looks like so you can pick it out.

If you don't want to use the Metro there is also a very sophisticated public transport network including buses and trams and in recent years huge efforts have been made to improve the cycling infrastructure.

If being driven places is more your thing then you may be pleased to know that Uber operates in Moscow as do other ride sharing apps. However, be warned that the Moscow city roads can become congested - especially at peak times. 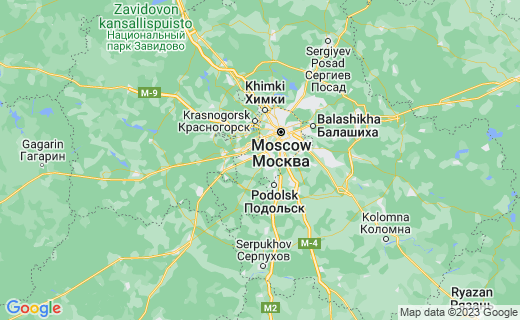 Cathedral of Christ the Saviour

The Cathedral of Christ the Saviour is not an original. The original church was built on this site throughout most of the 19th century with its consecration coming in 1883. However, its first life was to be short-lived. In 1917 the Bolsheviks overthrew the provisional government of Russia and founded the Soviet Union with Vladimir Lenin at its head. The ruling Communist Party immediately set their sights on cracking down on religious freedoms in Russia and all religious buildings were at risk.

While Lenin didn't manage to pull the church down during his short spell in charge before his death, his eventual successor, Joseph Stalin did just that in 1931. The Cathedral of Christ the Saviour was razed to the ground and in its place was proposed to be a huge building dedicated to the legacy of Lenin.

The building never made it out of the ground and in its place came the world's largest swimming pool which remained on site until the fall of the Soviet Union. Once a new government was in place in the early 1990s plans were announced to reconstruct the Cathedral of Christ the Saviour on the same spot by the river. It was rebuilt with help from donations from the Moscow people and the Russian Orthodox Church.

Tourists can now go up on the terraces on each of the west, east, north and south elevations and take in incredible views over Moscow.

When one thinks of Red Square the image of the redbrick Kremlin walls comes to mind with the immaculate turreted top and those pointy watch towers and clock tower. It's the quintessential image of Moscow and you'll want to get your camera and start snapping away as soon as you see it.

Alongside the absolute power that the image of the Kremlin walls conjures up there is another image that most people would associate with Red Square, and that is the more romantic and colourful, St Basil's Cathedral. St Basil's stands proudly at the southern end of the square looking on while history passes by. It's a majestic building full or wonder and elegance. The onion-domes (which I always think look more like ice cream cones) make this a cathedral unlike any other - except perhaps for the Church of the Saviour on Spilled Blood in St Petersburg.

One of the most beautiful shopping centres in the world. And it looks even better at night. The GUM was officially known as the State Department Store during the Soviet years of communism. Post-Soviet Union the store was renamed as the Universal Department Store. Fortunately the Russian Letters fro State and Universal are the same that building is still known as it always has been: simply GUM.

Lenin's Mausoleum is a marble temple-like building that sits half way along Red Square in front of the walls of the Kremlin. It is guarded around the clock as this is a place of high cultural significance. The mausoleum contains the embalmed body of the revolutionary leader of the Bolsheviks and first Communist leader of the Soviet Union, Vladimir Lenin.

The mausoleum is open to the public albeit for only 3 hours on four days each week. Expect queues to stretch around the block. However, traffic is kept moving. Nobody gets to stop in front of Lenin's body so it's a human train of constantly shuffling feet. And photography is strictly forbidden.

Get yourself a top camera! 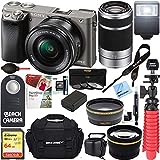 Sony Alpha a6000 24.3MP Interchangeable Camera 16-50mm & 55-210mm Zoom Lens (Grey)+ 64GB Accessory Bundle + Large Gadget Bag + Extra Battery+Wide Angle Lens+2X Telephoto Lens +Flash +Remote +Tripod
I took a lot of photos while I was travelling on this trip and also made several videos. Through experience I have learned how important it is to have a good camera if you want to capture your travels in the kind of quality that will stand the test of time. I look back on some of the photos from my older trips - photos taken with inferior cameras - and I feel a bit disappointed by them These days I use the Sony a6000 camera and take it everywhere with me. I'm really pleased with the quality of the images.
Buy Now

Top Tips for Visiting the Kremlin

The walled fortress of the Kremlin is open to visitors throughout the year, although much of the area inside the walls is off limits to tourists. It's quite understandably one of the busiest sights to see in Moscow so you can expect it to be busy most of the time during the warmer months. Tickets can be purchased in advance but it's not necessary if you arrive early.

The queues move pretty quickly but the ticket office can seem a little confusing as there are many ticket windows all offering slightly different variations of the same thing: group tours, organized tours, school tours, combination tickets, tickets for entry only, tickets for The Armoury only. Find the right window and get in the queue and buy your tickets. Be prepared to go through security and bag check similar to the process at an airport.

Marvel at the art in the huge New Tretyakov Gallery

The New Tretyakov Gallery is the dedicated modern art branch of the larger Tratyakov Gallery located elsewhere in Moscow. This gallery is located in Gorky Park next to the Moskva River. There is a small charge to enter the museum and there are large floors to explore. The art on display is fantastic and very diverse in its themes. Well worth spending a couple of hours here.

The Arabat Neighbourhood is centrally located and can be walked to from the Kremlin and Red Square area. The main Arabat Street runs right through the the heart of the neighbourhood. It is a former working class neighbourhood but has become much more touristic. A particular recommendation from me would be to go and have a meal in the Varenichnaya No.1 Restaurant. It's a retro Soviet diner filled with soviet nostalgia items and traditional soviet dishes such as borscht, pelmeni and blinis. It's a really fun experience.

Enjoy a Stroll Through Gorky Park

If the weather is good spend some time wandering through Gorky Park. Aside from the New Tretyakov Gallery mentioned above visitors can explore the Muzeon Art Park and delight at all the statues and pieces of soviet artwork. The park is large and tranquil and features several cafes in which to grab a coffee and bite to eat and watch the world go by.

Crossing the bridge from the Cathedral of Christ the Saviour, you will find yourself on Bolotny Island which is a small island straddled on either side by the Moskva River. Head southwest and you will come across the next two sights on this list.

The Red October Complex occupies a large area on the south western corner of Bolotny Island. What was once a Soviet chocolate factory during communist times, the collection of former factories is now a thriving entertainment venue providing clubs, bars, restaurants and cafes. The city's hippest young things head here at the weekends and party til dawn,

Monument to Peter the Great

Just off the south western tip of the Bolotny Island is the very tall and slightly bizarre monument to Peter the Great, a man who loved Moscow so much that he spurned it as soon as he became leader of Russia and founded a new centre of power on a swamp on the banks of Europe. A Moscow hero he is not and muscovites have been campaigning to get the statue removed for years. As of 2018 it seems that their wish may finally come true as it was announced that the monument may be taken down in 2019.

Watch a Performance in the World-Famous Bolshoi Theatre

The world-famous Bolshoi Theatre in Moscow. The home of ballet. This incredible venue has seen the world premiere of some of the most famous ballets in the world - productions that have shaped society and culture all over. The most famous of all was the premiere of Tchaikovsky's Swan Lake 4 March 1877.

Where to Stay in Moscow

Moscow has some of the finest hotels in the world including the world-famous Hotel Metrolpole and the Four Seasons just off Red Square.

However, I will only make one hotel recommendation and that would be for the hotel that I stayed in during my visit. I stayed in the Hilton Leningradskaya near to the Leningradsky and Yaroslavsky Railway Stations and easily accessible to the centre of Moscow (Red Square) in 15 minutes on Line 1 of the Moscow Metro.

Does the negative reputation of Putin and his Government put you off visiting Moscow?