I love to write about and photograph places I have visited, discuss these with like-minded people and find out their perspective also.

View Over Annaberg-Bucholz Before Christmas

My German friends and Freiberg Weihnachtsmarkt

I have a dear German friend whom I have known since my teenage days, we met via an international penpal club, he lived in East Germany and I lived in New Zealand; I found out very fast how difficult it was to correspond with someone who lived in a communist country. If I inadvertently wrote anything remotely political my friend told me that almost all of the letter was blacked out, Dad was always telling me to be careful otherwise I would get him into trouble. We continued to exchange photos and letters after he got married, although there were long gaps between our letters. When I did receive one it would often have many words blacked out with severe, perfectly straight lines.

I found out years later that my friends thought I had forgotten them, but the Stasi had confiscated my letters. This was partly punishment for them wanting to live in West Germany, where they eventually did, legally, near Cologne. They never received my missing letters until well after the Berlin Wall came down.

I finally met them both for the first time underneath the magnificent Eiffel Tower in Paris in 2009, it was magic. The three of us got on so well and laughed so much, now many years later we are even closer friends and email/WhatsApp each other constantly.

I spent a few days with them when they lived near Cologne in 2012; they showed me all around the beautiful city and the idyllic towns along the Rhine. They moved back to their homeland in the Ore Mountains, Saxony a few years ago and were so eager for me to visit them again, but I was apprehensive that it would not be as beautiful as the west...how wrong was I!

I made sure I visited a few days before Christmas so I could visit as many Weihnachtsmärkte as possible. Freiberg was my first where I had a cup of delicious but lethal glühwein then across the square to Kaffee Hartmann. Oh my! The cakes were even more tempting than the glühwein, they are all presented so beautifully and they taste like heaven. I knew I would not be leaving Germany two weeks later feeling any lighter.

The Cities I Visited In Saxony

Have you visited any of these cities?

Situated high in the Ore Mountains, Annaberg-Bucholz is the capital of the Erzgebirgskreis region and used to be two separate towns until they merged as one in 1945; lace making then silver mining were the main sources of income before WWI. Now there is a range of industries that are productive in this beautiful mountain town, tourism and skiing being amongst them. The immensely popular Annaberg Weihnachtsmarkt is open for 4 weeks before Christmas.

Seiffen is a 1 hour drive north east of Annaberg-Bucholz and is situated close to the Czech Republic border. It's well-known for wooden carvings of charming curved candles which you will find in all windows at Christmas.

These intricately carved candle holders and colourfully painted wooden toys tell the mining history of Seiffen and Christmas. They started being made after the demise of the silver mining industry in the late 1600s. Along with lace making, it paved the way for families to make money and help the local economy. Seiffen is now the centre of wooden toy industry.

Having been born in New Zealand and living in Australia we are not used to the close proximity of neighbouring countries, only the ocean is our neighbour so I found it strange driving from Germany to the Czech Republic without my passport, the drive from Annaberg-Bucholz to Boži Dar only took 15 minutes.

We visited Klinovec in Jáchymov, Karlovy Vary, I had never been in thick blowing snow and found it hugely exhilarating. Klinovec is the highest peak in the Ore Mountains and also has a TV tower at the top. Afterwards we visited a restaurant for our lunch which was delicious albeit very heavy on the stomach.

A Warning For Tourists Driving in the Czech Republic

If you drive over the border into the Czech Republic make sure you have your car lights on all the time otherwise the police will pull you over the moment you arrive and fine you!

What a beautiful region this is! It takes 1/2 hour to drive from Annaberg to Oberweisenthal and it is stunning. We first went up there the day after Christmas but it was too warm for snow so my friends took me back for a second visit in the New Year, it was magic just like my childhood picture books. I did not even recognise it as the same place we had visited only a few days before. All the green ski slopes were now thick with white powder and the population had escalated massively, even the cable car was busy.

Café König is a delightful place to eat some scrumptious cakes and relax with hot chocolate, don't worry about the calories because you will walk them off.

We even saw the magnificent Fichtelbergbahn steam train travelling along, we heard the sound of the steam before we actually saw it and it reminded me of The Railway Children.

Dresden is draped in a very rich history, the city suffered badly during the war after the bombing by the Allies almost flattened the city, a subject that is still a contentious issue today, but it has re-invented itself to be one of the most powerful cities in Germany.

The Frauenkirche is truly a wonderful symbol of what collaboration between countries can achieve. My friends had bought tickets months before my arrival for a concert held at the Frauenkirche just before New Year, it was such a privilege to be inside this beautiful church, especially at such a prestigious concert.

The weather was very murky during our short stay but we managed to walk around the city and view the beautiful baroque architecture. The Zwinger Palace is now a museum and art gallery set in beautifully designed gardens and the Fürstenzug is another stunning piece of architecture to visit, it was originally painted in the 1870s and was replaced with Meissen porcelain tiles in the early 1900s. It is the largest porcelain artwork in the world.

We left Dresden and took a 3/4 hour diversion via Meissen to look at the porcelain museum. The craftsmanship is astonishing and the art and design is so innovative. There is so much diversity of styles, I really wanted to buy something but the thought of breaking a cup and saucer that cost €400.00 sent me into an apoplectic fit. This is most definitely worth a visit for a few hours, you can also watch the craftspeople at work in their studio. We had to hurry back to Annaberg before the light failed because the roads are treacherous in the mountains during winter.

Freiberg is my friends' true homeland and it had always been their dream to show me around their birth place since we started writing to each other. This university town, not to be confused with Freiburg in the south of Germany, lies approximately 30 kms south of Dresden, it has a strong mining history with old mines dotted around which you can still visit. We made only a short 2 day visit to this city on New Year's Eve and stayed in the lovely Silberhof Hotel where I had a delightful corner room with lovely views.

We went to church at 11pm then had to rush out to find a space to watch the fireworks. It was mind-blowing, I have never seen a city fill up with smoke so fast, it was like a thick smelly fog and my friends held onto me because I would have got lost or fallen over the edge where we were standing. We reeked of smoke so I dived into the shower as soon as I got back to the hotel at 1am. The next morning there was debris everywhere we drove.

Coming from a country where it is illegal to buy fireworks I was utterly shocked to see them freely available in the supermarkets, children were carrying large fire crackers in their hands.

There are so many fantastic restaurants in Freiberg and the Schwanenschlökchen is most definitely one of them. The setting on the lake, the architecture and the delicious food and beer make it a dream place to have lunch.

I actually put on 4 kilos after 2 weeks but the food and beer is so delicious, plus I had another dream stay with my dear friends in their very beautiful country.. 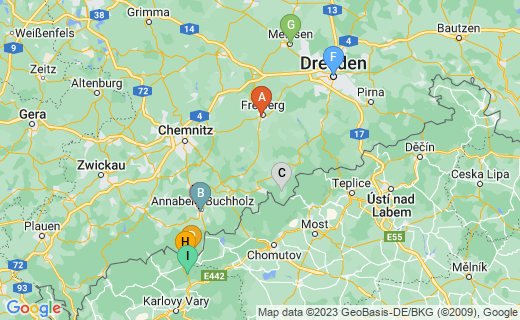