Who Is the Folsom Native Plant Society?

The Folsom Native Plant Society has been active since the late 1980's. The purpose of the group is to protect, perpetuate, and propagate the abundant native plants of St. Tammany Parish, Louisiana, and adjacent areas, focusing primarily on our native wildflowers, which are fast disappearing; and to discourage pollution of our water and ground so basic to their survival.

This page is about the good work that the FNPS members do to help keep St. Tammany Parish beautifully wild and naturally native. We meet monthly, nine times a year, usually on the third Sunday of the month at 1:00 p.m. If you are in the Covington or Folsom area (St. Tammany Parish, Louisiana), feel free to join us at one of the meetings.

The FNPS began in February, 1988. Temae Theriot, the Folsom Librarian, & Margaret Cambre were interested in submitting Folsom for the Clean City contest for the 85th Folsom Founder's Day celebration. As a vehicle for this they organized a "garden club." In three days they had all of the required paperwork submitted and the ball began rolling.

During this time Temae met John & Muriel Larkin and discovered a mutual passion for native plants. Temae, John and Margaret were not interested in becoming just another garden club so they decided to focus on native plants. With John's help and expertise, a meeting was set up in the Folsom Library with an original roster of 11 people. John Larkin, Temae Theriot, Vincent Gagliano and Naomi Odenwald are the 4 original members still in the club today. Within a short time interest grew as did the membership (from 6 to 50 members).

(Photo on right: A past president, Yvonne, with 2 of the founding members.)

to protect, perpetuate, and propagate the abundant native plants of St. Tammany Parish, Louisiana, and adjacent areas, focusing primarily on our native wildflowers, which are fast disappearing; and to discourage pollution of our water and ground so basic to their survival.

Every time we see a sign go up that a new shopping mall or subdivision is to be built, we cringe and then go into action. A small team of rescuers with shovels, buckets, bags and water converge upon the site to mark and dig up native plants that are in the bull dozer's way. We then nurse the plants until the shock has passed and it is safe to transplant them to another, more safe spot. We usually have plant and seed swaps at least twice a year. This way we can share rescued and extra plants with members who have the right habitat for them.

Since Katrina the contractors have been keeping us way too busy, but now that things have slowed down (because they over built) we have a little breathing room. But during the 3 years since Katrina, we have lost so much of our beautiful and beneficial natural habitat here on the North Shore.

East Gulf Coastal Plain Wildflowers: A Field Guide to the Wildflowers of the East Gulf Coastal Plain, Including Southwest Georgia, Northwest Florida, ... of Southeastern Louisiana (Wildflower Series)
This is a Great book that is organized according to flower color so it's easier for beginners. The photographs are large and the descriptions are excellent.
Buy Now

We discourage pollution of our water and ground

Even before Hurricane Katrina, but especially after, our precious native habitat in St. Tammany Parish has been threatened. We have been working with other organizations and individuals in an effort to stop pollution in both the Little Tchefuncte River and Pruden Creek.

About a year after Hurricane Katrina, improperly supervised workers with heavy equipment contracted by St. Tammany Parish and the NRCS severely damaged several miles of riparian area along the Tchefuncte River.

The issues on the Tchefuncte River have been addressed, but the constant flow of silt from an illegally installed drainage pipe at a construction site on Pruden Creek continues. Every time it rains the silt pours out of the pipe into Pruden Creek and then into the Tchefuncte River. Even though both Pruden and the Tchefuncte are protected under the LA Scenic Rivers Act, the contractor who created this mess continues to evade LA Wildlife and Fisheries.

We Reach Out to the Community

The members of the FNPS take advantage of every opportunity to spread the word about preserving and using native plants in home landscaping. Each year we have an informational booth at the Spring Plant Show which is sponsored by the St. Tammany Master Gardeners. Through the years, Yvonne, our past president and Al, the former first man, have given Powerpoint presentations to groups all over Louisiana. We also taught 3 hour class about landscaping with native plants to two different groups of new Master Gardeners.

We've even tried to reach the children through our informational booth and by planting trees and shrubs at Folsom Elementary School. Here's a member of Miss Ollie's first grade class helping to plant a Live Oak and a Red Mulberry tree.

After Hurricane Katrina, we donated a Live Oak and a Red Mulberry tree to each of the major cities and towns in St. Tammany Parish to help replace the trees that were lost during the storm.

Some of our landscaping with native plant photographs were even featured in an article about Naturescaping which was published in the 2008 summer issue of Louisiana Conservationist.

We also planned and planted a Wildflower Garden at Northlake Nature Center and several of our members volunteered to host tours or volunteer as guides for their annual fund raiser, the Great Louisiana Bird fest.

The Louisiana Iris: The Taming of a Native American Wildflower, 2nd Edition
Everything you wanted to know about Louisiana Irises, from the experts at the LA Iris Association.
Buy Now

Members collect native plant seeds from their property, from roadsides and from wild areas and the FNPS labels and packages them so that the seeds can be given out at festivals, presentations and to schools for wildflower projects.

Each January we pot anywhere from 100-200 tree seedlings that were ordered from the LA Dept. of Agriculture and Forestry. These trees are given away to new members who join at the Covington Master Gardener's Spring Garden Show.

Each spring and sometimes in fall, too, we set up our booth at the local garden shows and festivals. There we give out hundreds of packets of seeds and potted trees, shrubs and perennials. We also provide educational literature about native plants and their use in the landscape. Copies of the newsletters, which are published 8 times a year are distributed to interested people.

Our meetings are held at the homes of club members. That way we get to observe a variety of plants and landscaping techniques. We have members from all over St. Tammany Parish and even a few in Tangipahoa and across the lake on the South Shore. 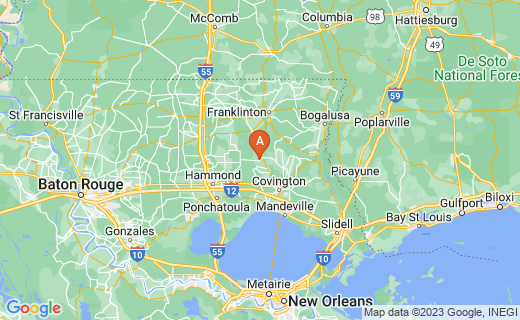 Our club promotes native landscaping. Here are some great reference books that we have found helpful.

Gardening with Native Plants of the South
Buy Now 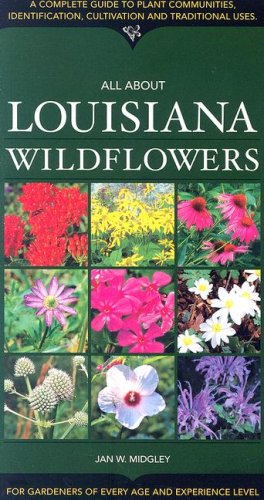 All about Louisiana Wildflowers
Buy Now

Florida, another Gulf Coastal state has been promoting native landscaping in recent years. Here are a few books that will help you get started.