8 Places to Visit in Bikaner

Bikaner is a city in Rajasthan, India with a rich cultural heritage and historical importance. It was the capital of the former princely state of Bikaner and is the 5th largest city of Rajasthan. Situated in the middle of Thar desert, Bikaner has hot desert climate. Established in 1488 AD by the Rajput King Rao Bika Ji, Bikaner is famous for its beautiful palaces, forts and temples. The splendid constructions and the artwork are well preserved in the city. The ancient city of Bikaner impresses the visitors with its cultural richness. The foodies also have a gala time here as Bikaner is world famous for its 'bhujia', 'rasagullas' and 'kachoris'.

Here are the 8 must see places in Bikaner which are major tourist attractions: 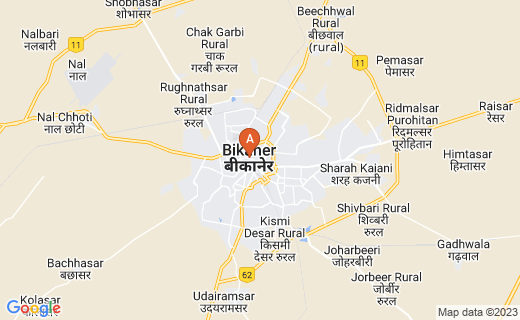 Built in the year 1593 by Raja Rai Singh, Junagarh Fort is a fine blend of Mughal and Rajput architecture. The fort is spread over 5.28 hectares. Located in the centre of the city, Junagarh Fort is the pride of Bikaner. Some of the attractions inside the fort are Anup Mahal, Chandra Mahal, Hawa Mahal, Dungar Mahal, Diwan-e-khas and Ganga Mahal. There is also a museum inside the fort which exhibits manuscripts, miniature paintings, jewels, royal costumes, royal orders, portraits, costumes, headgear and dresses of gods’ idols, enamelware, silver, palanquins, weapons and war drums.

Lalgarh Palace was built by Maharaja Ganga Singh in 1902 in memory of his father Maharaja Lal Singh. This red sandstone construction which reflects the architectural brilliance of the past, has now been converted into a luxurious heritage hotel where the tourists can stay to experince a touch of royalty. The massive lawns of Lalgrah Palace houses peacocks, which are a sight to behold when they dance.

The 600-year-old Karni Mata Temple at Deshnok is world renowned for its resident population of rats which are venerated and worshipped by the locals. It is about 30 kms from Bikaner.The temple is dedicated to Karni Mata, an incarnation of Goddess Durga.

There are about 20,000 rats in the premises who move freely in the temple. Rats can be seen everywhere in the temple, even nibbling the prasadam. If anyone kills a rat in the temple even by mistake then an idol of rat made of gold has to be donated as the penace. Sighting of white rat in the temple is considered very auspicious as they are considered to be manifestations of Karni Mata and her sons..

Located on the banks of a lake, Gajner Palace was constructed by Maharaja Ganga Singh in 1976. Spread across an area of 6000 acres, it was used as a retreat by the royal family after hunting. The palace is made up of red sandstone and is situated in the midst of a forest. It has been converted to a heritage hotel. Migratory birds flock in great numbers at the lake. It is a beautiful place to spend a quiet evening.

The scenic landscape in Gajner Wildlife sanctuary is worth admiration. The sanctuary is famous for migratory birds. You can also see wild creatures like blue bulls, Indian hares, antelopes, deer, wild boars and many more. The famous Gajner Palace is also located in the sanctuary. One can enjoy viewing wild life and migratory birds by using jeep and camel safaris.

The intricately designed Jain temple is an excellent example of Rajputana architecture and is made up using red sandstone & white marble. Bhandasar Jain Temple dedicated to 5th Tirthankar Lord Sumatinath was built by a Jain merchant Bhanda Shah. The three-storied Jain Temple is famous for its mirror work and sculpted pillars.

Founded by Maharaja Ganga Singh in 1937. Ganga Singh Museum has on display articles of historical importance. It has unique item even prior to the emergence of Harappan civilization. The vast collection at the museum includes paintings, pottery, weapons used by Rajputs and lot more. T

Camel Safari Day tours is one of the most popular tourist activities. Feel the essence of Thar desert while riding on camel back. Camel Safari takes you to the vast desert landscapes which is an altogether different experience.It is a thrilling experience to capture the beautiful moments on camera. You will cherish witnessing the scenic sunset in the desert forever.

More in the series