Officially Cape Ann consists of Manchester-by-the-Sea, Gloucester and Rockport. (Rockport used to be part of Gloucester, and everyone from Rockport comes into Gloucester to do their grocery shopping) Less than an hour away from Boston (35 miles) and with the MBTA train service, it makes commuting accessible and Logan airport viable as an international gateway. It is a living, working fishing port and over at East Gloucester is the Rocky Neck Art Colony; the oldest working art colony in the USA. Here, you will find some of the finest beaches, amazing vistas, and the freshest fish and seafood with some good fresh sea air.

Gloucester was the fourth New England colony established in 1623

A group of fisherman from England under the Dorchester Company arrived to harvest the abundance of cod and to set up a business and profit from the natural resources. Here is where the original ‘planters’ arrived and settled. In Stage Fort Park, a boulder marks the original landing spot with a nearby Welcome Center. Half Moon and Cressy’s beach are in the vicinity along with numerous viewpoints complete with benches and picnic spots. On Thursdays you will find the Cape Ann Farmers Market here and doubles up during summer as a venue for concerts. Simply a great place to sit and read, go for a run, walk the dog or tread in the footsteps of some of the first settlers in the country. 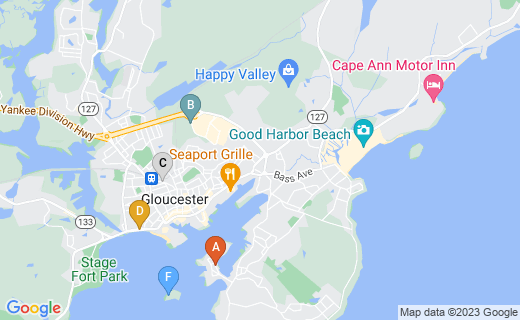 Rocky Neck Art Colony, is the oldest working art colony in the USA, dating back to 1850. Many artists and writers have been inspired here (Henry David Thoreau and myself included) and have created some of their best work here. In conjunction the nearby Gloucester Writers Center and the Gorton Theater, it makes for a haven for anyone in search of creative inspiration, with historic art trails, readings, workshops and performances. Watch artists at work in their open studios or visit the galleries at the Cultural Center in East Gloucester. On a clear day, Boston is visible from the beach as well as the lighthouses when the sunsets across the coves and if you are up early enough you can experience the astounding sunrises.

Distance and time from Boston

Gloucester is about 35 miles north of Boston.

Gloucester Fisherman's Memorial or the ‘Man at the Wheel’ statue

This is one of the most visited sites in Gloucester. Built in 1925, it is on the main esplanade and was added to the National Register of Historic Places in 1996. The memorial plaque erected in 2008, lists all those known to have been lost at sea, not only Gloucester residents. Based on the work of Roberta Sheedy, who compiled a ‘Lost at Sea Register’, which took nearly five years of research. Sheedy’s family, who have been in Wonson’s Cove, Gloucester for six generations, began to collect data from records from the city archives and old newspapers while researching her own family. With the help of the Gloucester Archives Committee, over 5000 names are currently engraved as the list continues to grow, paying tribute to the men who lost their lives at sea.

He set up the General Seafood Corporation and factory in Gloucester to use the technique he developed from observing his time with the Inuit in Canada and how they preserved food. The old factory near Pavilion Beach, known as ‘the Fort’, is scheduled for demolishment and is to be turned into a waterfront hotel. Birdseye’s ashes were scattered at sea near the factory having always remained an affection for the area, even though he was born and died in New York.

The novel and film, The Perfect Storm was based on a storm in Gloucester. The community is well prepared for nor’easters, being snowed in and high and fast tides. Life goes on and there is plenty of community support. Snowplows are attached to most vehicles, as many areas of Gloucester are elevated, the weather doesn’t stop the locals. Check the tide charts as they come in fast and high to make sure you don’t get caught out. Visiting the area during the fall or winter increases the chances of encountering a nor’easter, but have no fear as the city copes very well.

There are several lighthouses in Gloucester; Eastern Point, Ten Pound Island and Annisquam. Thacher Island, with its twin lighthouses in Rockport are also visible if you are in East Gloucester. As an active fishing port, these are essential to keep the fisherman and the community safe and begin flashing once twilight falls. At night watching the boats and lighthouses is beautiful, especially if there is a full moon. You can visit Eastern Point and Thacher Island, but the others can only be viewed by boat or can be seen on a clear evening from the beach or harbor.

St. Peters Fiesta, in honor of the patron saint of fisherman is a five-day event that takes over the city of Gloucester, usually at the end of June. The Greasy Pole contest is one of a kind, originating in Sicily where most of the Italian community originally came from and the popularity of the festival now attracts people from all over New England. Many of the local businesses have an Italian heritage; Virgilio’s Italian Bakery, supplies bread for the local grocery stores (the community are loyal and buy local) and closes as most Italian places do on a Sunday for a family and holy day, even during the tourist season.

The city is well served with a supermarket next door to the train station, several pharmacies, banks, a post office, casual dining, coffee shops, seafront bars, local restaurants, bookstores, antiques stores and a cinema. Less than a mile away is Gloucester Crossing with mainstream retail outlets. Everything you need is less than few miles away, with the train station less than a ten-minute walk to Main Street is easy to navigate and to explore and much easier than driving around.

Gloucester is a breath of fresh sea air, where the down to earth locals welcome tourists, but carry on with their day-to day lives. The city has a wealth of history, not as notorious as neighboring Salem, less commercial than Newburyport, and more authentic than Rockport. Known as the other Cape, I love both; Gloucester is less glitzy than Cape Cod, retaining an unaffected charm.