A Day on the Delaware Bay

A Day on the Delaware Bay

In his almost forgotten book, The Young Wireless Operator with the Oyster Fleet (1922), Lewis Theiss describes past preparations for sailing out of Bivalve, New Jersey into the oyster grounds of the Delaware Bay: "For despite the early hour, the oystermen were astir. Lamps glowed in the snug cabins of the oyster-boats. Here and there a lantern bobbed mysteriously in the dark. Red and green lights were being hoisted in the ship's riggings, and white lights fastened astern of many vessels. Harsh voices were heard calling through the night. The heavy tramp of boots on wooden decks here and there in the darkness. Now and again there was a sharp splash as some sailor dropped a bucket into the tide for water, or a heavy hawser was cast off. On every side was heard the sound of preparation; for the fleet was about to sail for the oyster grounds." Today's Bivalve, though not nearly as active, is just as colorful. The fleet is considerably reduced, but it still exists.

Over fifty years ago, I, too, tramped the wooden planks of Bivalve Harbor past old nets smelling of brine and rusty dredges leaning against wooden beams. My ship, the Julius Nelson (named after a famous Rutgers biologist), was not an oyster boat but the research vessel of the New Jersey Oyster Research Laboratory. The captain had already started the diesel engine that churned up muddy whirlpools in the swiftly flowing Maurice River. Lights across the river flickered in the darkness of pre-dawn.

We were to sail out into the bay to collect various samples to determine oyster larva distribution in order to help oystermen know which areas of the bay would be best to dump old shucked oyster shells for young new oyster to grow on in an otherwise muddy bottom. Our oystermen had the same problems of Theiss' oystermen of the 1920s. --parasitic oyster drills (a kind of snail), occasional invasions of destructive starfish, rare algal diseases such as the famed "red tide"--but they have more. The bay has become increasingly muddier because of poor soil conservation upstream and increasingly more polluted because of heavy industry upstream. If pockets of heavy concentrations of oyster larva arre to be found, then scientists must advise oystermen where they are.

We chugged slowly down the winding Maurice River lined with bitter smelling, grassy marshes. In the reddening sky we caught glimpses of gray and white willets flying out of clusters of tall grass. Here and there we saw dead and bleached trees with osprey nests. Once we passed the delta of the river, the sun's rim flared over the horizon, and the vast Delaware Bay spread before us. We could see back over the marshes into dense woodlands of pitch pine, oak and laurel bushes that serve as good nesting areas not only for warblers, woodpeckers and vireos but also for occasional eagles.

As we sailed past wooden stakes marking various oystermens' beds in the shallow bay, I checked over the scientific equipment in the stern of the ship. The plankton nets, Secchi disks, salinity and larva sample bottles all seemed in order. The bay became a bit choppy increasing winds. In the distance a great oil tanker steamed its way through choppy waves toward Philadelphia. It shimmered in the distance like a phantom.

Suddenly the captain shouted "station." One of my shipmates went to the bow, and I stayed at midship. I threw over a hose and turned on a pump that sucked up water from the bay's surface which in turn flowed through a 64 mesh cloth with an attached collecting bottle. The pump ran for one minute pumping exactly 100 liters of sea water through the fine meshed net. With a bulb pipet I skirted the scum from the net into a labeled bottle that would be examined by microscope for oyster larva back at the lab. I then lowered the hose to within a foot of the bay's bottom to carry out the same procedure. The Lab men would be looking for the various stages of development of larva (straight hinge, early and late umbo and mature) and keep a check on growth and development for a given location through the spawning season from June to August.

Bonaparte gulls circled the ship as I dipped salinity bottles into the water for more lab samples. I then took the surface temperature and quickly lowered a depth thermometer with a built-in salinity sampler. With this done, I grabbed the black and white Secchi disk and lowered it into the water to determine how many feet down I could see. Salinity, temperature and turbidity affect oyster larva distribution as well as tides, winds and sea currents.

My shipmate, in the meantime, had retrieved a chicken wire basket from one of our wooden stake markers in front of the ship. The test bag contained twenty oyster shells that would hopefully serve as setting grounds for mature oyster larva or spat. Spat takes about three years to develop into a full grown oyster. The lab men would examine test bags not only for spat counts but also for any type of interfering organism crawling around such as starfish or oyster drills.

The Julius Nelson chugged through choppy waters stopping every half hour or so for a "station." Between stations I would put specimens in order or simply watch distant tankers or the shorelines of New Jersey or Delaware. After lunch I dozed off between stations, and when the ship pulled up to another laboratory stake, I wasn't quite sure just where we were. I sleepily pulled up a test bag attached to a concrete block anchor, and suddenly an ugly toad fish leaped out of the block at me. Its method of attack startled me so that I lost balance and started to hop on one foot and tripped over the bow line to go head first into the muddy Delaware Bay. That woke me up fast and gave the crew a good laugh.

Soon after I climbed aboard, the captain steered toward our last destination of the day--a test oyster bed. While the Nelson plied through the waters, we took turns at the wheel and watched the bright red bell buoys clang melodiously as our brown-white wake hit them. We lowered an iron dredge over the stern and proceeded to dredge with a taut cable overhead. After several minutes we turned on the power winch to pull the dredge to the surface. Its iron teeth had raked up a good sample of salty smelling healthy oysters, some crabs, seaweed and a few deadly oyster drills. If our beds had a high percentage of drills, we would have to inform the oystermen who had nearby beds to rake their oysters with a special dredge having finer teeth to reduce the attacker's population.

With the Nelson's bow pointed toward Bivalve, we all started to swab down the ship to make her clean looking coming back to port. Some thunderheads developed and light rain sifted through the sky and pelted the glassy surface of the bay. Rain actually helps oysters as it brings rich minerals and algae washed down from inland streams for nourishment. We reached Bivalve Harbor by sudown and looked forward to a nice meal and a night's rest before another hard day's work out on the Delaware Bay. The next time you eat some oysters, think of all the work that goes into it.

Readers interested in getting down to Bivalve, New Jersey should drive NJ Route 55 directly south of Camden (across from Philadelphia) straight down to Port Norris just a few miles north of Bivalve. I had the occasion to work two summers in Bivalve back in 1954-55 when I was a teenager. 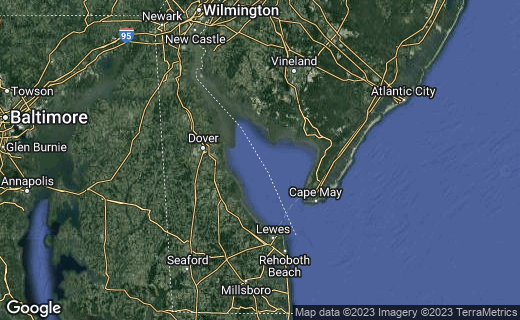