Minorca is one of the Balearic Islands that belong to Spain and are situated in the Mediterranean sea.

The four main islands, part of an archipelago, are Formentera, the smallest, Majorca, the largest and Minorca and Ibiza. The last two are similar in size, but Ibiza has the larger population, and these two island are in reality very different.

Minorca is a favourite destination and we are becoming familiar with the island, its people, its attractions, its way of life and its beaches.

There are so many great beaches dotted around Minorca and the one at Arenal d’en Castell is just one, but what a beach it is.

Arenal d'en Castell for us had always been a rather brash looking resort which we passed through as we made our way to the lovely fishing village of Fornells on the North coast of the Balearic Island of Minorca.

Yes, Arenal has a great looking bay and long sweeping beach of golden sand but surely it was just too commercial for our tastes?

We held that view for a couple of years until we finally decided to hop off the bus at Arenal and see for ourselves what this resort had to offer and we were very pleasantly surprised.

Beach loving tourists will be spoiled for choice on the Spanish Balearic Island of Minorca, a small island which has a great deal to offer apart from beaches. but if you yearn for soft golden sands look no further than Arenal.

The soft sandy 700 metres long beach at Arenal d'en Castell on the north coast of Minorca was a treat to visit and is now a firm favourite.

In fact having avoided this resort on previous visits to this island, for numerous reasons, we now view this beach as a Minorca firm favourite.

A drive through Arenal highlights Irish and English pubs and bars, a busy beach in a commercialized setting and many things we do not like.

Visiting Minorca in early October 2014 however we took a chance on a visit to Arenal and were more than pleasantly surprised.

The bay is dominated by a huge hotel which is a throwback to earlier days before conservation and environmental concerns took hold.

The beach however still has a pretty setting

When we visited in October 2014 a couple of beach bars come cafes come restaurants were still open for business even though the tourist season was drawing to a close.

As the end of the tourist season and October 31 draws near many establishments including hotels close down. By the end of October most are no longer operational. They re-open May 1, the next year.

The second week in October was surprisingly hot in Minorca 2014 and a day at the beach was very welcome. The turquoise to deep blue waters are fairly shallow and offer save bathing.

A life-guard service operates throughout the day during the tourist season.

Stepping into the shallow waters at the edge of the sand a swirl of small fish circled my feet and legs. Stepping out to slightly deeper water slightly larger fish were easily spotted as shoals swam around enjoying the mild weather.

The beach had sun-beds situated at either end near hotels, cafes and bars and in high season more are available. We opted to lay on our beach towels but prices at other Minorca beaches are reasonable for a sunbed and the same for a large parasol big enough for two.

Some say Arenal is an expensive resort but perhaps that is if you opt to base yourself here or maybe the good prices at the beach front restaurant were because the season was drawing to an end and trade was few and far between.

Further visits have been in May and September which is also classed as low season.

In May 2018 the weather was beautiful when we visited Arenal and the beach-side restaurant served an excellent Spanish omelette for at great price.

We hired two sunbeds and a parasol at a total cost of 17 Euros and enjoyed the great weather.

Where Is Arenal D’en Castell 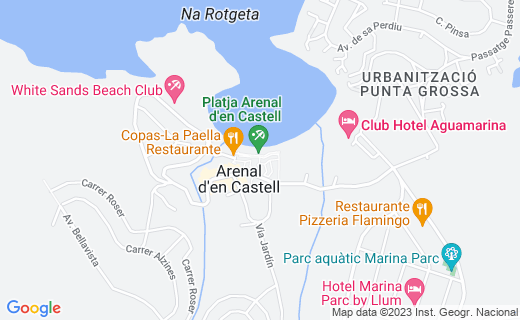