Top Tips for Visiting the The Nazca Lines in Peru

When Were The Nazca Lines Discovered

The world-famous lines of Nazca are a mysterious series of lines and shapes dug into the hard rock of the high plains of Southern Peru. Historical dating of the lines has been estimated to be between 1500 and 2500 years old although modern man only became aware of the lines by pure chance in the 1920's.

In 1927 a Peruvian archaeologist by the name of Toribio Mejia Xesspe was trekking through the foothills of the area. He made some inspections and analysis and presented his findings to a conference, although this was not until 12 years later.

The following year, a historian from the Long Island University by the name of Paul Vosok, with new aviation technology at his disposal, took a flight over the foothills in which Xesspe had seen the lines in the ground.

Vosok first noticed lines that looked to be in the shape of a bird. He later spotted other lines with interesting characteristics and so began the first detailed study of what would come to be known as the Nazca Lines. Today, thousands of people from all over the world come to the tiny dusty town of Nazca to follow Vosok into the sky to gaze down at the network of lines.

Who Created the Nazca Lines

I’ve often heard people claim that the Peruvian Nazca Lines are the unofficial eighth wonder of the world. I’ve heard that about a lot of places including, amongst others, a 2000-year-old Banyan Tree in Yangshuo County, China. I’ve seen this tree and if it really is 2000 years old then it’s mighty impressive. Eighth wonder of the world impressive? Not a chance! As for the Nazca Lines? No, not really.

I don’t know why the Nazca people created all these lines out in the desert, and neither does anyone conclusively have the answer. I’m fascinated by the Nazca Lines theories though. My favourite one is the alien astronaut theory: the one that alludes to the Nazca people being in communication with aliens and that these lines are landing strips and messages to the people from the outer worlds above. When I travelled to Peru I knew that I'd make a stop at Nazca and do a flight over the Nazca Lines.

Where are the Nazca Lines 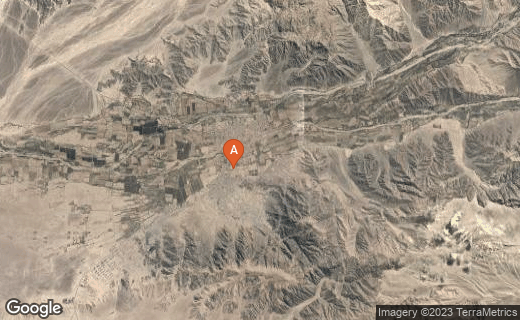 Location of the Nazca Lines

The UNESCO World Heritage Site of the Peruvian Nazca Lines is located just outside the small dusty town of Nazca in in the Ica region of Southern Peru. Although the town has an airport, it is principally used for light aircraft operating tours over the site. It's not possible to fly into Nazca on a commercial airline.

Coming from either Lima, 450km to the North, or from Arequipa, 550km to the South East makes travelling by public bus the cheapest option but it is possible to hire a driver or to join an organised tour. The area in which the Nazca Lines are located is a high Andean plateau which is hot, dry and generally windy. This has the resulting effect that the landscape doesn't 'weather' and has pretty much remained the same for thousands of years. It's little wonder then that the Nazca Lines have remained wonderfully intact since their construction almost 2000 years ago. It's just another intriguing aspect of the mystery into their origins: did the Nazca people know that the lines they were creating would potentially be preserved for thousands of years?

When I travelled through Peru I arrived in the little town of Nazca at 7.30am on an overnight bus from Arequipa. I’d heard that the touts would harangue us at the bus station to try and sell us tours with their pilot 'uncle' or offer us a room in some tin shed. The touts were there but I walked on by and took a taxi straight to the airport.

At the airport I approached the sales desk of each company to obtain information and prices. I did my best to try and play them off against each other to get the best price. I never was much of a negotiator though so I quit whilst I was ahead after getting five bucks knocked off the first price I got. I was happy with the price though.

I’d been told that many people had paid almost twice as much as the $75US that I paid and what was even better was that I got to go immediately rather than having to wait around for other seats to be sold: our plane was full and ready to take us up into the air to explore this fascinating and mysterious phenomenon.

The Nazca Lines flight took about 30 minutes. It was a little bumpy in places and hot as hell: I had a few waves of sickness pass through me but managed to hold it down. After all I hadn’t eaten anything for 13 hours or more. The pilot handed us each a glossy Nazca Lines map that showed the route we were taking and all the different shapes we were going to fly over. These included all the popular ones such as the monkey; the bird; and the astronaut etc. I had my digital camera in my hand ready to take lots of photo's.

The Ancient Alien Question: A New Inquiry Into the Existence, Evidence, and Influence of Ancient Visitors
I enjoy reading books like this for the entertainment value. I don't necessarily believe in these theories as I go for the more scientific evidence-based approach but it's a fun read and fun to let your imagination get some exercise. Includes references to the Peruvian Nazca Lines.
Buy Now

Flying Over the Nazca Lines

The Lines of Nazca were surprisingly hard to spot. I kind of thought they’d be really bright white lines but in reality the whole terrain below is just a single sandy yellow. You have to look hard to see the indentations of the Nazca Lines. It’s cool when you do see them though.

They’re not as big as I thought they’d be either. Some of the geometric shapes and the continuous lines though, they go on and on and cover a huge distance. It really makes you think about the mystery as to why they're here and what their intended purpose was when you're up in the sky seeing these huge shapes on the ground. Just what were they built for?

Do you believe in the Alien Astronaut Theorres?

When the flight was over transport was provided back to town. The town of Nazca is dusty, dirty and dull. We had no intention of staying so we asked a chap to direct us to the bus to Ica. He pointed over to a bus waiting on the side of the highway. We ran over with our bags and just made it on board before it pulled away. All in all we were in and out of Nazca within 2 and a half hours and on our way to the next town.

If you enjoyed reading this article and/or you found it interesting I'd love to hear from you. Please leave a comment below. If you would like to read more about activities in Peru and see some more of my practical guides then please click on one of the links below.