A Cross Country Road Trip is More Than A Ride

There is no better way to get to know a country and its people than from behind the wheel of a car. I love road trips and having made a couple across the United States from East to West, I think that I am going to propose a North American Road trip with stops at some offbeat tourist attractions, as a perfect way to get to know the United States. Even if you have visited before, you will get to know the United States and the American people in a whole new way. Canada is also a great North American candidate for a road trip, but given the murders and drug activity in northern Mexico, I'd say save the Mexican road trip for another time.

Basic Information Before You Go

The distance from New York to California is around 2500-2800 miles depending on how you go.. It's possible to drive it in two days at 80 MPH, driving straight through,switching drivers and sleeping in the car with minimal stops for food, rest and gas. But this is hardly any way to see the country and only for the young and strong. As a tourist, you need to allow at least a week for the trip and two weeks would be an even better idea if you want to poke around and make side trips.

I'm going to assume that you will start your journey either in New York City or Washington DC. Both are major entry points and full of major tourist attractions well documented elsewhere. Plan to spend a couple of days in your arrival city, see the sights, and arrange to rent a car there. Wherever you are coming from, plan to drive the car to the West Coast , drop it off there, and fly home. Trust me, you are not going to want to drive all the way back to the East Coast, even if you take a different route.

If your party consists of one or two adults and you plan on staying in hotels and motels along the way, rent a hybrid or smaller car to save on gas. If you are a larger group, or a family, you might want to consider renting a van that you can sleep in or an RV. The rental and gas costs will be much higher, but you will save on motel and restaurant costs. The choice is yours.

Some Recommended Stops On The Road

Coming from either New York or Washington, you will head out and probably end up on The Pennsylvania Turnpike, America's first super-highway. As you cross the mountains of Western Pennsylvania you will find stunning vistas and several tunnels which, when they were constructed, were the marvels of their day

If you are interested in architecture or design, I would highly recommend a stop at Falling Water, the magnificent house designed by Frank Lloyd Wright for Pittsburgh retail magnate, Edgar J. Kaufman. The house is positioned over a waterfall and nestled into a spectacular woodland setting. There are regular guided tours through the house and grounds. It takes a little advance planning, but the place is well worth a visit.  If you are a city type, consider spending a day and a night in Pittsburgh and enjoying a good hotel and the nightlife as well as several excellent museums and a bevy of shops.

By now you have left the Pennsylvania Turnpike far behind and you are on I-70, a huge interstate you can take all the way to Utah where it ends. Like the pioneers in covered wagons, you have crossed the Appalachian Mountains and come out into the openness of the rolling farmland of Ohio and Indiana. You are now officially in the heartland of America.

If you are following my route, you will Leave I 70 for I-74 at Indianapolis and proceed across the state of Illinois to the banks of the Mississippi River. The main crossing is at St. Louis and if you want to enjoy St Louis with it's night life and good restaurants, by all means stay on I-70 and cross there. You will find lots to entertain you in St. Louis and its environs and then push on to Kansas City and beyond. I like to cross further north on I-74 which takes me across the river into the town of Hannibal, MIssouri, the birthplace of Mark Twain. Hannibal is a town I would not miss seeing for anything. It has wonderful Victorian architecture, fabulous views of the Mississippi and a beautiful park overlooking the river. It is small and sleepy and has changed little since Mark Twain lived there. Well, that's not entirely true. These days, almost every shop in town is named for Mark Twain or a character in one of his books.... there is the Becky Thatcher Book Shoppe and you can eat at the Mark Twain diner and oh yes, you can tour the great man's childhood home, but it is all fun and very very American.

From Hannibal it's an easy drive on small back roads( the kind we love on a road trip) to Kansas City, where you will cross the Missouri River into the state of Kansas. Here, where the buffalo roam, you can check out Dodge City and Abilene where thousands of Texas longhorns met the railroad cars that shipped them back east, and thousands of cowboys got themselves bathed, shaved and liquored up at the end of the trail. Folk artist ,M.T. Liggett , is just outside of Mullinville.. Go see his work if you have time. If not, head on down south through the Oklahoma panhandle , West Texas to Albuquerque, New Mexico.

You are going to want to spend a couple of days in Albuquerque, at least. It is a magical place. For starters, it's in the mountains and the climate is wonderful all year round There are spas, golf courses, hotels and restaurants to die for and a multicultural ambiance that is just amazing.

New Mexico was once part of old Mexico and the Spanish influence is ancient and ingrained. Native peoples are in evidence as well and the pot pourri will take away any Anglo-centric bias you ever had about the United States. Europeans and Native Americans were living and trading here long before anybody landed on Plymouth Rock. Explore and enjoy for as long as you can. Then get back in your car and head west to Arizona.

Arizona and The Grand Canyon

I recommend you stop in Phoenix and make it your base. Take day trips to Tucson and the Grand Canyon. The Grand Canyon is a 4 hour drive from Phoenix, so I take that back..... you might want to spend the night and really see the place because it is really spectacular.

There are also a number of fascinating archeological sites. Phoenix has a knock your socks off art museum and adobe architecture in the old part of the city that is absolutely wonderful. San Xavier del Bac, an old Spanish mission church dating from the 18th century is located near Tucson and is worth a day trip on its own. If you are into food and night life, Phoenix has plenty of that too . There is tons to see and do depending on your tastes and the time you have to indulge them.

Eventually, you will have to tear yourself away from the joys of the desert, get back in the car and drive to California. Now, California is huge in itself and you are not going to have time to really see much of it. The best and nearest end point for your journey is Los Angeles, the city of angels and major metropolis of the West Coast. You are just not going to have time to see San Francisco or Seattle. If you have a few days to spend, you might manage to squeeze in San Diego or a day trip to Mexico but really, you should spend a day or two in LA if you possibly can.

Don't you want to see Hollywood. stroll down Rodeo Drive and do a little shopping? Of course you do. Turn in your car and spend a day or two taking in the big city before heading out to the airport and back home. Hope you enjoyed the ride, got to know a bit about the United States and will want to come back again someday.

Food for the Road

Roadfood, 10th Edition: An Eater's Guide to More Than 1,000 of the Best Local Hot Spots and Hidden Gems Across America (Roadfood: The Coast-To-Coast Guide to the Best Barbecue Join)
Buy Now 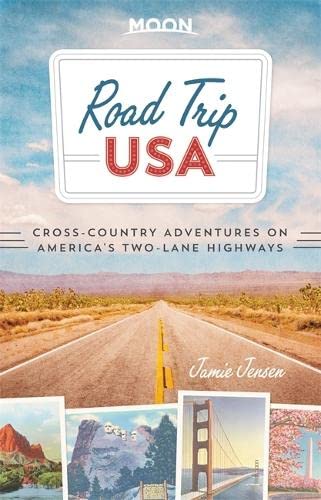