Exploring the BackRoads of Oregon--An Oceanside Treasure in Oregon

All this and more, describe this quaint little community called Oceanside in Tillamook County, OR.
If you want beautiful ocean views, an uncrowded beach, good home cooked food with fresh seafood featured as "the catch of the day" then this is a place you should definitely check out on your travels through Oregon.

The 2000 census shows Oceanside’s population as only 326 as most of the inhabitants of this unincorporated community are summer dwellers who live in the beautiful homes on the hill with windows overlooking the Pacific Ocean.

The Schooner Inn in Oceanside, which is open for business year round, is owned by the people who have operated the Schooner Restaurant in Netarts, OR., the closest neighboring town, for many years. The menu consists of appetizers, soup, salad, burgers, sandwiches and entrees of fresh seafood and more.
On my visit, a friend and I enjoyed a delicious Mushroom Fontina Cheeseburger with Homemade French Fries for only $8.50 each. The dining area is small, quaint and very clean. The staff was very friendly and the service was excellent.
They have hotel rooms upstairs which can be rented by the day or week. There is also a separate bar area.
Just across the street is the beautiful Pacific Ocean, in fact, as you sit and enjoy the food in their dining room, you can take in the magnificent ocean view.

Visit this link to the Oregon State Parks Whale Watching site. You will find a map of coastal areas where the best whale watching sites might be including the best viewing times.

Three Arch Rocks National Wildlife Refuge is located about one half mile offshore from Oceanside. These rocky islands are home to colonies of Stellar Sea Lions and many seabirds, including Tufted Puffins, and Common Murre. The refuge has existed since 1907 when then President Theodore Roosevelt declared the Three Rocks area a National Wildlife Refuge.

Other things to see close by are the Cape Mears Lighthouse, which is a beautifully restored 1890’s lighthouse 200ft above the ocean. The Lighthouse is open for inside viewing by the public free during the summer months.
The Octopus Tree can be found on the same site. This tree, which is actually a giant Sitka spruce with branches growing out in the shape that reminds one of an octopus, is said to actually be one of several Indian Ceremonial Trees that was so fashioned by the Coastal Tribes of the Pacific Northwest. These two interesting sites are only a 3 mile drive from Oceanside. 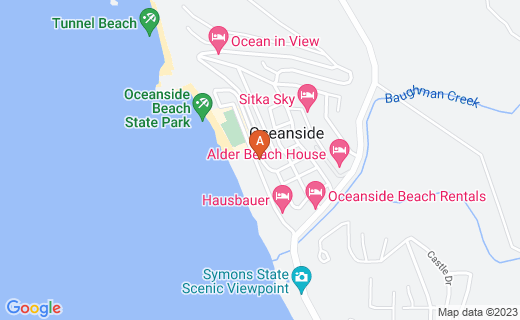 I am sure you will enjoy your visit to Oceanside and its surrounding area, and I believe you will agree that it is indeed a true "Oregon Treasure" full of beauty and goodness that is off the beaten path, one only found while exploring the BackRoads of Oregon.
For more information on the history of Oceanside visit the Oregon Encyclopedia link which is listed in the helpful links capsule on this Hub. It lists some quite interesting facts about this little place called "Oceanside".