To Loolkandura; The First Tea Garden of Sri Lanka.

The journey is not yet over. You can enjoy the beauty of the mountains along the road to Galaha, winding around and through the hills. Galaha Road is very much an ordinary village road which is not carpeted. It runs through small settlements, tea plantations, and jungles, all the way to Rikillagaskada.

The Entrance to Loolkandura Estate 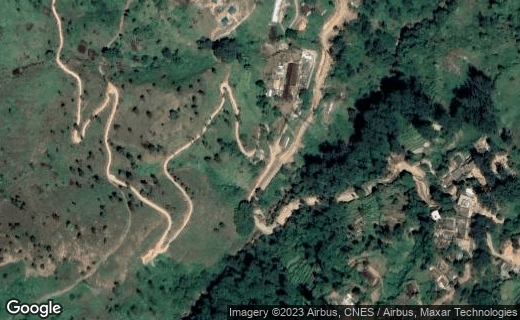 From Galaha, after a few kilometers along the Deltota-Rikillagaskada Road, the entrance to Loolecondera Tea Plantation is reached. You can see this place right at the centre of the map above (the 'Y' shaped junction).

The white road that goes winding towards the left of the map is the path that leads to the first 5 acres of tea planted in Sri Lankan soil, by the Scottish immigrant James Taylor almost one and a half centuries ago.

James Taylor was only 17 when he came to Loolkandura, Sri Lanka in 1852. A modest plaque in the premises of his old log cabin today says that he was a strong and big-built man, weighing 246 pounds (111.58kg). It is a believable fact when looking around and thinking how he would have reached the place, cleared the jungle, and made a place for him to stay for the rest of his life. Remember that it was 150 years ago, and the best vehicle he could have taken was possibly a horse. It needs a great deal of courage for a man (in Sri Lankan standards, a boy) of 17 years to migrate to an unknown country and begin living at a jungle-covered mountainous place like Loolkandura.

James Taylor has used the verandah of his log cabin as the 'Factory' to prepare the fresh tea leaves from his small plantation into that nice-smelling black powder which eventually made the famous 'Pure Ceylon Tea'. His first product was hand-rolled on table, and was sold at a grand price of 1.50 Rupees in the local market. The first overseas shipment of 'Loolecondera Tea' was just 23 pounds. In 1872 James Taylor had a complete tea factory fixed at Loolkandura and escalated the production to over 22 tons.

James Taylor died on 2nd May, 1892, aged 57 years. The plaque about him says that he remained a bachelor, and his first and last love was 'Loolecondera'.

James Taylor could have been homesick, for sure. He very well could have named his plantation with some Scottish village's name, to remember his childhood. The planters who followed James to Sri Lanka named the plantations they started, with names of their overseas neighbourhoods. But the notable point is that he continued using the local name Loolkandura ('Loolecondera' as he spelled it) for the historic Tea Plantation he began.

In 1892, James Taylor's funeral could have easily been held at Loolecndera Estate. But the history says that his coffin was carried by twenty-four men, comprised of the labourers and their leaders of Loolkandura plantation, from Loolkandura to Kandy, a walk about 35 kilometers, which can be the longest funeral cortege in the known history of Sri Lanka. They walked from 8.00 am to 4.30 pm that day to bury James Taylor in the Mahiyawa Cemetery in Kandy.

A nice place to have a bath.

At the entrance of Loolkandura plantation, there is a Hindu kovil by the side of the main road on the bank of a stream. This stream makes a nice bathing spot, with shallow water, cool and clean. You can have fun here, but please do not litter your garbage at this gift of nature.