A Quick Look at Kamakura, Japan

Japan is one of my favorite countries to have ever visited. This is a a few day spent in Kamakura, Japan.

During my US Navy days, I was privileged to visit Japan many times. Being in the Navy, I did typical sailor things like drinking (to the foam), partying (not a surprise there), and getting into mischief. A few times though, I got to visit the great seaside city of Kamakura. It is one of the few memorable places I have been to in my life and apparently it is a really popular tourist destination. With its rich history, a fine beach, and an awe-inspiring temples, I definitely would recommend a holiday there.

Map of Tokyo to Kamakura 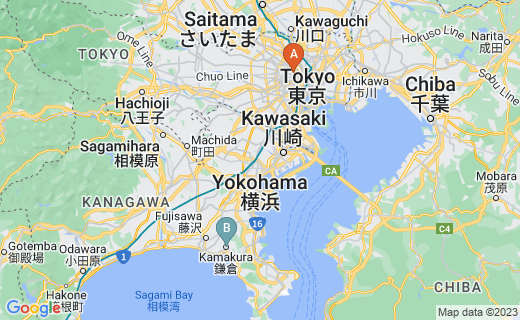 How to Get There

The easiest way to get to Kamakura from Tokyo is by train. In fact, that's how I got there (being that my starting point was normally Yokusuka Naval Base). You will have to find the Yokusuka Line and there will be a direct ride to Kamakura. Once you arrived at the stop, you can take a taxi to sightsee the town but it is better to just walk to the points of interest, you will get a better experience of the town. The town is not that big and there are plenty of places to eat, drink, and shop if you want to take a break from your walkabout.

I'm sure there are plenty of things to do in Kamakura but I only did the three things the town is known for. Visiting the beach, visiting the temple, and visiting the Great Buddha. The beach doesn't seem anything special but there is always something going on there during peak season. The temple was a very spiritual place that humbles even a cynical agnostic. The Great Buddha was massive and eyecatching. I will expound on my experience at all three places.

My day at this beach (circa 2007) was very memorable for all the wrong reasons. Maybe wrong is too strong of a word, more like odd. I was traveling with a few other sailors and were accompanied with a group of local Japanese women one of the fellow sailors knew. They lead us to this beach by way of train and a scenic walk through town.

Once we made to the beach, we marked our territory and scoped the placed out. Not a minute went by and I was ambushed by a bunch of Japanese guys. Yes, guys, that's what I said. Back then I was a really fit sailor. Strong, slim, and defined if I may humbrag. These guys bumrushed and surrounded me. I was shocked. My friends and the Japanese ladies were laughing at my expense. The Japanese guys were amazed at my physique. They kept shaking my hand, some hugged me all the while saying I had a good body or nice body. It was very surreal to me. I was just stunned at the unwanted attention I got.

Day at the Beach

After that invasion of personal space, I managed to enjoy the rest of my time at the beach. The beach was packed with beautiful people. A staged Muay Thai fight propped up for the beachgoers' entertainment. Live music was playing and plenty of food and drinks to be had. There were several bars on the beach and even a live petting zoo. Overall a solid day at the beach.

At the end of the day, it got as weird as it began. There were some guys that got in a huge brawl and eventually cops broke it up. It wasn't just a few guys getting in a fight, it was about twelve guys, and these were the same guys that came up to me and said I had a nice body and tried to grab me. The Japanese women we were with were assuming they were Yakuzas. I don't know if that was true but it sure adds to the mystery. Besides all that, Kamakura Beach was a pleasant time and I would go back in a heartbeat even with the "Yakuzas" in my face. I have been to more beautiful beaches all over the world but this is one of the few beaches where it was lively all day.

On a separate day, I went to Hasedera Temple in Kamakura with a Navy buddy. If it wasn't for him, I wouldn't have went there at all but he wanted to check it out and in the Navy, you have to always partner up when you hit town because of safety precautions for the sailors.

Hasedera Temple is a Japanese garden as well as a temple. It is a tranquil space that feeds your spirituality. The temple and garden are filled with colorful flowers and have many statues of Buddha in all shapes and sizes. There is a majestic temple devoted to the buddhist deity of Kannon.

*There are fees to get into the temple. Here is a link to the price of entry as of now.

Another must-see image Hasedera has to offer is the Benten Kutsu Cave. Visitors can walk through the cave and check out all the statuettes and reliefs inside the cave. The cave is well lit with an abundance of candles but you still have to watch your head. I'm not that tall but I still had to walk hunched over to see all of the cave.

The temple was a wonderful place of heritage, culture, and spirituality. It is a definite place to visit if you are in the area because you can sense Japan's history. It is like walking back in time to the Kamakura period. Then you realize 'the Japanese love them some Buddhas, mang.'

*There is an entry fee of 200 yen as of now for the grounds of The Great Buddha.

The Great Buddha of Kamakura is a must see just like the Reclining Buddha in Bangkok and the Christ the Redeemer in Rio de Janeiro if you are into looking at giant statues of deities and wanting to feel minuscule and modest but still pious.

One thing that is unique about the statue is that you can go inside the statue. It is hollow. There is nothing much to see if you just glance inside but if you have a keen eye you can see how the statue was constructed and the durability of the material. It's worth a look.

In and out of the Great Buddha

Overall the park grounds of The Great Buddha was serene even with the crowds. Looking at this giant statue makes you reflect on your life. No matter what happens to this statue, as the time goes by, as the weather wears it down, the calm pose and face will withstand. It is pretty much a metaphor for how you should handle your stress.

There are many temples other than Hasedera in Kamakura. If I ever get a chance to visit this quaint seaside city, I will have to visit the other temples. There are many other things to do in this city if temple hopping isn't your thing. There are hiking trails, museums and parks amongst other activities that city has to offer. Kamakura will always have a special place in my heart. Be warned though, watch out for the "Yakuzas". Semicolon parentheses -- ;) j/k just kidding if you didn't get the sarcasm.