Our National Parks: A Strange Switch: A Short Story Set in Early Yellowstone

He held up his rifle and aimed at the poacher who was about to shoot a bull elk. But he still had a difficult time saying what he was ordered to say in this situation:

"Halt in the name of the law! You're on federal territory preserved for the American people!"

It didn't make any sense to him having to say that. He half wished the poacher wouldn't listen and go right on with his poaching. But this man looked mean; he looked like he was going to go right ahead and shoot that bull elk anyway, even though he was in the newly established Yellowstone National Park. Damn it, he thought to himself. The poacher is as white as I am yet here I am tellin' him he can't shoot what he fought the Indians to get--freedom--freedom of the wilderness.

Sam Atkins, a red-haired U.S. Cavalryman forty years of age, had been stationed at Fort Laramie twenty years earlier. He had seen action on the frontier, lots of action. He figured that he had killed over thirty-five redskins during his twelve years at Fort Laramie that had the purpose of protecting immigrants along the Oregon Trail. Those Sioux Indians were real devils from his perspective. Just why those savages didn't respect the Treaty of Fort Laramie in 1868, only a few years ago, he couldn't understand. So what if their so-called sacred Black Hills that they called Paha Sapa Wakan had been taken away! Why shouldn't they be if gold was discovered. You can't tell me people have to have mountains to practice a religion in. That's what churches are for. It's nothing than pure paganism to practice religion in the mountains. Mountains weren't important to Christians as far as he knew.

He remembered capturing and shooting some of those Sioux devils up by Laramie Peak. His interpreter told him that one of them was called Atanka Wakan or Sacred Bull; he was doing some damn fool thing referred to as "crying for a vision." Sam tore down a pagan pole set up in a circle of stones near the summit of Laramie Peak. The savage had the nerve to say that this was the peoples' land and that the Army had no right to stop him from his prayers. That savage clown was stark naked with nothing more than a buffalo robe that he carried at his side. Crying for a vision, my foot! Sam remembered asking him what he saw in his vision. He was told that Atanka Waqkan saw the morning star blink four different colors representing the four ages of man. Big deal! Only a savage mind would come up with something like that.

When the savage refused to come with him, he shot him in the stomach and let him die in agony below his sacred circle of stones. The lodgepole pines hissed in the wind as Sam Atkins with a few cohorts headed back to Fort Laramie winding down a steep trail with their horses snorting and occasionally losing their footing over loose rocks. He thought to himself that he had helped protect those Oregon Trail immigrants and that one more dead savage would make way for progress. One day the whole Dakota Territory would be civilized with decent folks in towns like Rock Springs.

But this poacher sure looked mean.

"Halt in the name of the law. You're on federal land preserved for the people!" Sam shouted again.

The poacher did nothing but take a surer aim at the bull elk standing in some subalpine willows along a stream that ran into beaver ponds full of rising trout making slowly spreading circles.

Sam thought of the time he rode out on the prairie with Company C back in the 1850s just after he got stationed at Fort Laramie at the junction of the North Platte and Laramie Rivers.

Sam was riding hard kicking up lots of dust when he spotted a lone human figure high on a prairie mound fringed with light green sagebrush and sharp-pointed yucca. He told the Company he was going off to scout something suspicious looking. It wasn't long until he saw that it was a young Indian woman gathering some sort of plants--probably up to some kind of strange savagery. When she saw the Cavalryman, she started running like a scared rabbit. He rode up alongside her and ripped off her buckskin dress making her naked. Sam had his fun with her threatening her with a sabre all the while; no matter how much she screamed and shrieked, he kept on having his fun. For Sam, savages had no rights as long as they remained savages and uncivilized. Boy, those were the days!

But this mean looking cuss just fired away point blank at that bull elk and gut shot him. Sam stared in amazement and shouted:

"I'll have to arrest you in the name of Yellowstone National Park!" And that mean cuss just laughed at Sam--Saqm Atkins, U.S. Cavalryman and Indian fighter of ten years ago! It was too much for Sam and too confusing.

When Yellowstone National Park was established in 1872, there was no such thing as a National Park Service, and so the government stationed a contingency of U.S. Cavalrymen in the Park to protect it from poachers and miners. It was sort of a Black Hills in reverse. While some cavalrymen were stationed in the Black Hills to protect the white miners from the red savages of the wilderness, he and his cohorts were stationed in the savage wilderness to protect it from white exploiters. But Sam managed to console himself with "My country, right or wrong." The strange switch was that the country didn't seem to know right from wrong when it was doing one thing here and quite another someplace else.

It wasn't confusing back at Fort Laramie in 1858. He remembered riding along with Company C. Sam carried the colors proudly. God it was good riding along chomping on a cigar and carrying the flag of his country. They waved at a passing train of Oregon Trailers. Sam felt great when a little blond-haired boy shouted,

Sam reached in his pocket and gave the boy a spare brass button.

"Gee thanks, mister! Daddy, look what the soldier gave me!"

Yes, sir, those were the days. I was respected then. Here in Yellowstone I feel like a bit of a fool. Why the heck should I be protecting the wilderness when we fought so many hard years to conquer the wilderness? Imagine protecting woods and geysers for the American people! We should develop this place and use the timber for folks settling the West. But he had to arrest this ornery poacher in the name of the law.

Sam Atkins always was a loner back East when he lived with his domineering farm folks in Ohio. By the time he grew his red moustache, he left his farm one night and headed west all by himself. As far as he could tell, his father never did try to find him. But that didn't surprise him; when he was a boy his father never had the time to talk with him and never had the time to take his boy fishing. He always was out in the fields, and his mother was always in the kitchen. The only person who talked to him was his gabbing grandfather who rambled on about how them there Injuns were always frightening honest settlers back when he was a boy.. But his parents never talked with their only son and so he left them. All they wanted to do was work that dirty old farm and nothing else. He heard of cavalry out West and left in 1851. Once he crossed the Mississippi River at the high wooded bluffs of Prairie du Chien, he knew he was getting out to the right country. And the rolling prairies of South Dakota did something for his soul. A few years later he was stationed at Fort Laramie. Each time he shot at marauding Indians frightening the white settlers along the Oregon Trail, he felt powerful and significant. Yes sir, those were the days.

"I have to place you under arrest partner. You shot an elk belonging to the American people. I have to follow my orders!"

"I am an American and that's my elk you dumb fool," the poacher shouted back. "This here wilderness is mine just as much as yours!"

"Well that ain't how the law reads, but I sympathize with you partner."

"You sympathize! Ha, that's a good one."

Just then the poacher raised his rifle lightning quick and fired hitting Sam Atkins in the chest.

"So much for your sympathy!" the poacher shouted, his face shining in the setting sun.

The land slowly darkened for Sam Atkins. He couldn't understand why a white man would shoot him, but then he didn't have much time left to think; he was aging fast. Blinking evening stars peppered the sky above and he could hear the distant roar of Yellowstone Falls. Sam tried to crawl over to his rifle but lacked the strength. He clutched a clump of sweet elk sedge in gis right hand to raise himself a bit and feebly looked across at the poacher dressing out the bull elk belonging to the American people.

In fact, the Yellowstone example of having the military protect the park served as a precedent for later parks including Yosemite until the National Park Service was founded in 1916. In writing this story I hoped to achieve a strong sense of historic irony.This story originally appeared in A, a quarterly journal edited by the late William Oandassan, Native American poet of the Yuki tribe. 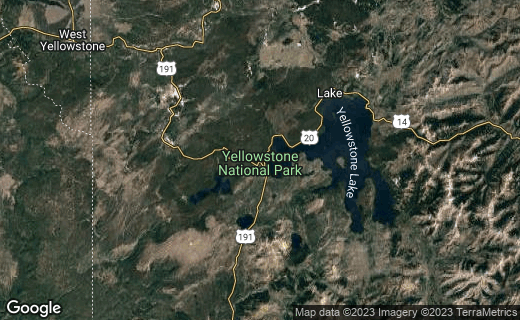