A Visit to Kit Carson’s home in Taos New Mexico

A Historic Home in a Historic City

Museums and historic homes, forts and castles are always great places to visit when traveling.

Kit Carson’s comfortable home in Taos, New Mexico is no exception.  In addition to having been the home of a famous figure in American history, the home itself is a nice example of a mid-nineteenth century, middle class home in Taos.

Taos itself has a long and rich history going back to Spanish colonial times in the case of Europeans and even further back in the case of the Native Americans whose nearby Taos Pueblo dates back as far as the eleventh or twelfth century.

The property is owned by the Masonic Brent Lodge 42 of Taos and is operated by the non-profit Kit Carson Museums.

According to a plaque on the building, Kit Carson had joined the Santa Fe Montezuma Lodge, A.F. & A.M., in 1854 and, in June of 1860 was one of the founding members of the Masonic Lodge in Taos. 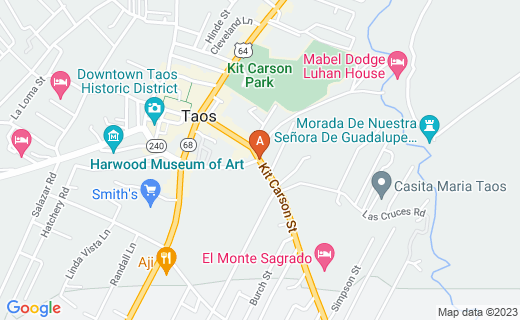 Kit Carson’s wife, Josefa, died in April of 1868 as a result of complications following the birth of their daughter, Josefita, two days earlier.  Josefa  was only 40 years old at the time of her death.

A month later, in May of 1868, Kit Carson died due to an aneurysm of the carotid artery. He was 58 at the time of his death.

The deaths of both parents left their children orphans with seven of them too young (the youngest was barely a month old) to be on their own.  As a result the Taos home and furnishings were sold to raise money to support the children.

Following the sale of the house, subsequent owners let it run down and, in 1909 the Grand Masonic Lodge of New Mexico issued a challenge to the Brent Lodge in Taos to find a way to save Carson’s home in Taos.

The Brent Lodge came up with the money and purchased the Carson home in 1910 but it wasn’t until 1952 that they were able to raise sufficient funds to restore and furnish the home as a museum.

The entrance to the home / museum proper is through the bookstore and for this the fee is seven or eight dollars as I recall. And the visit is well worth the price.

Since my wife had chosen to browse through the shops surrounding the historic plaza up the street in the center of town, I only had to purchase one ticket but it probably would have been cheaper to bring her and pay the fee for her.

It was mid-week in November when I visited and, as a result, I was the only visitor at the time - although another couple was entering as I was leaving.

The tour is self guided and I opted to begin with the 15 minute video of Kit Carson’s life.

The video stared a descendant of Carson (it may have been Christopher Carson III or IV) who, as I recall, was described as a high school history teacher and part time actor. He is a good actor and the movie was interesting.

The video begins with Kit Carson accompanying Major William Grier and a patrol in November of 1849 on a mission to rescue a Mrs. Ann White and her daughter who had been captured by Jicarilla Apaches a while before.

Mrs. White was killed while attempting to escape shortly before the patrol arrived. Laying next to her body was a book that had been published earlier that year by Charles Averill, titled Kit Carson: The Prince of the Gold Hunters.

Carson saw the book and this was when he first discovered that he was famous. While flattering, the book was totally fictitious and this disturbed Carson who was and always had been a modest man whose main concern ha always been trying to make a living and support his family.

Born the eleventh of fifteen children, Kit Carson was forced to drop out of school at age eight to help on the farm following the death of his father. At age 14 he was apprenticed to a saddle maker in Franklin, Missouri which was located at the eastern end of the Santa Fe Trail.

Two years later in 1825 when he was 16, Carson decided he didn’t want to be a saddle maker and ran off down the Santa Fe Trail with some fur traders.

Despite having broken his apprenticeship contract, his master waited a month and then posted a reward of one cent for the return of his runaway apprentice. Carson’s running away obviously was in the best interests of both master and apprentice.

He later said that his years with Singing Grass were the happiest of his life as he lived with her and her tribe while he worked both with the Hudson’s Bay Company and the famous mountain man, Jim Bridger, hunting and trapping.

In 1837 Waa-Nibe gave birth to a daughter they named Adaline. A couple of years later a second daughter was born but died shortly after. This was followed, about 1840, by the death of Waa-Nibe herself which left Kit Carson devastated.

As if being a single father with a young daughter was not enough, Carson also found himself at age 30 in 1840 the victim of economic change.

The after effects of the economic depression resulting from the Panic of 1837 combined with changing clothing fashions in Europe and the eastern U.S. and the decline of the beaver population meant that the fur trade, as far as beaver hides were concerned, was dead. Kit Carson needed both a new wife and a new career.

In 1840 he met and married a Cheyenne Indian woman whose name translated into English as Making-Our-Road.

Unfortunately, her road and Kit Carson’s soon parted as he elected to remain in the market economy of his people working first as a hunter and then as an Army scout while she choose to retain the nomadic life of her people following the buffalo.

1842 was a busy year for Kit Carson as he took his young daughter, Adaline, back to Franklin, Missouri where he entrusted her to the care of members of his family living there.

On his Missouri trip he met the explorer and Army officer John C. Frémont and signed on with Frémont as a scout on his upcoming expedition to the West.

Back in New Mexico, Carson met and became engaged to María Josefa Jaramillo, the daughter of a prominent Taos family.  After receiving instruction from a local priest, Kit Carson was baptized into the Roman Catholic Church and, on February 6, 1843, married Josefa.

Kit Carson and Josefa Jaramillo  Carson had eight children together as well as adopting a total of three young Indian children (actually they purchased each of the children from tribes who had previously been captured from other tribes and then added the children to the Carson family).

After having spent the past 18 years traveling around the west working as a trapper, hunter and scout, Kit Carson wanted to settle down following his marriage.  He also wanted to provide a home for Josefa similar to what she was used to, having come from a financially secure family.

Kit Carson found this home and purchased it as a wedding present for his wife, and they spent most of the next 25 years living and raising their family in this home.