A Visit to the Grampians, Victoria

Bronwen has lived in, taught in, and visited a number of countries and loves to share these travel experiences with others. 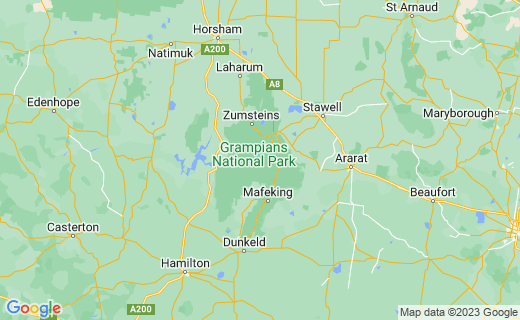 For anyone who enjoys the Australian bush with its lovely its flora and fauna, the Grampians National Park in Victoria is a must. It is situated about two hundred and thirty-five kilometres west of Melbourne and is noted for its outstanding natural beauty. The nearest township is Hall's Gap and the closest larger town is Stawell.

The Grampians were named by Sir Thomas Mitchell in 1836, after the famous Grampians in Scotland. They are a series of sandstone mountain ranges that were formed in Devonian times and are situated in the Western Victorian Highlands Province. They run roughly North-South and the eastern side is steep with beautiful panoramic views from places such as The Pinnacle, while the western side slopes away more gently with views west towards pastoral land and north-west towards the Little Desert National Park. The highest peak is Mount William at 1767 metres and there are several attractive waterfalls.

Australia is a country beset by 'flood and fire and famine' an although huge bush-fires burned almost half of the Grampians National Park only about six years ago, it is already regenerating well as the eucalypts (what we usually refer to as Gum Trees) are designed to sprout again after most fires. Since then, actually in 2011, there were large floods and these have helped with the regeneration after the bush-fire devastation.

How to Travel by Public Transport to Hall's Gap: Some time back we could travel to Stawell by train on the Melbourne to Adelaide line and that service is to be reinstated some time in 2013. However, at the moment, the best way to travel there by public transport is to go by train from Southern Cross Station to Ballarat Central. A good one to catch at the moment leaves Southern Cross at 9.07 a.m. and arrives in Ballarat at 10.33. A coach leaves Ballarat Central at 11.00 a.m., travels via Ararat Station and arrives in Stawell at 12.41 p.m. The coach departs from Stawell Station at 12.50p.m. and is scheduled to arrive at Hall's Gap Information Centre at 1.25 p.m.

The flora and fauna in the Grampians are quite varied. One of the major attractions of the Grampians are the wildflowers and they and the birds are my favourites. Wildflowers include the pink and red heath although there are many others as well. Among the fauna we enjoyed the wallabies and the different birds we saw - and the many more that we heard but were too slow to glimpse and identify. The bush and the wildlife are a delight for anyone who enjoys getting right away from the 'madding crowd.'

The Grampians Bushwalking Company: This group has been taking enthusiasts on bushwalking tours for a number of years. They offer half-day walks that last for three to four hours for those who do not have the time for longer - or the energy to navigate the steep bush tracks! You can see the Bundaleer and spectacular rock formations. The Company also offers full day walks, four-day wilderness walks and will even personalize tours and adventure hikes. This sound a bit like an ad, but we found them most accommodating and helpful.

Melbourne Wildlife Tours: I believe that these are also to be recommended, but we did not have enough time there to sample what they had on offer.

Below is a photograph of one of the waterfalls. It is as pretty as a picture and looks as if it should really be a painting. Although it is a fairly steep walk down to these falls, it is a good path and not very far from where a vehicle can be parked.

Places to Stay and Things to Do in the Victorian Grampians

There is a range of accommodation in Hall's Gap and also in Stawell, with a variety of prices. They include cottages, houses, motels, a back-packers' hostel, caravan parks, cabins, caravans and campers for hire, and if you're a YHA enthusiast, a great eco-hostel in the heart of Hall's Gap. The latter boasts two lounges and when we were there a welcoming log-fire burned warmly, there was a big, clean kitchen and there were even eggs from the hens in the yard for breakfast and freshly brewed coffee.

There are plenty of cafés and bakeries in the township for hungry hikers, an Aboriginal Cultural Centre and the Hall's Gap Zoo with a mixture of Australian and exotic animals.

The best thing to do, of course, is the hiking. The views are varied and stunning.