A Walk in The City of Galle, Sri Lanka.

Galle in Sri Lanka is famous, and so it is not important to tell its location. However, for the convenience of all readers I'll mention the best ways to reach Galle.

Take either Ruhunu Kumari or Galu Kumari Express train from Colombo Fort Railway Station, and get down at Galle. This journey may take roughly 4 hours, with a lot of enjoyable sightseeing along the rail track in a slow moving train. The quicker way is to take a bus to Maharagama from in front of Colombo Fort Railway Station. From Maharagama you can get a bus to Galle which travels on the Southers Expressway to reach Galle in just one hour.

City of Galle and the Ramparts 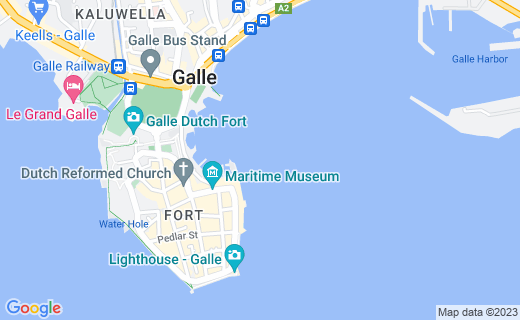 Galle can be thought of being a Habour City since a long time before the 14th century. Its old name was Gimhathittha. The Pali suffix 'thittha' is equal to the Sanskrit word 'thirtha', of which the Sinhala equivalent is 'thota', that is, harbour. When Ibn Batuta visited Lanka in 1344 AD he has mentioned Galle as 'Qali', which sounds close to 'Gali' (Tamil) and 'Galla' (Sinhala).

Galle Harbour had been busy trading with Greece, China and Arabia as far back as 125 AD. That was when Ptolemy marked Galle harbour in his world map. Galle Harbour became a tactical and maritime operations centre after the Portuguese took over it in the 16th century. It stays next to Galle Fort.

The Portuguese built the Galle Fort in 1588 AD. During the mid-16th century, the Dutch captured Galle Fort from the Portuguese. They began fortifying the fort from 1649 AD.

The bed of Galle Harbour is scattered with shipwrecks. The oldest wreck is the Avondster which happened to sink while anchored in 1659 AD. Some of the other wrecks found in the Galle Harbour are,

The lighthouse at the edge of Galle Fort is a highlight in the scenery. It was built by the British in 1848. The British later erected a fake lighthouse on Mount Rumassala which is on the other side of the harbour opposite to the real lighthouse. It is said that in particular nights when enemy ships tried to reach the port, they lit the fake lighthouse which lured those ships to the rocks around Rumassala and perished.

While walking along the Galle ramparts I had the chance to see a young man's amazing jump to the sea water, about 50 feet below. Please have a look at it.