A Winter With Flying Pigs - Top 10 Best Places in Cincinnati

Home of Chili and Fine Dining

The Flying Pig is the local sidewalk art project in Cincinnati, Ohio. Columbus had fancy ears of corn all over town for awhile, a permanent field of concrete corn in the northwest sector, and now, multi-costumed Ohio State University mascot Brutus Buckeye all over the town.

Ohio takes art seriously, but has fun in Cincinnati with its flying pigs, because the pork industry has been so successful in the city. Downtown's Fountain Square even has several permanent flying pigs up in the air in metalwork. You'll find art everywhere in Cincinnati and can spend an entire winter vacation visiting its installations.

Vacationers may be looking for simpler, less expensive getaways for the winter and in the Midwest, Cincinnati makes a good proposition for the choice.

A major 3-C City (Cleveland-Columbus-Cincinnati) on the Ohio River, Cincinnati offers a variety of venues for entertainment, adventure, and relaxation during the winter months. These locales include indoor and outdoor sights and events for a change up as well - anything from a library or museum in town to King's Island Winter Weekends just north of the city, to riverboat dining on the Ohio River. There is no place else like it!

The Big Pig Gig: Celebrating Pigs in the City
This is an entertaining book about the public art works in the Queen City - together called the Big Pig Gig. In Columbus, we had ears of corn, even glittery ears, but the pigs of Cincinnati were more fun, so we all went to look at them.
Buy Now

Cincinnati on the Ohio River 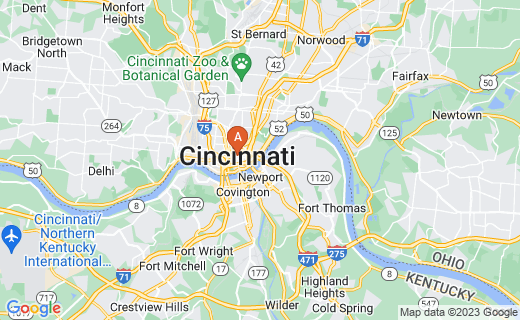 The US Bank Ice Rink
Near the fountains and statues, US Bank sponsors a seasonal outdoor ice rink at Fountain Square in city center to rival that of the Rockerfiller Center in NYC. Skate rental and admission are $2.50 each, so $5.00 is very little for a lot of fun. The rink offers a heated gathering tent with vending machines that include hot chocolate and coffee as well as other treats.

This might be a good way to celebrate part of Valentine's Day and the rink operates through the third week of February.

Fine Dining with a Twist - The Summit Restaurant

Growing in popularity, The Summit dinner restaurant sits on top of a city bluff above a vista of the city. On the way to the dining area, patrons travel past the pastry kitchen and other facilities, because they are inside of the Midwest Culinary Institute at Cincinnati State Technical and Community College. The full service restaurant is a special project in which students serve the cuisine of which they are proud. The high quality and innovation of the recipes and finished dishes make this a showplace among dining sites in Cincinnati.

The menu of the dining room stays up to date. The staff of the Summit stays informed of the latest dining trends and seasonal expectations. The waitstaff are precisely trained for outstanding customer service and it shows.

What a wonderful place to celebrate Valentine’s Day!

The Summit serves dinner Thursday, Friday, and Saturday evenings. Several gourmet dishes, including a gourmet dessert pastry assortment, are offered, prepared fresh to order under the supervision of the college’s Master Chef.

Dinner reservations are very good idea as the popularity of this project grows. They are taken for every half hour on the hour and half-hour beginning at 5 pm at phone (513) 569-4980, or online line at this site. Valet parking is available at no charge.

I have been through Eden Park several times and enjoy it in all seasons. Not only is the landscaping beautiful, but the area is also peaceful and features museums and other attractions near Xavier University. It's location is not far from the downtown area, convenient to stops at Fountain Park. Eden Park is a large area between I-71 and the Ohio River near Downtown Cincinnati.

Inside the park are the Cincinnati Art Museum, Cincinnati Art Academy, Cincinnati Playhouse in the Park and the Krohn Conservatory.It is filled with major attractions, much like the park that was the site of the St. Louis World's Fair. Other venues include the Hinkle Magnolia Garden, a gazebo, a memorial tree grove, walking paths, Mirror Lake, and the well known Bettman Fountain. A magnificent view of the Ohio River and Kentucky are also featured. Sculptures, war memorials, a playground, and tables and benches for rest and chess play are very popular.

Union Railroad Terminal is a piece of Cincinnati railroad history that has become part of the local culture, 77 years old in 2010. The Art Deco styling adds interest to this National Historic Landmark and is featured on many picture postcards. Inside, the rotunda is 107 feet over one's head. IN fact, it si the largest architectural half-dome in all of the Western Hemisphere as of this date. Union Terminal is home to a number of museums highlighting natural history, general history, and child’s play. An OMNIMAX Theater sports a five-story film screen for interesting movies.

Findlay Market is one of the largest covered markets in the Midwest and the longest-lived one overall. Columbus's downtown area market closed down in order to make way for a Holiday Inn and a Greyhound Bus Terminal, finally reopening under cover as The North Market several blocks to the north. Findlay Market has never closed in its 155 years, since 1855, before the Civil War.  All kinds of produce stalls, shops, and restaurants are located inside and tables are provided for indoor picnics.

The Cincinnati Zoo & Botanical Garden is clever in its winter promotions by sponsoring Penguin Days at half-price admission from after New Year's Day to the end of February.

The Cincinnati Zoo was one of the first zoos in America to develop more natural settings for its animal inhabitants, as early as the 1950s and 1960s. Later, it added such features as an expanded Elephant House to give the elephants more room and natural living space, and the renowned Nocturnal House. The first time I visited this installation; a large fruit bat was looking at visitors like a large friendly dog with wings, and hanging up side down. Bats, nocturnal desert cats and desert foxes and many other animals in this exhibit are fascinating. The zoo also remembers extinct animals with a monument to the last living passenger pigeon and educational programs about sustainability and conservation.

The Freedom Center is located Downtown near the Ohio River, the physical barrier that separated slave states the free states before the American Civil War. Exhibits illustrate stories of river crossings and the network of people that made up the "Underground Railroad." Since the summer of 2004, almost one million visitors have toured the center and attended presentations.

The author of Uncle Tom's Cabin, the book Abraham Lincoln told her started the Civil War, lived for a time in Cincinnati and actually based the story on what she observed there in Ohio. The Beechers made their home in Cincinnati for 20 years, from approximately 1832 - 1852 before they went back east, largely to Connecticut.

Stowe House is found near Downtown about a mile north of Eden Park, at 2950 Gilbert Avenue in historic Walnut Hills, just off I -71.

The Cincinnati Skywalk takes pedestrians around the central area of Downtown up in the air in a glass encased walkway, protected from the elements for much of its length. Parts of it have been closed off, but plenty remains for good use in the winter, especially during the day.0

For example, it will take you from the Cincinnati Red's All American Ball Park to the Chiquita Center [HQ for Chiquita brands (bananas, etc.)].to Fountain Square and on to Hotels and shopping, meeting places, restaurants, a mall, etc. Smaller shops close during evening and weekend hours.

A Riverwalk provides 4 miles of walking and hiking paths, ending with a walk across the Purple People Bridge into Kentucky.