A Lasting Connection With Tunisia

The Vacation is Over

It was the last evening of my holiday in Tunisia and I never thought I’d ever return – after all, I’d been there four times already: once on a cruise with the school when I was seventeen and three times with my two daughters who were at this point teenagers themselves.

We had stayed at the Tour Khalef hotel and The Les Orangers Resort in Sousse, Then finally at The Bel Azur in Hammamet.

When I first suggested to my daughters that Tunisia was a great place to visit, I never thought for a minute that they would want to return year after year but now I’d decided enough was enough – life is too short - surely there are so many other places, equally good, still to discover? Every time we arrived at the airport in Monastir, I would say ‘Oh, no! - not this place again!’

Our third summer holiday in Tunisia had been uneventful, perhaps even boring by most people's standards, but we had enjoyed a relaxing fortnight, not doing anything very much. We bemoaned the fact that again we hadn't been brave enough to take a two-day trip to the Sahara but at this time of year, it was wise not to! The hot, sirocco winds blow off the desert like blasts from an oven, the closer you get to it; far more sensible to remain near the coast.

Having experienced the sights and sounds of the souks in previous years, this time, lounging around the immediate vicinity of the hotel was a refreshing change and apart from a half-day coastal excursion, we didn't venture far from the hotel.

The weather as usual for mid-summer had been ferociously hot every single day; the sun scorching every unprotected patch of skin in minutes. It is far windier in Hammamet than further south where the heat is stifling but the cooling sea breeze is deceiving, making you feel safer in the sun than you actually are. Every day we saw a fresh batch of tourists along the seashore, and round the pool unwittingly turning a painful scarlet. Here, even black skins can burn.

I'd already packed earlier that evening, organised as ever but my daughters, far more carefree than I was during my teenage years, wanted to make the most of their last evening and disappeared off to a nightclub with their remaining Dinars, leaving me to panic as to whether everything would fit into our suitcases.

Will they come back in time? I worried. I hate early departures and invariably have nightmares about the airport bus arriving long before we're ready. But my daughters didn't care, still rummaging around under their beds for missing sandals at the very last minute.

We hadn't purchased many souvenirs this time, nothing like the amount of ‘Magic’ carpets, leather goods and exotic glitch we'd weighed ourselves down with in previous years. Funny how they all look ridiculous almost the second you unpack them back home and that camel leather which smells so inviting in the Medina becomes too pungent to tolerate in England. I'd bought a few tins of Halva (a sesame seed delicacy) for my mother who has a whole set of sweet teeth and I’d treated myself to a few pairs of leather sandals. We still had plenty left over cash due to money not spent on trips or tacky gifts.

Having ventured twice on ‘Pirate ship’ excursions along the coast, the only tour we were persuaded into taking this time around was a little fishing boat trip, which in its own way was far more memorable. We laughed when we were promised sights of dolphins or our money back but the tour operator was sincere. We even managed to get near enough to the dolphins to throw them some fish straight from the barbecue at the stern of the boat.

On our last day while the girls were out I spent a contemplative evening on my own, not one for insincere goodbyes to the hotel staff or false promises of certain return. It had been good. I had a well-earned suntan, looked and felt healthier than when I came, thanks to hours in the sea and strolling along the coast every day. I couldn't complain.

I was now ready for home but circumstances were to conspire against me. Early on the morning of our departure, the nightmare began. My eldest daughter, Annemarie awoke in agony and couldn't pass water.

‘Did you drink too much last night?’ was my initial question, quickly followed by: ‘You're not pregnant are you?’

‘No,’ to both questions she assured me. She had mentioned some bother or other with passing water earlier in the holiday, but in a hot climate when you sweat more that isn't unusual and she hadn't mentioned any pain. She became worse and was soon doubled up in agony. Forget the plane, she can't even sit down, I decided.

My youngest daughter, Michelle was best left sleeping. She was never much use in a crisis anyway. So I walked Annemarie the few hundred yards to the doctors where he gave her a pain-killing injection that had no effect. She paced up and down with a nurse in the courtyard as if she was in the early stages of labour.

The doctor advised me to go back to the hotel to phone the Thomson representative. The bus for the airport was due to arrive at 9.30 am and I couldn't see us being on it.

The cash not spent on souvenirs came in handy. There was still plenty left to deal with the unforeseen crisis that was unfolding. I had enough change to phone the travel insurance helpline too as the exchange booth wasn't open yet. Thank goodness I had a credit card as well.

The insurance said they would only pay for a later flight if we made them aware of the situation beforehand so it took half a dozen frantic phone calls to the travel reps and the call centre in England and then back to the doctors. He said Annemarie would have to go to the hospital for a scan. He called a specialist friend who drove her there in his own car as they were both so concerned. I followed on in a taxi, once I'd alerted Michelle to the situation and phoned my husband to tell him there was no point in him going to Robin Hood airport to collect us that afternoon.

I was soon hot and bothered from dashing around in my travelling clothes having had no breakfast or anything to drink when the morning temperature was already soaring.

‘Your daughter has ovarian cyst,’ said the ultrasound technician at the hospital, ‘She need immediate operation.’

Later, crisis over, the surgeon presented me with a strange object that resembled a water-filled plastic bag - like one that contains a goldfish at a funfair.

‘This is cyst... you want take photo?’ he said gleefully, dangling the cellophane bag in front of my eyes. ‘Daughter O.K. Fine... no problem.’ He went on to explain that the cyst had been tested and there was no cancerous material. He also assured me that the operation would not affect future fertility or childbearing.

I was at her bedside when Annemarie came round from the anaesthetic and she was soon sitting upright in bed surrounded by chocolates and flowers from well-wishers at our hotel.

I could now breathe a sigh of relief before making further phone calls and dashing back across Hammamet between hotel and hospital in perilous yellow taxis with no seat belts. I soon had a thumping headache and by the end of the day, I was overheated and violently sick. I still managed to phone everyone, summon up more cash from somewhere and at the end of all this I still received a severe reprimand from my husband for not keeping him informed of the situation - I'd like to see him do any better.

I still had to plead with the hotel reception man for us to keep our existing room for a further ten days, several times having to point out the fact that we were still there. I kept getting locked out as the electronic key no longer recognised my presence. The hotel staff was brilliant, except that chap at reception who demanded two nights' payment in advance before the insurance was sorted.

So, for the next ten days, we remained in Tunisia. Michelle turned a rich chocolate brown, sunning herself on the beach all day and soon learned how to swear fluently in Arabic while her sister recovered in hospital.

Annemarie struck up a permanent relationship with the animator from our hotel when he visited her in hospital, bringing a huge cake and a get-well card signed by all the staff.

I spent those extra days around the pool and beach trying to make the best use of the additional time but even paradise becomes tedious when you know you've overstayed your welcome.

On our return to England, Annemarie made an excellent recovery. The medical reports stated her health was sound and she would need no further treatment.

I had such a traumatic time at the end of that last stay in Tunisia that personally I never wanted to see Habib Bourguiba airport ever again but Annemarie had other ideas: at twenty years of age she had been back to visit her boyfriend in Hammamet over twenty-five times over the past three years since her emergency operation.

Now Tunisia is more like my second home. My son in law’s family has built on another level onto their existing house so we have a lovely flat to stay in now when we visit. I also have two wonderful grandchildren.

Now every time we land at Habib Bourguiba Airport I still say ‘Oh no not again!’ But everyone knows I’m only joking this time.

Our Hotel and Beach Were Both Fantastic 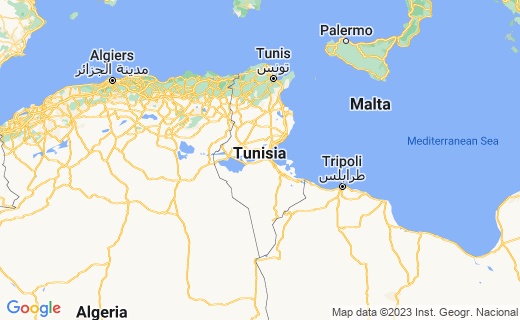 I have had more connections with North Africa than any other region in the world apart from the UK where I am based and view North Africa as my second home. I have a property in Morocco and family connections in Tunisia. I first visited North Africa in 1969 and would happily live there.