A Dream of a Homesick Englishman

This historical mansion, which is commonly known as the Adisham Bungalow, is situated in Thangamale Monastery, Haputale, Sri Lanka. Now a religious house belonging to the Sylvestero-Benedictine congregation of the Catholic Church, the history of this building goes as far back as to 1887, when its creator, Sir Thomas Lister Villiers arrived in Sri Lanka.

Thomas Lister was born in Adisham, Kent, in an aristocratic and religious family of Britain in 1869. He was educated in Sherbone Public School. In his young age, Thomas Lister's restless soul told him to choose adventure rather than doing business or politics in Britain, and so he arrived in Sri Lanka (those days, Ceylon), a colony of the British at the time, seeking adventure.

Soon after his arrival in Sri Lanka, he joined Elbedde Estate, Bogawantalawa, and started the career as a trainee planter there. He managed to purchase Dickoya Group in 1900. Before long, he joined George Steuart Company, Colombo, and became its Chairman in 1928. 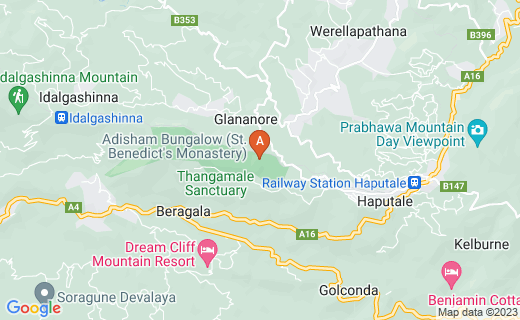 Preparations for the construction of this dream house began in 1929. Sir Thomas Lister chose a far away location, a very peaceful site at Haputale, which is 5000 feet above mean sea level. Adisham Bungalow was built according to the Tudor style, and in the pattern of the Leeds Castle in Kent. Its walls are built with cut-granite stone. The roof is covered with wooden tiles made of Burmese Teak. The other wooden fittings in the Bungalow are also made of Burmese Teak. The construction of the Bungalow was completed in 1931. Sir Thomas Lister grew strawberries, guavas and Seville oranges in the orchard maintained in his 10-acre land where the Bungalow was built. His wife, Lady Evelyn Hope was an enthusiastic painter. Her paintings can still be seen hanging on the walls of Adisham Bungalow.

In 1949, Sir Thomas Lister Villiers retired from George Steuart Company and returned to Kent, England. When he left, he sold the Adisham Bungalow with all attached properties to a Sri Lankan company. Sir Thomas died in Kent in 1959.

In 1961, the Roman Catholic Church purchased the property of Adisham Bungalow with the land and converted it into a monastery. The religious administration of the Adisham Bungalow today maintains the place to the same level as its creator did many years ago. The priests who came to live in Adisham found the old orchards grown by Sir Thomas Lister, and they renovated them to a productive state. Today, the orange marmalade, strawberry jam, wild guava jelly, and fresh fruit cordials produced in Adisham Monastery have earned great fame in Sri Lanka.