My wife and I visited our son who has lived in Alaska for 14 years. Here is an article about our experience. 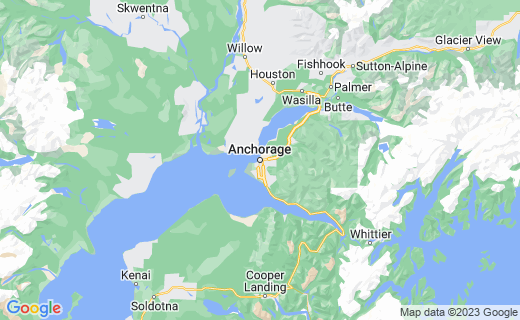 Our son is a 747 pilot for Atlas Air Cargo. He flies all over the world but is based in Anchorage Alaska. He has lived in Alaska for over 14 years. He was an air taxi pilot for many years and lived on the ice with the natives, while flying them from village to village.

My wife decided that we should visit him in the month of January because she wanted to experience what it's like to be in a really cold weather. You have to understand we live in Southern California about 10 miles from Disneyland.

Mama Moose and Her Calves

This picture was taken from the living room at about 7 a.m. the day after we arrived. it's a mother and two calves. You can't see the other calf. It was around the side of the house. They're eating the leaves off the trees for breakfast.

This is the pond that is behind my son's house. There is a path from here that leads all they way into the town of Anchorage. During the winter they cross-country ski on the path and during the summer, they ride bicycles and walk/run their dogs.

This is Hood Lake. During the summer, it is one of the busiest sea plane airports in the world. In the winter, it is frozen over and covered with snow. Planes equipped with skis still use the airport.

We are on our way to the Mount Alyeska Ski Area. This is a picture of the pack ice along Cook's Inlet. Pack ice is frozen sea water. You can hear it crunch and groan as it moves up the inlet. It is dark and mixed with all kinds of debris.

This is the ski lodge with Mt. Alyeska in the background. They have some of the best chicken soup and hot chocolate in the world here. Most of the mountains in the Anchorage area are not that high. It snows at sea level. You think you are at a high altitude, but it's because of the latitude. Mt. Alyeska is only 3,800 feet high.

View of the Ski Lodge from the Summit

This is the view of the ski lodge from the top of Mt. Alyeska. There is a tram that takes you from the lodge to the top of the mountain. The view is spectacular.

This is the observation tower at the summit. From this view point, you can see almost 360 degrees around the valley below. It includes a restaurant where you can get warm food to warm the cockles of your heart. The temperature was about 10 degrees F.

This is a view of the Turnagain Valley from the summit. You can see a beautiful panarama of almost 360 degrees. I would like to show the panarama pictures, but it would probably take up too much space. The reason it is called the "turnagain" valley is that there is a highway that goes to Seward, but make almost a U turn before it gets there.

This is my wife and me at the summit at Flat Top mountain. You can see the city of Anchorage in the background. The wind was blowing very hard and with the wind chill, it was about minus 2 degrees. It was so cold, the battery in my camera stopped working. It was very icy and we had to be very careful walking, The paths were all marked where we could walk. You can tell we are from California and not really dressed for the occasion.

How to Dress for Cold Weather

Our son gave us some tips on how to dress for cold weather. He had us dress in three layers. The first layer is a light layer that will wick away sweat from your skin. The second layer is the insulating layer made of bulky knit materials to keep you warm.. The third layer is the protective layer that shields against the elements. It should repel water, snow, and sleet, and block the wind.

He said the reason that people get frost bite is because they start to sweat and do not have the proper clothing to wick away the moisture from the skin. The sweat freezes and could cause frost bite.