When I tell Americans that I lived in Spain, they often get excited. “Oh! Where did you live? I’ve been to Barcelona 3 times!” Finally, a place they vaguely know the geography of. However, when I tell them “Almería, Spain” the excitement quickly fades and is replaced with that glazed-over look reminiscent of high school and indicative of strange sounding names you will soon forget. Europeans often recall it from the stickers on many of their fruits and vegetables (or the false claims that cucumbers from Almería caused an e. coli outbreak in Germany this past year), and Spaniards just wonder how I ended up there.

I have asked myself that question many times, and while “how I ended up there” I will leave for another hub, why I stayed is exactly what I would like to share. And I decided to put my reasons in numbered form, because if any of you travelers are like me, you have waited until the last minute to decide either where you are going, or what you are going to do when you get there. And everybody likes a good "10 Best” list. Or maybe that’s just me.

They say that Almería is where the sun spends the winter. At least in Europe, this may be true. Almería is the region – and yes, there is both a province and city (Almería, Almería) with that name – with the most hours of sunlight per year in Spain, and has one of the sunniest, warmest climates in Europe. The temperature in Almería is quite pleasant year round. Evidence? I was on the beach, in my bathing suit and sunburnt by February.

Tapas, if you aren’t yet familiar, are small portions of food usually served with a glass of wine or beer. They come from Spain, and while you can get almost any cuisine in tapa form now, the food is traditionally Spanish. Duh. However, in cities like Madrid or Barcelona, a tapa and the accompanying drink may set you back 5 to 10 Euros (for those of us who can’t convert Euros in our heads, Google does a lovely job with that). In the provinces of Granada and Almería, however, they give you a tapa complementarily with your drink. How civilized! Almería, in my biased opinion, has an advantage over the Granada system in that in almost any restaurant, you can choose which tapa you would like with your drink. In Granada, the tapas are chosen for you and come in rounds (ie round 1 is a plate of olives, round 2 is cheese, etc). The other wonderful part of Almería's tapas is that the price is so low. You can usually find a small glass (caña) of beer, or a glass of wine for 1.50 to 3 Euros, so eating out, even for poor students and language assistants, is perfectly doable.

3. Being poor while feeling rich

As an extension of the previous point, I must emphasize how easy it was to live on little money (especially by US standards). As a language assistant, I had prepared myself for poverty. I wouldn't travel, I wouldn't go out, and I would find as many ways as possibly to save a few Euros. When I arrived, I was pleasantly surprised about how little I paid for housing. While in Sevilla you might be spending 300 Euros a month on rent, it was perfectly doable, not living in squalor I might add, for less than 200 in Almería. Furthermore, groceries, restaurants and bars were also outrageously reasonable. The savings allowed me to travel every month I was living there. Hard life.

Living by the sea doesn’t always mean delicious, fresh seafood, although in Almería seafood and fish are plentiful, cheap and good quality. I managed to try everything from razor clams to octopus, and never had a bad experience. Beyond seafood, Almería province is also home to some of the highest quality olives and olive oil, not to mention the Serrano ham and oranges, in the country. All of which are rare to impossible to find in the US. Almería should definitely be part of any culinarily-inclined Andalucia tour.

All the Spanish coast, as soon as there is a twinkle of warmth in the air, is Mecca for European sun-seekers, a true melting pot of pasty Northern Europeans (and a few pasty language assistants). By the time the weather in Almería is warm enough by Spanish (and my own) standards, there isn’t but a patch of sand left. This was my experience both in Málaga and Alicante, along with a surprising amount of trash in the water in Málaga. The Almería beach, on the other hand, even in the city , had some room and no trash - just the occasional jellyfish.

6. Spanish travel off the beaten path

Given that most of Spain’s paths have been beaten to death, this is quite a hidden gem. Cabo de Gata Natural Park is a decent place to hike and offers some of the best beaches in the province of Almería. While public transportation is a bit bare-bones, if you can get there, there are plenty of ways to spend a day, a weekend or an entire summer. My days in the park were spent hiking or just relaxing on one of the beautiful beaches. Monsúl or Las Negras might have been my favorites.

My opinion not enough? The New York Times published an article about Almería’s beaches a few months back: “Spain’s Mediterranean Beaches Offer a Different Kind of Paradise”.

7.Spain off the beaten path II

Another cheap trip which was thoroughly worth the time was a night in a cabin in the Almeriense side of the Sierra Nevada. Split between friends, the lodging was cheap and cozy (if a bit rustic), we took a beautiful hike in the mountains, and made our meals in the house, grilling and making paella. It was February, so the almond trees were blossoming, and the weather was cool at night but still comfortable since we spent the evening in front of the crackling fire.

8.Granada is only 2 hours by train

If you have money and time, a day suffices to visit Granada, although you may not want to ever leave. Between the Alhambra, the beautiful rambling streets, and the vibrant young atmosphere of the university, Granada is easy to fall in love with. Order your tickets ahead of time to visit the Alhambra, and spend the rest of the day strolling along the winding streets, stopping to refuel on tapas and vino tinto. You can be back in Almería that same night.

9. Welcome to the Wild West (sort of)

That landscape from The Good, the Bad and the Ugly? Sorry to crush your romantic notions about the American Southwest, but that was all Almería. To be honest, there isn’t much left to see in Almería of this era except a campy Mini-Hollywood which sports an Old West town, saloon included, and cinematic paraphernalia. However, for movie buffs, it is worth mentioning. Beyond kitschy cinema history, the desert is interesting to see in itself, as it seems more moonscape than the typical tumbleweed-infested desert.

Lastly, Almería was actually an important city dating back to the 900s. The Alcazaba fortress is a beautiful Moorish structure built strategically to protect the city, and is the second largest of its kind after the Alhambra in Granada. But centuries before the Alcabaza was even in existence, there were other Neolithic and Paleolithic civilizations living in the Almería province. While the museum dedicated to this history is a bit, shall we say, lacking, the cave paintings scattered about the region, including the famous Indalo (the now symbol of Almería) must be pretty cool.

Beyond these 10 points, Almería is filled with small pueblos and deserted beaches just waiting to be explored. However, I should warn you about a few minor details which I would have liked to know before going.

There are a few minor negatives to life or travel in Almería. It is at the moment not very well connected, meaning that most flights make connections through Malaga, Madrid or Alicante, making Barcelona just as complicated of a journey as going to Paris. Also, the beaches in Cabo de Gata are poorly connected by public transport, so renting a car would be my suggestion if possible. Lastly, the version of Andalú spoken in the region is not the easiest to pick up at first. If you here something that sounds like “Eto qué e?”, you are actually hearing “Esto qué es?”.

Beyond these small setbacks, go, enjoy the climate, the food, the people, and to make it even better, you won't have to leave with an empty wallet.

And, if you're curious, Hello, Stranger is my abroad blog which highlights some of my musings on life as a foreigner. 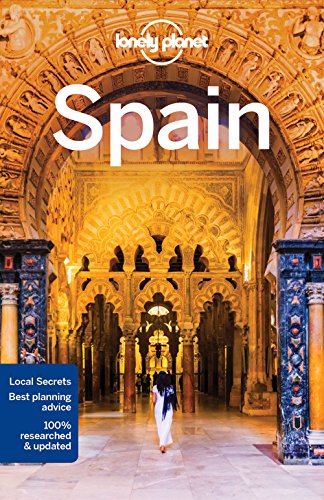