If you were America's least visited National Park, would you feel left out? Lonely? Would you long for more visitors, or would you enjoy the peace and solitude? For millennia, Isle Royale has stood far out in Lake Superior, enduring the pounding waves and brutal storms of our deepest Great Lake. Standing alone, in perfect natural solitude, it's an incredible destination point for those who want true wilderness surroundings.

The stunning beauty of the island is matched by it's history, and it's mystery. Ancient natives mined copper from Isle Royale, and Native American legends tell of fair-haired "marine men" or "sea people" who came to mine the copper 3000 years ago!

Since 1946 it's been a National Park. The least visited in the United States, and our only island national park.

Isle Royale remains isolated because the only way to get there is by boat or seaplane. There are no roads. No medical facilities. If you get injured or fall ill, you are basically on your own. It could be hours or days before you get help. (At your own expense). It's a vacation that requires research and preparation.

Depending on the time of year, you may be sharing your trip with mosquitoes, black flies, and bad weather. The island has many micro-climates. One minute you're on a sunny, rocky crest...enjoying magnificent scenery. The next, your trail becomes a muddy swamp that requires you to cover every inch of bare skin from the biting swarms of insects.

Boaters must be experienced. There are at least 25 shipwrecks surrounding this rocky island, the earliest recorded wrecks being the Madeline in 1839 and the Siskiwit in1840.

The weather on Lake Superior can change in an instant, presenting challenges and frustrations for hikers, but especially for those on the water. Kayakers and boaters need to be experienced, and anyone traveling by canoe is very strongly advised to stick to the inland lakes and channels.

There are 50 inland lakes on Isle Royale, and the island itself is surrounded by over 400 smaller islands. 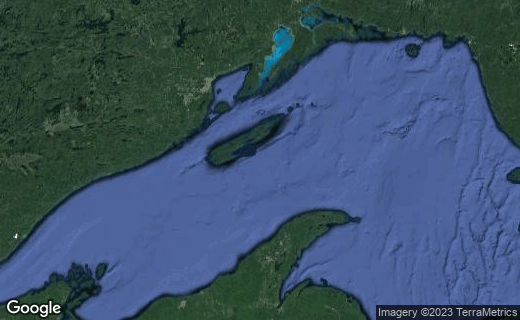 There is not a single deer on Isle Royale, but there are an estimated 1050 moose. They have only one predator to contend with. Wolves. In 1980 there were 48 wolves on the island. Today....there are 8.

Rolf Peterson and John Vucetich are currently the lead scientists for a wolf/moose study that has lasted for 56 years (the longest running study of it's kind anywhere in the world) exclusively on Isle Royale. The fascinating results of their work can be found here: http://www.isleroyalewolf.org/

The wolf/moose predator/prey relationship has a direct effect on the ecosystem of the entire island. Imagine an unchecked moose population on a confined island. In 1996 that population reached 2,500, only to collapse to an estimated 500 within 2 years due to a severe winter combined with an unexpected outbreak of ticks.

The National Park Service now has to make a decision. With the wolf numbers at less than a dozen, and the pack heavily inbred, extinction is a real possibility for Isle Royale's wolves. Do we let them go extinct? Do we introduce new wolves, and new genetic lines? This past April the Park Service decided NOT to introduce new wolves to the island....preferring a wait and see attitude. This is after 2 years of dragging it's feet on this issue. Scientists Peterson and Vucetich are quoted as being "disappointed" and plan a response to the NPS decision.

The severe winter 2014 allowed ice bridges to form on Lake Superior, and a radio-collared female left the island. She made it to the Minnesota shoreline where she was found dead. An autopsy revealed that she was shot in the chest.

Over 160 miles of hiking trails spread across Isle Royale. They cover a wide variety of terrain and offer stunning and scenic views that can only be fully appreciated in person. Pictures and video cannot convey the essence of this place.

Hiking to the Minong Mine via The Minong Trail is worth the effort. You pass prehistoric mining pits, where native Americans and mysterious visitors alike dug for Great Lakes copper. You walk into the caves where massive ingots of copper were dug by native, and possibly foreign miners.

It has been estimated that up to half a billion pounds of copper were mined in tens of thousands of pits on Isle Royale and the Keweenaw Peninsula of Michigan by ancient miners over a period of a thousand years. Purity studies on Bronze Age copper found in Europe match the purity of Michigan copper. That type of purity is not found in copper from the European continent. This mystery has yet to be explained.

One prehistoric mine on Isle Royale held a large copper boulder that sat on cut timbers that carbon date to 3000 years ago. One theory is that the Minoans made their way here and took copper back to Europe.

Other trails lead to much history involving mining, trapping, and commercial fishing. Some of these historic sites can only be accessed by boat, canoe or kayak. No matter how you travel on Isle Royale, there is a deep history that waits to be uncovered for those willing to look for it.

Off Limits In Winter

Isle Royale National Park is officially closed to all visitors from November 1 through April 15 annually. The area of closure extends 4.5 miles out into Lake Superior from the island. The park reopens April 16, 2015 with ferry service beginning the first week in May. Ferry service is available from various departure points.

Official information is always available from The National Park Service.

If you carry it in - You carry it out! Do not take anything from the island! Except pictures and great memories! Absolutely no pets. A visitors dog caused the outbreak of canine Parvovirus that killed many wolves in the early 1980s. In 2 short years the wolf population dropped from 50 to 14. Dogs are now prohibited from a radius of 50 miles from Isle Royale! No campfires permitted except in designated fire rings. Fuel stoves are permitted on the island, and it's the only practical way to cook. Most of these rules were put in place because of previous problems.

Today, our National Parks face dangers ranging from budget cuts to changing environmental conditions. These public treasures are some of the most beautiful places on Earth.

It should be common sense to preserve and protect this island paradise for future generations. We are only temporary stewards of this planet. It's the very least we can do. We owe them.

Had you ever heard of Isle Royale National Park before seeing this blog?