An Essential Guide to Singapore

JohnMello is a writer, composer, musician, and author of books for children and adults.

Singapore is one of the true melting pots of the world. Its tropical climate and near-constant temperature attract tourists and business people from across the globe all year round. In fact, almost half of the population at any one time comes from outside Singapore itself, and tourism continues to be a driving force in the country's economy.

Singapore's mascot is the Merlion, a mythical creature with the head of a lion and the body of a fish. The name combines "mer" (the sea) with "lion" harking back to Singapore's original Malay name Singapura, meaning "lion city."

Singlish, or Colloquial Singaporean English, is a construction of parts of several languages designed for ease of communication between divergent cultures. Here's an example of how Singlish might work in practice:

Singapore's native languages include Chinese, English, Malay, and Tamil. English is spoken in most places, while Singaporeans have their own version of English known as Singlish.

Singlish is a pidgin language made up of parts of many other languages, developed possibly as a means of communication between different cultures. This colloquial form of expression has traditionally been linked with the lower classes, and its usage is dying out partly due to government attempts to discourage it.

The City State of Singapore 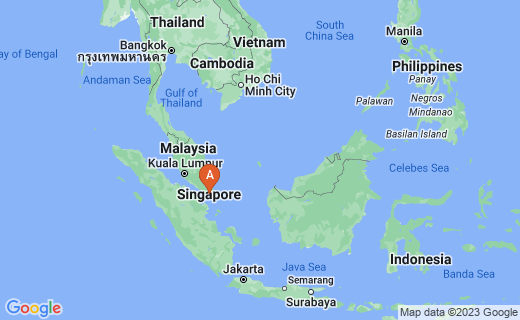 Why do people flock to Singapore year after year? The country is a fascinating blend of old and new, offering a taste of Asia in a contemporary setting. Giant steel and glass buildings dominate the skyline while their ancient cousins nestle inconspicuously below, all but obliterated in the race to modernize.

Singapore is renowned as being one of the easiest places in the world to do business. Shopping centres abound on the tiny island, and yet it's still possible to experience the diverse cultures that combine to create this southeast-Asian gem.

If you like shopping, you'll love Singapore. Catch a bus to Orchard Road, packed with shopping malls spread over multiple levels, where you can spend as little or as much as you want. Or plan a trip into Little India to visit the Mustafa Centre. Open 24 hours a day, this massive complex is the place to go for almost every item you can think of, from tissues to toaster ovens and everything in between. Pop down to the basement level to check out their vast range of appliances. Every one gets plugged in and checked before customers complete their purchases.

Keep your eyes open for shop houses which can be seen dotted about the city. These typically contain a shop on the ground floor opening out onto the street with accommodation above, and can be found in the various cultural districts as well as along the river in the guise of tea houses, theatres and budget hotels.

The currency used in Singapore is the Singapore Dollar (SGD). Though exchange rates vary, at the time of writing one Singapore dollar was equivalent to roughly 2 British pounds, 0.62 Euros and 0.81 US dollars.

If you ever get tired of shopping, there are plenty of other things to do. Whether you're after cultural enhancement, wining and dining or exploring the diverse indigenous population, there's something for everyone in Singapore.

Although Singapore is a city, country and island all in one, it covers only 710 square kilometers. That makes it roughly 3.5 times the size of Washington D.C. Being so compact makes it easy to get around, especially if you take advantage of the efficient public transport system.

Wherever you are on the island, you're likely to be near a bus stop. Buses run frequently to all the major centres and prices are reasonable. Buy an ez-link card for 10 Singapore dollars to avoid the need for change. The card can be topped up in 7-11 stores and used on the Mass Rapid Transit (MRT) train lines, the fastest way to tour Singapore on the cheap. If you're in even more of a hurry you can text for a taxi. Taxi fares vary according to company and distance, the least expensive option being to travel in a group.

A temperature that floats around 25-30 degrees Celsius all year round makes Singapore the perfect place for evenings out. Wherever you go, sidewalk cafes, bars, and restaurants are found in abundance. Here are a few of the top areas you should try to visit:

Traveling with children? Here are a few additional activities that will keep everyone occupied, no matter what their age:

Singapore Zoo - occupying 69 acres on the margins of the Upper Seletar Reservoir, the zoo boasts about 315 species of animal, attracting 1.6 million visitors each year. It houses the largest captive colony of orangutans in the world, and its location has earned it the nickname The World's Best Rainforest Zoo.

Singapore Night Safari - the world's first nocturnal zoo and one of the most popular tourist attractions in Singapore, this open-air zoo set in a humid tropical forest is only open at night.

Universal Studios Singapore - theme park located within Resorts World Sentosa on Sentosa Island, Singapore, the only one of its kind in Asia.

The Singapore Flyer - located near the shore of Singapore's Marina Bay, the flyer is a giant Ferris wheel that's 30m taller than the London Eye.

Singapore has its own international airport called Changi International Airport. A taxi ride into the city will cost between 20 and 40 Singapore dollars and should take about half an hour. Ask the taxi driver for a fixed price before you set off.

Changi Airport was the seventh busiest international airport in the world in 2011. As airports go, it's delightful. Three terminals cater for your every need, with rooftop bars and terraces, and a butterfly garden in Terminal 3. Residents can even pay for their TV licenses at the Post Office kiosk.

The Changi Airport Skytrain operates between Terminals 1, 2 and 3, with separate cars for air-side (transit) and land-side (public) passengers. The service is free of charge and makes getting around the airport much easier.