• Origin of the State Name: Arizona traces the origin of its state name to two different Indian languages:

• State Flag: the top half of the flag portrays 13 rays of red and gold representing the original 13 states of the union, the lower half is blue representing liberty and the star at the center is copper representing the copper mining industry in the state.

• Border States: Arizona is bordered by the state of Utah to the north, Colorado to the northeast, New Mexico to the east, California to the west and Nevada to the northwest.

• There are 26 mountain peaks in Arizona higher than 10,000 feet in elevation.

• Arizona produces enough cotton each year to make more than one pair of jeans for every person in the United States.

• Arizona is one of the Four Corners states, meeting New Mexico, Colorado and Utah in a quadripoint, the only such point in the nation.

• The two largest manmade lakes in the United States, Lake Mead and Lake Powell, are both in Arizona. 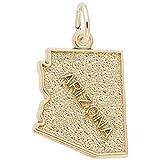 The Hopi, today a federally recognized tribe of Native American people, have lived in northern Arizona for thousands of years. They still practice many of the ancient ceremonies and traditions of their ancestors.

These four young women were in the midst of a corn grinding ritual, one of the initial phases of an elaborate marriage ceremony. During this phase, they would grind grain for four days – to prove their abilities to do so. Once finished with this ordeal, a much longer marriage ceremony would ensue. Their elaborate squash blossom or butterfly whorl hairstyles indicate that they are unmarried but marriageable.

Opened in 1905, the El Tovar Hotel is located on the South Rim of the Grand Canyon and is still used today. Built from local limestone and Oregon pine, its architecture is part rustic Western lodge and part Swiss chalet, with a touch of Mission style. Several United States presidents and numerous celebrities have spent the night in this historic hotel.

"I Didn't Know That!" - Some of Arizona's Little Known Facts

The 1881 legendary gunfight at the O.K. Corral in Tombstone, considered to be the most famous gunfight in the history of the Old West, only lasted 30 seconds!

● Arizona has some towns with amusing names:

● Oraibi (also called Old Oraibi) is one of the oldest Native American communities in the United States. Founded before the year 1100 AD by the Hopi, this village is located in the northeastern part of Arizona and is still occupied.

● The Petrified Forest National Park, in northeastern Arizona, is home to the largest bed of petrified wood in the United States.

● Arizona was the first state to declare an official state neckwear - the bola tie.

● The planet, Pluto, was discovered in 1930 by astronomer, Clyde Tombaugh, while working at the Lowell Observatory in Flagstaff.

● The saguaro cactus is an icon of the Arizona desert. The Saguaro National Park protects many of these majestic plants which: 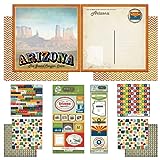 Interesting Places to Visit When in Arizona

The age of the Grand Canyon is the subject of much debate amongst geologists. The newest evidence, however, suggests that the Colorado River began its current course through the canyon at least 17 million years ago!

► The Grand Canyon, being one of the Seven Natural Wonders of the World, is a must see! Perhaps President Theodore Roosevelt best describes its beauty when he said,

“The Grand Canyon fills me with awe. It is beyond comparison – beyond description, absolutely unparalleled throughout the wide world . . . “

Divided into the North and South Rims, the Grand Canyon is 277 miles long and over a mile deep, carved by the Colorado River into an enormous and amazing natural sculpture.

► The Phoenix museum’s name, Hall of Flame, isn’t at first self-explanatory . . . but once you realize that it is a showcase for antique fire engines, some centuries old, it makes more sense. The National Historical Fire Foundation, the museum’s full name, opened in 1961 and contains retired firefighting equipment from around the world.

► There is a real London Bridge in Arizona! London’s original 600 year old bridge was replaced by a second bridge, finished in 1831. However, this “new” bridge soon developed stability issues and another new bridge was needed once again. It was decided that this second bridge should be sold. In 1968, Robert McCulloch, an American, bought the bridge for $2,460,000 and had it transported to its current location at Lake Havasu.

► Meteor Crater, formerly known as the Canyon Diablo Crater and still called Barringer Crater by some, is located near Flagstaff. The crater was created 50,000 years ago when a meteor struck the earth at approximately 28,000 miles per hour, producing a hole in the ground 550 feet deep. It is said to be the best preserved impact site of a meteor on earth. Interestingly enough, scientists believed for years that the hole had been created by volcanic activity.

There are thirteen different species of rattlesnakes in Arizona, more than in any other state!

► Arizona’s desert landscape is unique from all other states. Its plants and animals live in a harsh environment not found anywhere else in the country. For those wanting to learn more about the habitats found in Arizona, there is the world renown Arizona-Sonora Desert Museum in Tucson. An amazing combination of zoo, botanical garden, art gallery, natural history museum and aquarium, it is home to 1,200 varieties of plants and more than 230 animal species with every effort made to create exhibits representing their natural habitats.

► Antelope Canyon is a slot canyon located on Navajo land near Page. It is divided into two sections, Upper and Lower. Both sections are famous for their amazing sandstone formations created by years of flash floods gouging their way into the earth. The Canyon's incredible color and lighting has long been an attraction for both sightseers and photographers.

Where to Find Those Interesting Places in Arizona 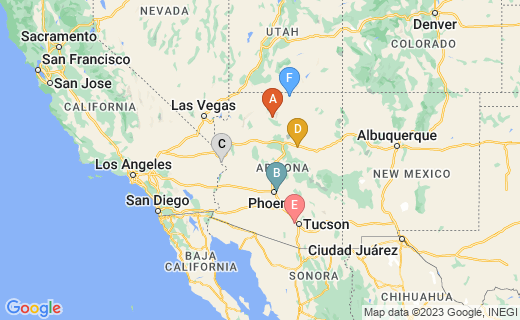 B
Hall of Flame - Phoenix, AZ:

• You've been burned in the summer by your car handle, seatbelt buckle, and/or steering wheel . . . and you know you should NEVER pick up loose change on your dashboard.

• You know that the best parking spaces are the shady ones . . . no matter how far they are from the door.

• Bridges and “rivers” are not associated with water . . . until Monsoon Season.

• You are well aware that asphalt has a liquid state.

• You don't even own an umbrella.

Check out these Arizona Hubs by other Hubbers!

If you can add to or correct anything you have just read, please let me know!