Around Newquay Harbour there are more things to see and do than you first imagine. A working harbour, Newquay Harbour is also home to a fab seafood restaurant, the local gig rowing club, many sea fishing trip booking offices, a live Newquay Harbour webcam and the famous Newquay Seals.

As part of a walk around Newquay, when the tide's out, you can even stop off at the Harbour for some relaxation before taking the steps down onto Towan Beach and exploring more of the beaches of Newquay.

You can access Newquay Harbour from three directions and routes:

Newquay Harbour might look quiet and as if nothing much goes on, but take a closer look around.

You'll see piles of crab pots stacked high - the fishermen lay these crab pots out on the Ocean floor, then collect them a few days later.  The trapped crabs are then landed at the quayside and straight into a freezer container lorry that whisks them immediately across the channel to Europe.

On the beach itself, well, about 3' above the sand, you'll find the New Harbour Seafood Restaurant. In the summer months they additionally have an outdoor BarBQ. You can sit inside, or outside on the patio - protected by marquee sheeting when the weather's not too good.

Along Newquay harbour wall, you'll see a group of small wooden huts where you can choose between exciting and varied sea trips.  There's shark fishing, mackeral fishing, or even speedboat trips round the Bay.

Find out what's on offer and make a booking on the spot.

Newquay's quite well known for the Newqual Harbour Seals, they even have their own website. As the fishing boats come into harbour each day, the seals will follow them in and wait for scraps to be thrown from the boats.

I've seen up to three at a time swimming around and tussling with each other. There are lots of photo opportunities to snap the seals, if you're at the harbour at the right time. Be careful though - don't be tempted to enter the water and stroke them as they might look cute but they are still wild animals and might feel threatened by you!

Newquay Gig Rowing Club has a clubhouse and gig boat store at Newquay Harbour. The club is well established, with a selection of boats, some of which are over 100 years old.

Regular rowing sessions are held throughout the summer months - and in early September the County Gig Championships are held at Newquay Harbour - when you'll see gigs from teams around Cornwall.

A Pilot Gig boat is made of wood and has six rowers and a cox. They were traditionally used to guide ships safely into the harbour. When a ship appeared on the horizon, wanting safe passage, gig boats would race out to them - and the first one to get a Pilot on board the waiting ship would win the business and be paid to guide the ship in safely.

Gig racing is a great past-time - and at times you can even have a go yourself during trial nights held in the summer.

Newquay Rowing Club has a great position, with an outside balcony overlooking the whole bay. Serving alcoholic and soft drinks and some hot food, it can be a great way to spend a few hours on a hot day. You can walk in and get temporary membership at the bar for just a couple of quid - you'll make that back on your first round as the drinks are super-cheap.

The RNLI Lifeboat Station in Newquay is on the harbour. When there's a shout out the doors will rise and the boat will be pulled across the road and down the slipway, launching from Newquay Harbour beach. If you're in a car in Newquay Harbour, don't be tempted to park where it says you can't - in case the lifeboat launches and your car's in the way!

When it's open, you can look around the lifeboat house and see the lifeboat up close. There's also a log kept and on open view that lists all the recent RNLI launches from Newquay lifeboat station. 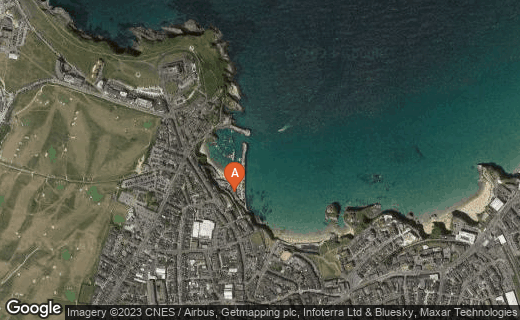 Newquay Harbour Webcam is to be found on the Harbour Hotel, above the harbour at the top of the steps - if you love this view, then why not enjoy it for real with a proper Cream Tea on the Harbour Hotel outdoor balcony and patio area, where you'll enjoy this exact, same view in the flesh!

It's a fab Newquay webcam because it's streaming so fast, it's in real-time.

You can watch if there's a lifeboat launch, or see the Newquay gig rowers going out to practice, or even to race.  You might even spot a Newquay seal!

This is probably my favourite Newquay webcam, because it's so fast and so clear.

There's limited pay and display public car parking down at the Harbour, except when there are events on. If it's a big day, like the RNLI Lifeboat Day, or the County Gig Championships, or the Newquay Fish Festival, then the whole area is closed off to public car parking.

There are good public lavatories at Newquay Harbour, between the Harbourmaster's office and the Shacks selling boat trips.

If you want to launch a craft from Newquay Harbour, you'll need to contact the Harbourmaster. The Harbourmaster's office is on the quayside, or you can phone 01637 872809.

Newquay Harbour is a working harbour. Fish and shellfish are landed daily on the harbour. Notice there is a gate which is sometimes open and sometimes shut - there's a sign on there saying that dogs are banned from the harbourside because of food hygiene reasons.

Although there's been a small quay at Newquay since at least before the 1400s, the current Quay and Harbour didn't start to appear until 1831 when Richard Lomax invested £10,000 to improve the harbour in order to make the area (and him) more prosperous. Having made the decision and got the work underway, he died before it was completed. The executors of his estate decided it was better to complete the work before selling his estate of the manor house and the harbour.

The next owner was Joseph Treffry, who bought the manor and harbour for £7,000. His vision was to extend the Harbour and build a North Quay.

Things to Look Out for on Newquay Harbour: