Atalaya, a national historic landmark, is tucked behind the sand dunes of Huntington Beach State Park, overlooking the Atlantic Ocean in South Carolina. The "summer home" of Anna and Archie Huntington in the 1930s, it would surely be one for the "Homes of the Rich and Famous" if it were occupied today.

The land that is now Huntington Beach State Park was once a rice plantation known as Waccamaw Neck. Malaria and hurricanes made living there very hard for both planters and their slaves. For that reason, the families of the planters often lived away from the plantations from March until October, or in summer homes built among the dunes, where mosquito populations were less threatening. Theaville, near where Atalaya stands, was one of the dune settlements. Of course, the dunes were not a good place to be when a hurricane hit the coast. Whole families were sometimes lost to these storms. Life was not easy, but the money gained from rice production could not be ignored.

But when the Civil War ended slavery agriculture was no longer profitable in the area. A new business took its place, hunting waterfowl. The rich from the north were lured to the South Carolina coast for the sport. They built hunt clubs and mansions, and restored the old rice fields to attract more birds. It was some of this hunting club land that attracted the Huntingtons.

Anna Vaughn Hyatt, married to Archie Milton Huntington, was an accomplished sculptress. They purchased the land, then called Brookgreen, in 1930. The Huntingtons planned for the land to be a natural preserve and a studio of Mrs. Huntington's work. They lived in the clubhouse in the early days, as they built Brookgreen Gardens. They enjoyed horseback riding and socializing with their neighbors. Mrs. Huntington worked on her art.

It was planned from the beginning to build a new home, one that had more amenities and would be more comfortable in winter. Mr. Huntington was a Hispanic scholar. He used his knowledge of Spanish architecture when he designed Atalaya. It is built around a courtyard, much like the style of the Spanish Mediterranean coast. Apparently the blueprints were in his mind. It is said he dictated them orally to the contractor. The major construction was completed in 1932. In the center of the courtyard was built a tower. The mansion gets its name, Atalaya, from a Spanish translation meaning watchtower. The courtyard is beautifully landscaped, with palm trees lining the bricked paths. The estate looks like a fortress. In the spring wisteria blooms and cascades over the archways that lead from the courtyard to the house.

Over fifty rooms were built into the four sides of the courtyard. Atalaya had an indoor and an outdoor studio. Mrs. Huntington had pens built to contain animals she used as models for her sculptures including stables for horses, dog pens, and a bear pen. The building housed living quarters, servants' quarters, a library, offices, laundry rooms, kitchen, pantries, rooms for clothes storage, an oyster shucking room, walk-in icebox, several bathrooms, and other utilitarian rooms.

The couple had to cease visiting Atalaya when World War II began. The United States Air Corp from the Myrtle Beach Air Corp used the building and grounds for patrolling the beaches. Atalaya housed personnel and a radar unit. After the war ended the Huntingtons returned a few more times, but made their last trip in 1947. Mrs. Huntington was known worldwide for her art, and worked until she was in her nineties.

Plan a Trip to Atalaya

Park guides give a through narrative of the history of the building and the Huntingtons. When I visited my guide gleefully told us that Atalaya was once used for a Girl Scout Camp, but soon stories that it was haunted made the children to fearful to sleep in the dungeon-like rooms. Knowing young girls like I do, I can only imagine the sleepless nights and tall tales that abounded during those camps. The park has evening ghost tours for one of their activities. I have to imagine that listening to ghost tales in the shadows of Atalaya's walls would be very effectively spooky.

An arts and crafts show is held at Atalaya every September. The grounds can also be rented for weddings, although the waiting list for a reservation is at least one year.

Huntington Beach State Park covers 2,500 acres that include ocean front beach, marshland, and maritime forest where a large number of creatures make their homes. The park offers some of the best birding in the state, and a fresh water lake is home to alligators, which can be observed from a causeway observation deck. The park also offers camping, picnicking, swimming, nature trails for hiking, fishing and crabbing. There is a well-stocked park store and gift shop. The park is located three miles south of Murrells Inlet on US Hwy 17 across from Brookgreen Gardens. It is a short trip from Myrtle Beach, Hampton Plantation State Historic Site, and Pawleys Island. The park is open year around and charges a small admission fee. Visit www.southcarolinaparks.com or call 843-237-4440 for more information. 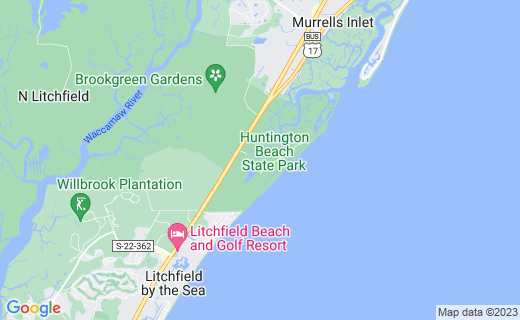