Bali - Morning of The World

Bali, an island as well as province of Indonesia has always been known for its supreme natural beauty. It is one of the most popular tourists destination due to its scenic beauty and welcoming locals. Bali is also highly renowned for its developed arts, which includes modern and traditional dances, painting, sculpture, metalworking, music and leather. In addition to its rich culture, Bali also hosts the International Film Festival every year. Bali is also part of the Coral Triangle. Coral triangle is the area which has the largest biodiversity of marine species.

The majority of population in Bali is of Balinese Hindus, making more than 83% of the population. The minorities include Muslims, Christians and Buddhists. Apart from the Balinese Hindus majority, Bali also has Chinese immigrants. Their traditions have mixed with that of locals. The original religion of Sino-Balinese is an amalgamation of Buddhism, Christianity, Confucianism and Taoism. But it has mixed in with local traditions as well. So you will often find the local Sino-Balinese during the local temple’s Odalan. Also, when a Sino-Balinese dies, Hindu and Chinese priests perform rites side by side.

Bali is big on celebrations. Events like Odalan (temple festival) or tooth-filling (coming-of-age ritual) are well known as Balinese traditions. Most of the celebrations and events in Bali are celebrated in a very loud and boisterous manner, with a lot going on all at once. The aesthetic created is known as ramé and is distinctively Balinese.

Nyepi is the Hindu New Year and it is celebrated by a day of silence in the spring. Everyone stays at home on this and even the tourists are encouraged to stay indoors. However, on the day before New Year, there are huge and colorful sculptures of ogoh-ogoh monsters that are paraded through the streets. At night these monsters are burned to drive away evil spirits. Bali celebrates many more festival, according to the Balinese calendrical system of pawukon.

Bali is well known for its diverse and advanced art forms, such as sculpture, painting, handcrafts, woodcarving and performing arts. Dances are an integral part of Balinese life and entire villages take part in these performances. Bali dances are also quite famous, the different styles of dance are Legong, Pendet, Topeng, Baris, Kecak (the monkey dance), Gong Keybar and Barong dance. The percussion orchestra music of Bali, known as gamelan which is highly developed and varied.

The Ramayana dance is a popular dance, which portrays the themes of love, war and death. But the Ramayana has heavy Balinese influences. The dance of Barong is another classic about good conquering over evil, as the lion Barong defeats the evil Rangda. This dance is accompanied by the gong keybar. Performers from Bali are well paid to perform at thousands of festivals, temples, private shows and public events.

Bali has a distinctive cuisine, with influences from indigenous traditions as well as Chinese and Indian. Balinese cuisine uses a diverse range of spices, mixed with fresh vegetables, fish and meat. One of the popular dishes from Bali is Sate Lilit. It can be made from chicken, fish, pork, minced beef or even turtle meat. It is then mixed with coconut milk, coconut and an incredible variety of spices and vegetables. It is served wrapped around a bamboo. Another traditional dish is Lawar, made of vegetables and meat dish served with rice.

Bali has always been a popular tourist spot. Its natural beauty with an atmosphere of peace, along with its welcoming natives and high quality services and amenities are some of major reasons why tourism is the highest earning industry in Bali. The hotels and restaurant staff have been trained to serve all guests with the standard of a five star.

The visitors are usually offered strings of flowers to wear around their necks by workers at hotels. Bali has a range of incredible spots to offer. Whether it’s the gorgeous beaches with the stretch of fine white sand diving with the tropical creatures along the coral ridge or the intriguing wreck of a WWII, Bali has it all. The jungle shelter the stone temples and mischievous monkeys who live there.

Ubud is the artistic capital of Bali and has amazing cultural dance performances as well as other exciting activities, like workshops for silver smiths and yoga class. The Ubud Monkey Forest is a temple complex with monkeys that is quite popular with tourists. The Puri Lukisan Museum has some of the best works of Balinese artists. There is also a Bali safari and marine park and Goa Gajah, a cave that is famous for its artistic ancient carvings.

Some amazing facts about Bali!

Opened in 2011, this is the world’s largest bamboo building. It is located not far from Ubud and offers tours to visitors, along with a variety of delicious chocolate products.

3. Kopi Luwak – the most expensive coffee

Make from civet droppings, Kopi Luwak is considered to be one of the most expensive coffees in the world. It can cost as much as $50 per cup! It is not indigenous to Bali but it’s one of the best places that offer authentic Kopi Luwak.

The North tip of Bali, Lovina, has plenty of dolphins! The types of dolphins include the Risso’s dolphins, the Fraser’s dolphin, the Spotted dolphin and the South East Asian spinner dolphin

Here are a few links to help get you inspired for your next adventure in Bali! 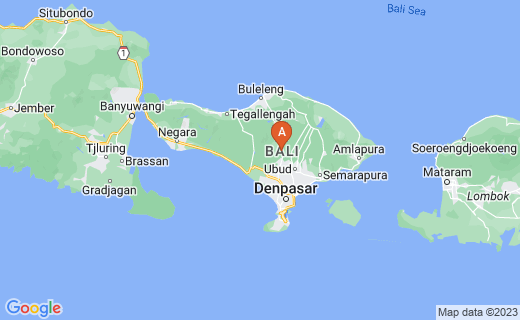 Bali is an island and province of Indonesia.