The Baiyoke Tower II, in Bangkok's Ratchathewi district, is currently the tallest building in Thailand at a height of 304 metres, or 328 metres including the antenna.

The building is actually a hotel; The Baiyoke Sky Hotel with 673 rooms and a shopping mall beneath where cheap clothes are sold in bulk.

Curious visitors are allowed to go to the top of the building for a fabulous view of Bangkok, tickets are 220 baht and are sold in a kiosk just to the left of the hotel's main entrance. Visitors can climb the stairs if they wish (in fact there is an annual race up the stairs) but most will opt for the lift. There is one lift which goes up the outside of the building to the 83rd floor; it has glass sides so it is not for those who can't deal with heights but there are also internal lifts for those who don't want to be in a glass box on the side of the building!.

The View From The Top Of Thailand's Tallest Building

There are observation decks on the 77th and 84th floors of the Baiyoke Tower II affording excellent views across the city of Bangkok.

The observation deck on the 77th floor is enclosed and this means you can get right up to the edge of the building with just a piece of glass between you and a very long drop; it is quite disturbing if, like me, you don't deal too well with heights.

The observation deck on the 84th floor is in the open air and you are behind a fence and a few feet away from the edge which has a wall around it; I guess this is to prevent "jumpers". Even the thought of falling from this height made me feel quite unwell! The 84th floor has a revolving floor!

On the 83rd floor is a bar and here you can redeem your ticket for a free drink. All the walls are of glass so you still get great views of Bangkok, from the tallest building, whilst you enjoy a drink.

The views from all the observation areas are great and even after living in Bangkok for years I learned a lot about the city's layout. It all looked so small and I was able to pick out all of the city's landmarks and it gave me a new perspective on areas that I know.

It might surprise people to learn that Bangkok is not a particularly smoggy city. Well, it might not compare too well to many small, clean European cities but when compared with the likes of Jakarta, Delhi, Seoul or many cities in China the level of smog is pretty low and it rarely spoils the view much. In the months of February to April the levels of visibility will be most reduced due to dry weather and dust. After rain showers you get the best visibility and my visit was made in July, in the middle of the rainy season. I wouldn't want to be at the top of the Baiyoke Tower in a thunder storm though!

The View From Baiyoke Tower II At Night

The view from the top floor of the Baiyoke Tower at night is quite beautiful with the lights of busy Bangkok spreading out around on all sides. The top of the tower itself is lit up with disco-like lights which flash right behind you as you stand on the open-air observation deck, but it is the lights of the Bangkok traffic on the roads below and the surrounding buildings which are magnificent.

The lights at night make it easy to pick out many of the features of Bangkok including many of the 4 and 5 star hotels, major road junctions, Victory Monument, the Ananda Samakorn Throne Hall and even a distant Wat Arun on the bank of the Chao Phraya river.

In the dark it is particularly nice to sit in the candlelit bar on the 83rd floor and view Bangkok's lights and try to pick out where you have been, where you will go and just enjoy the view, while you enjoy a drink and the inevitable elevator-style music.

You can enjoy the view from the top of the Baiyoke Tower II in the light and dark if you arrive at around 5pm and wait for dark at around 7pm. If you go to the top early in the afternoon, don't give your ticket in at the bar and you can use it again later to revisit in the dark.

Have You Visited? What Did You Think?

Have you been up the Baiyoke II Tower?

This is great little book which has a series of top ten things to see and do, in Bangkok, for a variety of categories such as attractions, things to eat, temples, shopping locations etc.

This book is small enough to fit in your pocket and gets straight to the point, showing you want you really want to see, succinctly, making it easy to pick out the things that interest you from all the other stuff. Much better than the unwieldy Lonely Planet guides with their utterly bizarre transcriptions of Thai script that only the authors understand.

I have used these Top Ten guides for Bangkok, Seoul & Paris and they really helped me find things that I was interested in. 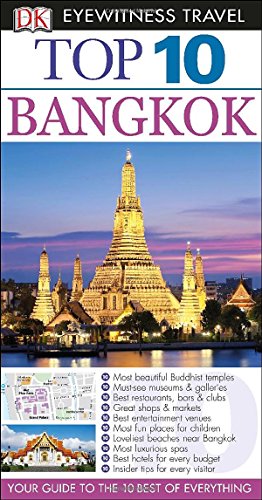