I started out my day having my daughter drive me around, taking pictures at a cemetery for another Hub.  I really like visiting older cemeteries and making up stories in my head of how people lived and died.  I ended up looking around at the wonderful city of Battle Creek, Michigan thinking “Hey, this town is a great place for those looking to take a vacation”.  So for benefit of you readers, I have taken pictures of Battle Creek and will give you little tidbits of information.

It's amazing what one will find when out taking pictures of something else.  You just might find your own vacation spot right next door!

The sites of Battle Creek, Mi

Sojourner Truth to welcome you!

As you enter Battle Creek from M-66 there is a lovely welcome sign, welcoming you to the town. Don’t go to far because just ahead on the right you will find a tribute to Sojourner Truth, who passed away in Battle Creek. She happens to be a Hero to many, but particularly to the people of Battle Creek, because she chose this as her final resting place.

I never did find her ‘actual’ headstone but I did find the memorial that was erected in her honor. A fellow hubber, mythbuster wrote an awesome article on the life of Sojourner Truth and I won’t even attempt to follow in his footsteps. Suffice it to say that I was able to get some pictures that he wasn’t able to.

From there I went by the Kelloggs cereal factory. Tony the Tiger and Tony Jr. are still watching vigil over the city as they stand in front of the factory. Turning around I went back to Post cereal which is only a block or so away.

The Post factory still has a visitors entrance and I managed to get a photo of the old Post hose which is still functioning, and huge. It seems as though they started one section then continued to build on it for years, this picture is just a small portion of this house. In order to help out it’s workers Post built houses in an area which they named Post addition built in 1904. Not many of the workers live in this neighborhood, but it is still alive and well.

From there I visited the Castle, yes Battle Creek, Mi boasts an actual castle.  It is called Pennimen Castle, and its history can be found on the historical Castles website.  A few years ago I met the owner of this Castle, he told me a little bit about it.  At this point it has been divided into apartments with renters living in it.  In 1941 there was a fire that destroyed the top floor and it was never re-built.  There is a piano that is inside the castle that can never be removed unless it is in pieces.  I was invited at the time to tour the Castle and I could not find the time much to my regret, since he current owners do not offer tours, sad to say.

The Castle sits on the corner of Main St. and Kingman, they are used to people passing by and stopping to take pictures.  The current residents have decorated it for Halloween.  From the Castle we zipped by the old Train Depot, it has some very nice brick work.  It no longer is used for trains but does not sit empty, it is now used for the Community Action Agency and is kept quite lovely.

A Lovely place to stay

From there we traveled by the McCamly Plaza Hotel, which is an extremely nice hotel which over looks the city from it’s height and is within walking distance of the many places to view. On the main floor of the plaza you will find shops and restaurants to eat at. Attached to the McCamly Plaza Hotel is the Kellogg Arena which host many concerts, circuses, car shows, Monster truck shows, wrestling and just about anything you can imagine seeing, they have it there. It seems when passing by there are all sorts of tour buses with celebrities performing.

Directly across the street from this hotel is Full Blast, an indoor water park, work out room with gym and basketball court for those so inclined. During the summer it is also an outdoor water park, children are asked to be supervised by parents. So please do not drop off your children with the hopes of having an all day babysitter.

In town and out of town

In the downtown area there is plenty to see, the cobblestone bricks are still in place and repaired often to keep as much as the original look to the city. In the winter there are ’The Festival of Lights’ the whole town participates in this. Bring your thermos of hot chocolate as you walk along the walkway for several city blocks viewing the many different light displays.

In the summer there is the air show in July at the airport with the Balloon festival. The sky comes alive with balloons from all over, with various races during the week. There are plenty of people who offer rides to those who are willing to view the city by air. Seeing the different shapes and sizes of the hot air balloons floating through the air is a sight to behold.

You will find ’The Comedy Club’ theatre, with many comedians who find their way into this town. The name of the Comedy Club used to be Gary Fields Comedy Club, but he moved to the downtown area. The address is 51 Michigan Ave. for those who may be looking for a fun night out.

If your looking for a Micro brewery try the Arcadia, it seems to be a hot spot with plenty of night life action. If you feel like stopping in at ‘Claire’s on the River’ you will get a wonderful meal along with a little history, Claire’s used to be a depot.

Yet more to see

In order to be fair I also snapped a picture of The Ralston Food company.  To complete my story I had to get a picture of the Federal Center.  I have been inside the Federal Center, before 9-11-2001, it is magnificent in its intricate leather work.  In the foyer which spans 2 floors, if you look up you will see the ceiling which is leather in it’s entirety.  At some point I may get brave enough to ask if I can get some pictures.  It is a sight that one would never forget.

It started out beginning as a Sanatorium for those who were very ill, some say it is haunted.  This was the beginning of the cereal boom.  Well, the idea behind the cereal boom.  Mr. Kellogg and Mr. Post decided to collaborate together and create something ’good for you’ to eat in the mornings.  They ended up parting of the ways.

As we continued on our travels we passed by the Leila Arboretum, which is also home to the Kingman Museum.   The batteries in my camera died at this point, and I had forgotten  had an extra set of slightly useable batteries in my purse.  The trails for walking are clearly marked and in the winter sledders are more than welcome to skid down the hills.  The wind whipping in your face with the snow burning your cheeks only makes you want to run back to the top and do it all again!

As we were heading back home (it is late September at the time of this writing and is starting to get chilly) I found those batteries and had to take one last picture!  We call it “The Jetson House”.  About 10 years ago it went up for sale and just for fun we decided to look at it.  The house faces about 5 acres of semi-wooded lawn, it’s the house that has the appeal.  It has an elevator to go from the garage (under the house)  to the top floor!  When peeking through the windows we seen why we termed it “The Jetson House”, from the cartoon.  I expected Rosie to pop out from one of the cupboards.  It was built in the late 1950’s early 60’s and is still what one would term very modern, with all sorts of built in things in the kitchen.

It was either the tornado that passed thru the yard 5 years ago, or word got around about it being the ’Jetson house’ because they now have ’No Trespassing’ signs  and ‘No Entry’ with ‘Do Not Disturb’ marking all over the property and the drive. 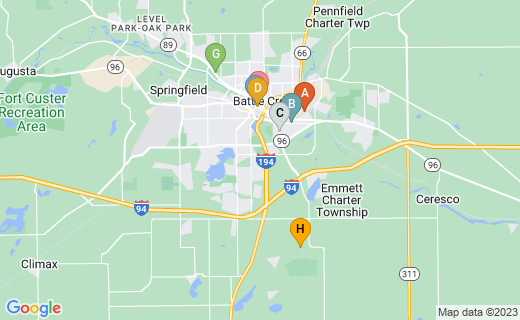 Just taking photos of the town reminded me what a great place it is to visit as well as live,  I used to live there 8 years ago, and now I was looking at it with ‘new’ eyes.  These are just a few things to see in Battle Creek, if you happen to stop by make sure to take time to visit the Binder Park Zoo as well.  In October they have the ‘Zoo Boo’, so make sure you show up in costume!

So if by chance your traveling on I-94 through the beautiful State of Michigan go North on M-66 and take a tour of the lovely town of Battle Creek!  Plan a day or two so you have the opportunity to see all the sites that Battle Creek has to offer!