Hawaii, America's Pacific Island State was, an kingdom until it became a part of the United States.

King David Kalākaua who reigned from February 12, 1874 to his death on January 20, 1891, was Hawaii's last King. Being childless, he was succeeded by his sister, Lydia Kamakaʻeha Kaola Maliʻi Liliʻuokalan.

Queen Liliʻuokalani was Hawaii's only female monarch and her reign was short as she was ousted in 1893 when Hawaii became a republic.

As one travels around Hawaii, especially the Big Island of Hawaii, there are many reminders of the state's royal past.

One of these reminders of Hawaii's royal past is King David Kalākaua's Beach Cottage which can be found nestled in a picturesque little garden between Kahaluu Beach Park and the Keauhou Beach Resort.

King David Kalākaua's cottage cannot be seen from the road and there is no sign indicating its location.

However, it can be easily found as one drives along State Highway 11 just south of Kona, on the Big Island of Hawaii. All you have to do is look for Kahaluu Beach Park and pull into its parking lot.

There is no fee to enter or park your car at the Kahaluu Beach Park.

The park itself is a public beach which is frequented by picnickers, swimmers, surfers and green sea turtles.

Adjoining the park is the Keauhou Beach Resort and sandwiched between the park and beach is a beautiful park like area with tropical flowers and trees, a pond and a nice little cottage.

According to a nearby plaque the cottage is known as Ka Hale Kahakai o Kalakaua in Hawaiian or, in English, the Beach House of Kalakaua.

Side View of the Beach House

Current Cottage is a Replica of the Original

Both beach houses are now gone.  I don’t know what happened to the Court Jester’s house on Kahalu՝u Bay, however, according to the plaque next to King David’s house at Kalakaua, the King’s original cottage was destroyed sometime around 1950.

The Keauhou Beach Resort was built in 1970 and, a decade later in 1980, a replica of King David Kalākaua’s beach cottage was built and placed in the garden park (which was probably also created at the same time) between the resort and the beach park.

While the setting for the cottage is regal, the cottage itself is rather spartan.  However, it appears to be a great place for anyone, king or otherwise, to get away and relax. 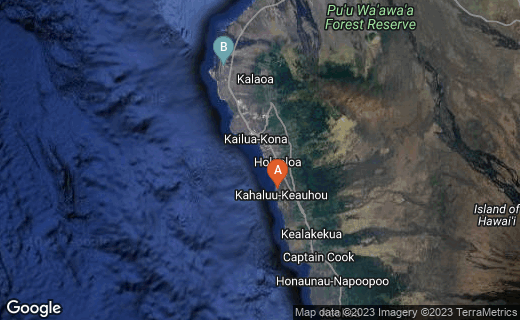 Location of King David Kalākaua on the Big Island of Hawaii

View of Front of Cottage

Of course, King David Kalākaua was not a typical king in the sense that he was born into the royal family and became king when his father died. While he was high born, he actually acquired the crown of Hawaii as the result of an election.

Like some U.S. Presidents, he had to stand for election twice before winning the crown. When King Kamehameha V died in 1872 without an heir it was, under the Hawaiian constitution at that time, up to the legislature to elect a new king.

There were a number of candidates to choose from but the two front runners were William C. Lunalilo and David Kalākaua, both high ranking chiefs. Lunalilo insisted on a general election with the people of the kingdom voting. This was done and Lunalilo won and was crowned king.

However, Lunalilo’s reign was short as he died in February 1874. This time the vote was limited to the legislature and David Kalākaua was elected king.

While his reign was relatively long, he had the distinction of being the last king as the monarchy was replaced by a republic shortly after his death during the short reign of his sister.

This Appears to be a Sitting Room or Parlor

View of Cottage From Across the Pond