California’s highways are among the most beautiful places on Earth. If you love travel and especially if you also love the great outdoors, you should drive down these interstates and highways at least once in your lifetime. All of California’s natural beauty is on display for any drivers on almost any highway, from the windswept Nor Cal beaches to our famous redwoods to the curvy highways of Big Sur.

Unfortunately, this hub doesn't have any of my pictures. I'm usually one of those iPhone photographers who take at minimum 3,000 photos a day, but for some reason, I have very few photos of California highways. One theory says that I was so enraptured by the beauty that I couldn't stand to miss a moment of it. Another says that it's difficult to drive and take photos at the same time.

Brief tangent: if road-tripped isn’t a word, it should be. I love hiking, trains, and especially boats, but there’s something about roads that just makes them the essence of travel and exploring new places. Every time I see a new stretch of highway my love of travel gets freshly renewed, whether in a car or not.

In my few trips out and about the state, I’ve gone through hundreds of miles of California highway, and it doesn’t get old. Even the ones that were winded through fields with of cows and crops had their own charm, though I could have gone without the random whiffs of horse. And of course, some of the roads were incredibly beautiful. Many of my favorite memories are from roads that I don’t have names for, but in this hub, I’ll share the few that I know best. The pictures are from either the Wikimedia or Flickr Creative Commons.

Please enjoy these pictures and my short descriptions. Keep in mind that while these images are lovely, no photos can do these roads justice. If they interest you, consider coming to see them for yourself. And of course, as always, comments will be loved and cherished.

Seeing as I’m in the Bay Area, the two highways I use most days are Hwy 280 and 101. The section of 280 that I usually get to see is strikingly beautiful. I don’t know how scenic the rest of 280 is, because it stretches from San Francisco to San Jose, but the section that we Peninsula folk use to avoid traffic on 101 passes the picturesque Crystal Springs Reservoir (picture below) and also has incredible views of the Santa Cruz Mountains. I appreciate the Bay Area every time I’m on this road.

280 begins at San Francisco and ends in San Jose, connecting cities like Daly City along the way. As it runs almost directly along the San Andreas fault, the scenery on both sides remains relatively undisturbed. It's also has far less traffic than its parallel and mysteriously more popular route, 101. I'd say its one of the lesser known and often missed scenic routes.

This road is insane to drive on. The curves are ridiculous, the road is often slippery, and almost everybody is averaging 90. It’s not the highway for those looking to take it easy, but it’s worth the stunning scenery. The pine trees on all sides are honestly breathtaking, especially as you go along the curves. It’s one of those places that make me grateful to be alive.

However, it's probably a good idea to keep in mind that the route is notorious for haphazard weather, random crossing animals, slipperiness during the wet months, and of course its sweeping curves. Drive carefully, and keep your driving ability and comfort level in mind. Don't let the drivers push you to go faster than you'd like to; safety is a concern for everyone. Though slow drivers can be a bit irritating, it's not a problem as long they remember to keep to the right lanes. Also, do not attempt to take pictures while driving. :D

That said, enjoy yourself on this route. This is a great place to feel the freedom of the road and get to know another side of California. You'll likely see a couple of motorcycles here, as well as on other roads. If you are interested in biking, consider checking out Pashnit Motorcycle Tours or other motorcycle tours, assuming you know how to ride, of course. If you don't, just enjoy driving - preferably in a convertible with "California, Here I Come" playing on your radio.

Ok, technically this road is called “State Route 1”, but it’s far more commonly referred to as “Highway 1”. The route stretches from Orange County to Mendocino, usually right along the beautiful beaches of the Pacific. And when I say “right along”, I mean it. While it runs along the beaches, the route almost always has only 2 lanes, and if you look to the right while driving south, the cliff extends for all of a foot before dropping straight into the ocean.

It passes through the Bay Area as well as Monterey, Big Sur, and Los Angles, so conceivably you could go through all of those on this one road. Be careful, however: some sections of Highway 1 are subject to frequent closures due to landslides.

I've often seen in tour guides and from other articles that Highway 1 is said to be a "tourist destination". However, I've never felt this road to be crowded. In fact, I've rarely seen anyone on here, and the few I see either quickly pull ahead or fall behind. And even when you get caught on your one lane behind a Prius, which in turn is behind a SmartCar, something about the lonely beaches retains that sense of peace and freedom. At least most of the time.

If you do take a trip on Highway 1, I recommend stopping at at least one state beach, as well as Big Sur. Both of those should not be missed on any complete tour of California. Though the beach will likely be neither sunny nor warm (bring a jacket), they are beautiful in that stark, North California way. Sorry, I have no better words to describe them. NorCal beaches are one of my favorite places on Earth.

Of course, Big Sur is worth a trip, whether you plan to camp or not. Just driving between the trees or stopping by one of those remote bird-watching cafes reveals a distinct shade of California that you might otherwise miss.

As said before, none of these photos were taken by me, so thanks to all the people who provided these images. I've only recently realized that I've been taking copyrighted photos, so I've started to use Wikimedia and Flickr. Both of them are fantastic resources for those ultra-specific photos.

Additionally, California's highways cover a great deal of ground and range, so these three roads are not the complete picture of California road-dom. The roads are almost as diverse as the state itself, and, in my humble opinion, they'd be worth a year of travel by themselves. If you enjoyed this hub, Wikipedia has excellent information about every state route, highway, and interstate. Even better, come and see these beautiful roads for yourself.

Interactive Map: Where are these roads? 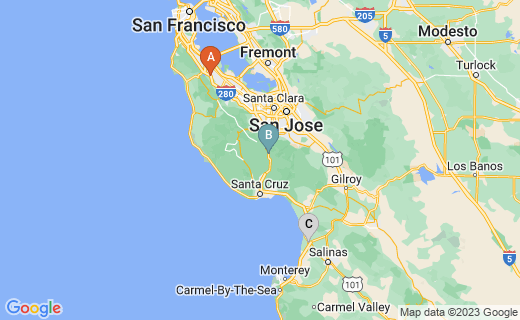