Ambergris Caye from the air

As the title Belize is UnBelizable!! Belize is located in Central America. It is bordered by Mexico, Guatemala and the Caribbean Sea. The main language is English although most people also speak Kriol and Spanish. Before Belize gained their independence 1981 it was known as British Honduras and was a colony of Britain. Belize uses the the Belize Dollar and is pegged at BZ$2 to 1 US dollar. This means that the value of the Belize dollar is always BZ$2 to every $1 US no matter how much the US dollar fluctuates. Belize was a part of the Mayan Empire. Belize has the second largest reef in the world. It has a tropical climate with wet and dry seasons. Belize has a major tourism industry and is also a common stop for cruise ships. 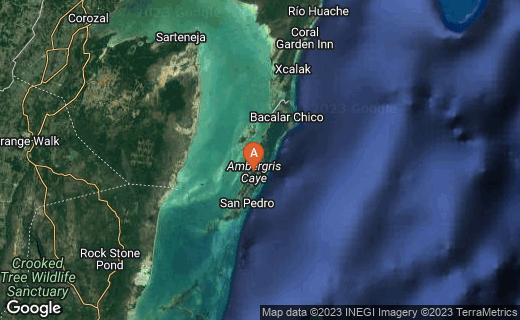 This the location of Ambergris Caye and San Pedro.

My Trip To Belize

I few into Belize city but I was not staying on the main land. I was staying just out side of San Pedro on Ambergris Caye. Belize city is an industrial city and not a place I recommend staying. Ambergris Caye is the place to stay. Ambergris Caye survives on tourism so they have a zero tolerance for crime. Plus it is a small island where everyone knows everyone and if you commit crimes against tourists you can be removed from the island. Any way from Belize City Airport I boarded the smallest plane I have ever been on. This plane held about 12 people including the pilot. There was no co pilot and they just place a passenger in the co pilot seat. The place was so small that they had to arrange everyone in the seats by weight to balance out the plane. I sat right behind the pilot and surprisingly he did not care if anyone used any sort of electronic during the flight. Even take off and landing. If you are scared of flying in this small of a plane you can take a boat to Ambergris Caye but it takes about 2 hours or so where as the flight takes about a half hour. Flying over the Caribbean Sea between Belize City and Ambergris Caye was Amazing. The views of the water and reef were spectacular.

I stayed at Belizean Shores Resort. Once I landed at the San Pedro Airport the resort provided a shuttle to the boat dock. From their a boat picked me up and it was about a 20 minute ride down the coast to the Resort. At the resort dock I was greeted with a fresh towel and a nice alcoholic punch. I visited Belize during the rainy season so the resort twas really cheap. This is by far the nicest "room" I have ever stayed in. The room was on the second floor. It contained a master bedroom, full bath, full kitchen, dining room, living room, balcony and a bedroom on the third floor with 2 single beds. This resort was amazing!! The balcony looked out across the beach toward to the sea. The beach had hammocks to lay in and was white sands however, the water was full of turtle grass. Although the turtle grass is awesome for snorkeling in because of all the sea life its not like a beach in Florida. Plus there are no waves because of the reef being a few hundred feet away. Not to worry! There is so much there to do that I did not spend any time by that beach except for walking on it. The resort restaurant had great food at great prices. There is also an amazing pool with a swim up bar. Joe the bartender is wonderful. He is always happy and loves to talk. He will also tell you the best places to go on the Caye. The resort has golf cart rentals for riding around the Caye. It has an outfitter to book all your excursions through and you can even rent kayaks to paddle out to the reef. There is also a water taxi to take you to the city area of the Caye.

The food was excellent. the little restaurant at the Resort had amazing fresh fruit and sea food. They had this awesome watermelon juice that I could not get enough of. A few resorts up the beach there was a little store. You could get all kinds of food at that store to take back to your room which is a great idea for late night snacks as the restaurants usually close around 9 or 10. You can also walk up to the beach to a ton of other resorts that all have awesome food! Its all pretty cheap! One of the other resorts had a restaurant where you are under a palm roof basically sitting on the beach and the tables were lit by oil lamps. The food was outstanding! Its a good idea to make reservations at this place or get there latter in the evening as it is a very popular restaurant. Some times the resorts will have different events and gatherings and at these gatherings there will be buffets. These were pretty good. At these events there is music playing and a lot of locals selling their wears.

If you choose to go into the San Pedro area there are a ton of little restaurants and bars that serve excellent food. I was lucky enough to be there at the beginning of lobster season so every place had lobster specials. The lobsters were super fresh and by that I mean they were caught a few hours before they were served. There was one place that I wish I remembered the name of on one of the side streets. IT was basically a family's kitchen with some tables and chairs. I have a lobster burrito there. This burrito was stuffed with lobster, more like over flowing with fresh lobster plus there was an entire lobster tail on the side. Soda was BZ$2. I drank 3 sodas and my dinner was still under BZ$30 ($15 US). I really wish I could remember the name of the place, but since I can't just ask Joe the bartender at the pool bar at the Belizean Shores Resort. He will Know the place. There were a lot of articles on the walls of the restaurant about the place so its kind of well know but it was easy to get a table at.

If you go on any excursions through the Belizean Shores they usually provide food. Depending on the length of the excursion its either fresh fruit, beverages, beer and snacks or full lunches. Even this food is really good. Oh and definitely order a Dirty banana ( I think that is what it was called) at the pool bar from Joe!

As I said earlier a lot of the resorts have different events on different days. They usually include food, music and other activities. If you want a quiet evening then there is plenty of open beach space away from the resorts where you can get beautiful views and of the sea and the stars. This is a very safe area so you have nothing to worry about walking on the beach in this area in the dark at night. You will run into very few people and they are either locals returning home from work or couples walking the beach to restaurants or looking at the stars.

If you are looking for more excitement there are lots of bars in the town area. There are also a few dance clubs and night clubs. However while you are there you need to check out the Chicken Drop!! The Chicken Drop is held every Wednesday in San Pedro at the Spindrift Hotel's Pier Lounge beach. This has been happening since 1988. This has to be one of the craziest things I have ever seen. They have a happy hour from some time around 4 pm until some time around 6 pm. Every on the Caye operates on a laid back schedule so there are no real exact times. After happy hour the Chicken Drop begins!

The Chicken Drop happens on the beach. There is a big checker board that has numbered squares. The squares are randomly numbered. They sell tickets for each number on the board until all the numbers are sold. Then they bring out the chicken. They do a big production of it. They even ask one of the spectators to blow air on its but. Every one crowds around the board and they release the chicken. Then everyone starts yelling and cheering trying to get the chicken to their square. AND POOP ON IT!! When ever the chicken poops the game is over and who ever owns the ticket for the square wins the pot for that drop. Like I said it is absolutely crazy. This is definitely a MUST SEE!! They will do this a few times a night. For those of you concerned about the chickens well being they are well taken care of. This is the only thing the chickens are used for then they get to go back to living an enjoyable well fed island life until the next Wednesday. But like I said you must check this out if you go to Belize!!!

The End of Part 1

When I began writing this I did not realize how much I had to say about Belize. WOW!! Its such an amazing place and I have hardly even covered anything. I have decided instead of writing a 10,000 word hub on Belize and my experience I am going to break it up. So this is going to be the end of part 1. I have finished part 2 so here is the link to Belize is UnBelizeable Part 2.

Find out more in Part 2