From rugged coastlines, multicultural vibes to warm & friendly folk; Broome in Western Australia ought to be top of your list of priorities if considering a visit, and here are some of the reasons.

Where else better to commence your journeys than at the priceless and inviting Broome Museum? To start off, the town’s social history coupled with interesting facts about the surrounding area of Kimberley are retold in great length by the Broome Historical Society which undertakes to educate and impress all those enthused about new cultures and traditional practices. Learn of the early European settlers of the 17th century before being treated to tales of how the local pearling industry was unearthed and furthered into becoming one of the area’s prized possessions.

Fringed by tinges of greenery in its immediate vicinity and fenced off to a considerable height is the Japanese Cemetery. Here, a somber mood prevails as the visitor moves past each gravestone upon which inscriptions in Japanese are found. Each grave is symbolic of the hazards that the pearl divers of old had to undergo and the drawbacks of the early years of Broome’s pearling industry.

Reminiscent of how life once was back in the 20th century, the open-air cinema in Broome is a delightful setting which allows for time to be spent enjoying your favourite blockbuster sequels, be it those that reach the giant screen these days or that classical masterpiece that thrilled large audiences all those years ago. The cinema was established in 1913 and is arguably one of the town’s most visited attractions among locals and foreign nationals.

Should the thought of jumping off a towering cliff into turquoise seas usher in a sense of adventure like no other, then do make a beeline towards Gantheaume Point. For it is here where thrill seekers like yourself can take on the demands of cliff jumping; a popular pastime enjoyed by almost everyone daring enough to give it a try. A good time to visit is halfway through the region’s dry season as summer is when jellyfish inhabit the seas and therefore, must be avoided at all costs. The activity is best experienced in groups but even if you want to stand back and watch on as your best mates and family attempt every trick in the book, then that too can be quite satisfying indeed.

Ascend the Staircase to the Moon

Yes, you did read it right. Come the dry season and winter in Broome, a natural phenomenon which is fondly referred to as the Staircase to the Moon takes shape. During the above period, the moon rises from beneath the waters and in turn, causes a ripple effect to materialize that highlights a staircase reaching to the moon. Thus, owing to its spectacular scenery, travellers can be seen communing in their numbers during the town’s winter season.

Renowned for being at the heart of stunning sunsets and an assortment of appealing natural beauty strewn in every direction, Cable Beach is Broome’s best-kept secret. However, if you do not intend on getting your toes or torso wet, then hopping into a 4 wheel drive will be the best way to catch a glimpse of all that Cable Beach has to offer discerning vacationers. Though a bumpy ride is more or less a given, one will certainly be able to immerse one’s senses in mesmeric vistas of lapping ocean waters, earthy hues across the sky and miles of splendid beach. Having access to a pleasing form of accommodation in Broome will be of great benefit to you. In this regard,many propertiesare as close as a mere 3 km from the beach that can be looked at when deciding on where one will be staying at.

To travel through and stay in Broome and to leave without indulging in some of the local food and beverage would be indeed a punishable offence. The town is littered with quaint beachside eateries, cafes, and diners that collectively offer a slice of Broome in more than one way. Murphy’s Irish Bar which is known for its open mic nights on a Tuesday must not be forgotten and so too the Matso Brewery which serves up a series of beers that include ginger and chillifavours. On the flip side, Zanders is found near the coast and on top of the diverse menu at its disposal, paves the way for time to spend admiring Cable Beach in all its glory. Although, if a decent distraction is what you long for on your holiday, then consider stopping by Dragonfly Café where good coffee and white chocolate raspberry muffins are but a few of what is provided. 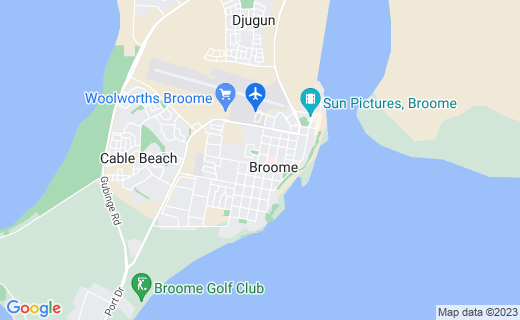