Many people who visit Edinburgh also find time to head north over the Forth Bridges to visit the famous golf town of St Andrews in Fife. Maybe you will too. But before you plot the quickest route from Edinburgh to St Andrews (a journey of around 54 miles) stop to discover the beautiful sights you could enjoy if you take the more scenic route.

Here we will take a tour of some of the best beaches on the stretch of coastline from Edinburgh to St Andrews. This lovely stretch of coast has so much to offer the visitor to Scotland that you will be more than happy to add a few miles to your journey.

Where in the World is Fife?

Fife is a county of Scotland. Well, officially it is still a Kingdom and you may hear it called The Kingdom of Fife. This is not an affectation or an attempt to have a laugh at the expense of gullible tourists. Fife really was a kingdom, home to a number kings and queens of Scotland. King Malcolm and Queen Margaret had a palace in Dunfermline in the 11th century and you can still see the ruins today beside the Abbey. Falkland Palace in central Fife was a favourite of several monarchs including Mary Queen of Scots.

Fife is found directly to the north of Edinburgh, across the Firth of Forth. It is separated from Dundee on its northern side by the Firth of Tay. Surrounded as it is on 3 sides by water, Fife has an impressive coastline for its small size (512 sq miles: source Wikipedia). 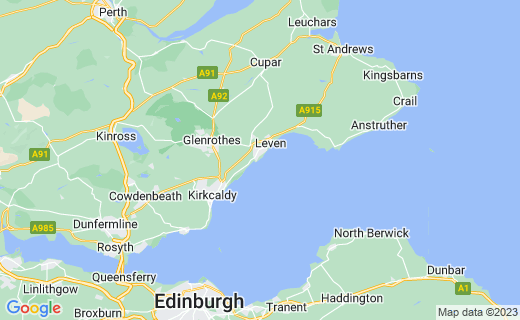 The first beach to stop at on your trip north from Edinburgh to St Andrews is Silver Sands. This is the beach of the well-kept village of Aberdour, where the train station is well-known for its award-winning floral displays.

Silver Sands has also won many awards of its own. In 2014 it was a Keep Scotland Beautiful Seaside Award winner once again. Silver Sands beach has now won this important award an outstanding number of times.

It is a Blue Flag beach which means it has met high standards for cleanliness, water quality, and safety, and promotes environmental protection and education.

It is also family-friendly with a children's play area and public toilets. Dogs are not allowed on Silver Sands beach between April and September but can be taken on the nearby Black Sands beach.

Just a little further up the coast you will find Kinghorn, a small Scottish town with a railway station and a selection of shops and cafes. The large beach to the south of Kinghorn is known as Pettycur Bay.

Like Sliver Sands, Pettycur Bay is an award winning beach. In 2010 it won the Seaside Award for the 10th year in a row in recognition of its meeting strict standards in providing information to visitors, effectively managing litter and promoting a safe environment for all.

At low tide the beach of Pettycur Bay is a wide expanse of clean golden sand. It is an area of environmental importance, being a Site of Special Scientific Interest, not least as a result of the wading birds that are attracted to the shallow beach.

It is a beautiful beach for a quiet walk or for finding an uncrowded spot to sit and relax while children play.

There are fewer family facilities but there are public toilets and the parking is currently free. Dogs are allowed on the beach.

On The Map: Aberdour and Kinghorn 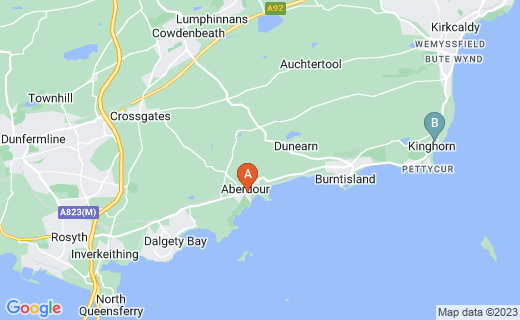 The Leven East beach is more famous than you might think. Artist Jack Vettriano grew up near here and his love of the local beach is reflected in many of his paintings including The Singing Butler which sold in 2004 for £744,500 (source: Wikipedia) and is known and loved around the world.

Leven East is a holder of the prestigious Blue Flag award and a 2010 Seaside Award.

Although Leven is arguably not the most attractive of Fife's towns, the seafront offers a number of recreational facilities to visitors.

These include a promenade, play areas for young children and picnic seating, a skateboard park, amusement arcades, crazy golf and putting green, and a nearby public swimming pool.

The beach is long and sandy. Leven East is an especially popular destination for families.

Elie is situated in the East Neuk of Fife, a coastal area that has a string of pretty fishing villages. Elie itself is well worth a visit, with its attractive high street boasting various small shops and a choice of cafes and restaurants.

The award-winning Ruby Bay is a smaller and more secluded beach than the others. It is located in the bay by the lighthouse.

Ruby Bay has again in 2010 won both a Seaside Award and a Blue Flag award.

This is a lovely spot not only to explore the beach but also to take a walk among the wildflowers and peer into rock pools where you may see the ruby red sea anemones.

Although it seems like these would be behind the name 'Ruby Bay', I've been digging about for answers and the name of the bay in fact comes from garnets that have been found there (source: Undiscovered Scotland). A garnet, as you may know, is a deep red gemstone that could be confused with rubies.

You also can wander into Lady's Tower, which is a well-preserved ruin of a changing room built for the local Lady in the 1700s (source: Wikipedia).

Parking is currently free, dogs can be walked in the area, and there are well-kept public toilets. There are opportunities for sea kayaking and sailing for those looking for a more active visit.

On The Map: Leven and Elie 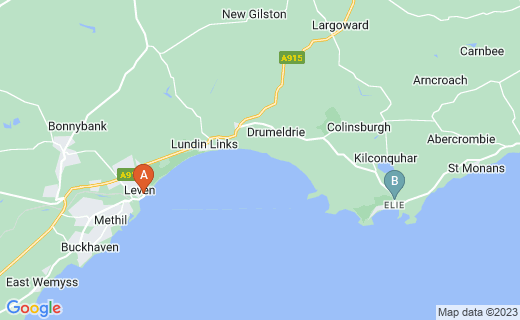 The Beaches of St Andrews: East Sands and West Sands

The beaches of St Andrews are more well-known and so I haven't included them here. But I can't finish without giving them at least a mention.

The West Sands beach is a long sandy stretch that forms the coastal border of the world-famous golf courses. It is a Blue Flag beach.

This beach is also famous for being the beach along which Eric Liddell (Chariots of Fire) would run.

It is a popular spot for kite sports. Dogs are not allowed on the beach.

East Sands is smaller but is a well-kept beach which is ideal for families and those not wanting to stray too far from the amenities of the town.