Walletpop has named Jensen Beach as one of the Top 20 Cities for Retirement in Florida, particularly for its affordability.

The city is located about 70 miles south of Melbourne, the Number One pick for Florida retirement, down the Florida east coast. This part of the coast is called the Treasure Coast, recalling pirate vessels of the 17th Century.

In 1881, pineapple plantations began to proliferate around today's Jensen Beach and gave rise to the town of Jensen.

This business was aided in 1884 when the railroads came through to provide quicker transport of pineapples to the marketplace. Although no longer a large contributor to the local economy, this fruit is honored yearly each November with the Pineapple Festival in the Historic Downtown Area. The festival provides entertainment, music, rides, regional foods, and a Bahamian Marketplace.

Pineapples and other regional dishes are brought in from Eleuthera, Bahamas for the festival. It's name is Greek for "Freedom" and the town has been a sister city of Jensen Beach in the past.

The Bahamians of Eleuthera began a pineapple celebration of their own in recent years -- The fruit is a symbol of hospitality to them, and they are glad to send shipments to the Jensen Beach Pineapple Festival, along with additional food items and musicians. 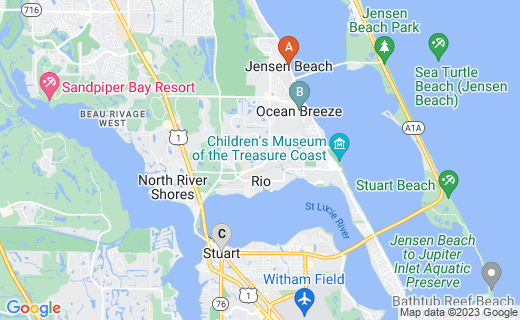 The town of Jensen Beach is unincorporated, but contains an incorporated town inside its borders. This is Ocean Breeze Park, whose leaders claim, "We enjoy one of the lowest electric utility rates in the state.".

The incorporated community is totally a mobile home park and all residents live in trailers, many of them double-wides.

All these homes likely less expensive than houses and probably incur lower property taxes, which is useful in retirement living. Sand dunes and its shopping center, Ocean Park Plaza, are some of the local attractions.

The Ocean Breeze Park Mayor at this writing, Dorothy Geeben, is 101 years old (reference: MSNBC.com) and about 67% of the residents are over age 64 and fairly active. Another advantage of the community is that mail is delivered right to the door and not at curbside mail boxes like much of the surrounding areas, so residents do not have to walk in order to pick up their mail.

Tourism is a major growing industry in this market area, resulting in increasing numbers of Florida visitors. Best attractions include:

The first residents on Jensen Beach were the early Ais Native Americans, largely a fishing society that loved the coastal waters and their wildlife. They were happy in the abundance of the New World.

In 1565 or earlier, the Spanish arrived in this area and constructed forts along local rivers near the Atlantic Coast. Later, Spanish ships full of treasure arrived, as did pirates.

James Hutchinson was able to receive a land grant from the Spanish over 200 years later in 1807 to raise hogs (unsuccessfully) on the Indian River. The current Hutchinson Beach is named after him and is a major tourist and vacation attraction.

The Seminole Nation moved into the territory before after the Spanish and other settlers. They included African Americans among their members. However,the Armed Occupation Act of 1842 permitted white settlers to develop the land from Sewall’s Point on the south to the Sebastian River to the north (today's Treasure Coast), displacing the Seminoles.

John L. Jensen was a Danish import from W. Va, and pineapple grower (1881, see above). The town of Jensen Beach was named in honor of his success.

Businesses such as fishing and canning grew after pineapple growing declined and by 1960, finance was also becoming a major industry. Healthcare, Tourism, and Finance are large industries today.

The Jensen Beach Community Redevelopment Plan currently targets new growth in the residential, commercial, and tourist sectors of industry on the nearby St. Lucie River in an ongoing campaign to grow an expanding economy.

Jensen Beach is a large center for sea turtle nesting places and these areas of the waterfront are blocked off from he public in order to protect the turtles and their incubating eggs. In fact, the areas combine to be known as Jensen Sea Turtle Beach.

The local Environmental Studies Center is involved in several projects for wetlands and sea creatures and includes children in field trips and Family Day activities for awareness of the environment.

A new 62-parking-slot boat ramp was constructed at Jensen Beach on the Indian River. No fee is charged for launching boats from the ramp, which is located next to the US Sailing Center in Martin County. Sail boats and motor boats coexist with little problem.

Fishing is also popular in the area and children's' fishing clubs as well as a sail-fishing organization for adults are available. Biking, swimming, and hiking are other attractions, as are surfing, golf, and tennis.

Old Home Week is held at the local Elliot Museum in September each year, offering a celebration of historical archived materials that include photos from founding families.

Jensen Beach lies between busier Palm Beach and Port St. Lucie, In the summer, many Northerners that came to Jensen Beach for the winter return north, providing a quiet atmosphere and a substantial amount of lodging available.

Around 8,500 jobs are available through ZipRecruiter.com and Indeed.com in and around Jensen Beach on any given day and this is double the number available on average during 2010. During summer 2020, approximately 25% of posted jobs involved healthcare.

The local employment market reflects the high number of seniors living in the communities with a large number of healthcare job openings.

Tourism is also a large industry in the area. Leading advertisers of jobs around Jensen Beach include: