An Urban Beach In a Floating World

The City of Detroit has successfully developed the Detroit International Riverfront as a business and recreation district and a draw for visitors to the city. I enjoy riding the central city's People Mover monorail out over the water where I can see more of the riverfront and the developments that are ongoing in Detroit.

One of these developments is the startling complex of activities and venues on Belle Isle - including a beach - all accessible by the General MacArthur Bridge from Downtown Detroit in a distance of less than one-half mile. The distance can be easily walked on sidewalks separated by a barrier wall from East Grand Blvd., which runs over the bridge, and biked on a bicycle lane painted between the auto lanes and the walkway walls on either side of the bridge. The island area has become scenic to the extent that it has appeared in several locally produced films and television shows in the late 2000s and early 2010s, and views of the Detroit Skyline from the island are popular photographic subjects.

Many of the buildings on the island are from the turn of the 20th Century, and some are undergoing redevelopment. The old Belle Isle Zoo closed, was replaced by a Nature Center and in the 2010s, was targeted for refurbishing into a Michigan-based species wildlife zoo in association with the Detroit Zoo. Approximately 300 animals were gathered form the closed island zoo to create the Nature Center and a small heard of fallow deer still live at the center.

Aside from all this, Belle Isle contains several of its own lakes and nearly three miles of canals to travel by canoe. While outdoor activities are many, the island also sports a hsitoric casino building that is used only for weddings and receptions.

The Belle Isle Aquarium opened in August 1904, closed from 2004 - 2014, but reopened in February 2015, because the community came forward to keep it running.

Near the Riverwalk on the International Riverfront, Wheelhouse Bicycle Shop rents bikes of all kinds at reasonable rates and services any bikes, so you can rent a bike or take yours and head over to Belle Isle along bike paths near the waterways - I love this service! In fact, Wheelhouse runs a host of bike tours around the city, based on interests and themes like architecture, outdoor building murals, historic auto plants, festivals, markets, and one of them is a tour to Belle Isle! Another is a ride around the city's "green" sustainable waterways. Wheelhouse staff lead a tour around the Belle Isle venues, architectural achievements, State and National Historic Sites that include ride-bys and stops at:

Check out Wheelhouse "Tours" page for the weekly and monthly Bike Cruises you can join around Detroit the next time you're in town. This is the most biking fun I have seen anywhere.

Night at the Aquarium Fundraiser 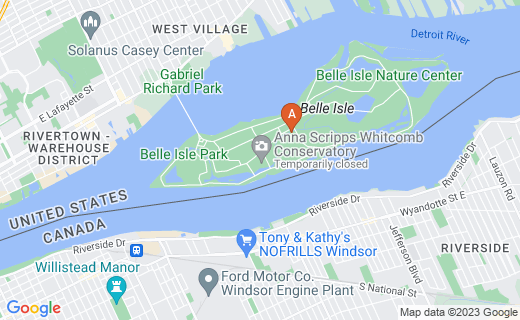 There's plenty to do on Belle Isle, and at the DeInternational Riverfront are many places to eat and visit. River and bike cruises depart frequently.

Belle Isle Beach supports green space and a substantial half-mile tract of sandy beachfront that visitors can use for swimming and photography of subjects like the MacArthur Bridge, the Ambassador Bridge to Windsor ON, freighter ships, and a number of Detroit River cruises that include at least one old fashioned Riverboat. A giant water slide operates from June through Labor Day and a playland for children is open during these dates as well.

Other areas of the waterfront are used for boating and fishing. In addition to all this, the island offers a Par 3 golf course, and a separate set of practice putting greens, sand traps, and a driving range. Further, the island holds a number of basball diamonds and tennis courts, other recreational sports venues, and the headquarters of an adult co-ed Futbol soccer league (see link below).

Wreck of the Edmund Fitzgerald

Marble Lighthouse on the Beach

Belle Isle is furnished with its own lighthouse, called the William Livingstone Memorial Light, which stands on the east end of the island. It is, to date, the only lighthouse in America constructed of marble. It was constructed and named as a monument to a man that advocated for safety in shipping and navigating of ships through the Great Lakes.

Many sailing and steamer ship accidents have occurred through the centuries around the Great Lakes, their bays, and other inlets. Most of the US States surrounding the lakes offer tours of sunken ships around the Great Lakes shorelines. Although rather sad, the boat skeletons are also fascinating pieces of history and legend. Cities along the shores of Lakes Erie, Huron, and Michigan often sponsor film festivals and historical events in which films are shown concerning famous shipping accidents and mysteriously "disappeared" ships.

Grammy Award for Song of the Year

Belle Isle's Conservatory and Botanical Gardens, near the aquarium, are divided into many sections, according to theme and plant type. Tropical plants are lush and abundant with such as ferns, palm trees, orchids, and others; while a desert area includes cactus and other arid climate plants Asian plants are also displayed and one section of the conservatory is dedicated to commercial plants like coffee, sugar cane, and bananas. A huge fountain is located in the conservatory as well for water interest. Outside, the complex features several gardens, one with a lily pond.