Binondo Food Trip: Where to Eat When in Manila Chinatown

Did you know that the world's oldest Chinatown can be found in the Philippines (despite the current dispute between the two countries)? Binondo was established by the Spaniards in 1594. It was built just outside the Intramuros which literally translates to within the walls, making it part of the towns which are extramuros or outside the walls.

Binondo is always bustling with commercial activity for which the Chinese are known for. They are said to have come to the Philippines through the land bridges which eventually disappeared over time. Here can be found many gastronomical and cultural treasures for those who will actively seek it.

Despite having lived in the country's National Capital Region my whole life, I have never set foot at Binondo yet, if not for this arranged Big Binondo Food Wok tour by Old Manila Walks which was participated by the Phil-Thai Cultural Organization. I was invited to join them and so my first encounter with Binondo happened.

The group met up at the Binondo Church or more aptly the Minor Basilica of St. Lorenzo Ruiz, named after the first FIlipino Saint. There were a lot of horse-drawn carriages, calesa to Pinoys, outside the church so if you plan on visiting the place, be ready for the strong smell of horse-dung.

Admittedly, we were not able to sample all that Binondo has to offer but we really got a taste of the best. Below is a list of all the places we visited and what we had there. I have no idea regarding the prices of the food because everything was taken care of by the guide. However, I will update this list when I get the chance to visit Binondo again on my own.

Our first food stop was Cafe Mezzanine. It was located at the second floor of a building on Yuchengco Street. Because all their revenue is donated to the Binondo Paco Fire Search and Rescue Brigade, Cafe Mezzanine also identifies itself as A Fireman's Coffee Shop.

Since it was only our first stop, we ate light to make sure we still had space for the following meals. Here we had Kiampong or salted rice with peanuts, some soup, and iced brewed coffee. I'm not sure if they really serve Kiampong as is or if it is sold as a meal because we were part of an arranged tour. However, I know that it is an all time favorite from the restaurant. It was alright and tasted like fried rice. The brewed coffee was a little weird to me because I'm not really a coffee person and I never liked my coffee black. The soup was clear chicken broth (I think) with some pechay.

We weren't served with soup #5, another favorite from the restaurant, probably because there were a lot of elders in our group who might feel averse to it. This is a soup which is a famous aphrodisiac, made from a bull's balls (pun intended) or testicles. Aside from awakening one's libido, this is also said to improve metabolism. Other soups offered in Cafe Mezzanine are as follows:

Some of the other favorites are:

They also serve dimsums such as pork dumplings, hakaw, and xiao long bao. 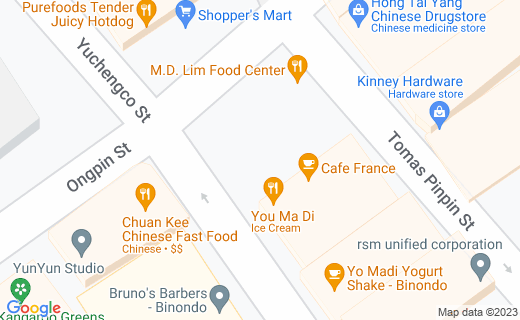 Also on Yuchengco Street is this hole-in-the-wall famous for its freshly made dumplings. Dong Bei Dumpling serves authentic dumplings which are made on the spot. Based on an article I read about the place, Dong Bei literally translates to Northeast which is why it's probably safe to assume that the food served here is from the North of China. This is weird though because our tour guide, Ivan Man Dy, said that those Chinese people who migrated to the Philippines (AKA overseas workers) were mostly from the South because those from the North were already well off to begin with and did not feel the need to go anywhere. This means that the rich Chinese businessmen in the Philippines now are those who weren't so rich in their motherland.

The place is a bit small and cannot accommodate large numbers of people but try your luck during one afternoon if business is slow and you just might be able to get seated comfortably. It is quite warm when it's packed but it feels alright when there aren't much people inside.

We had some of the following:

I really loved them both but I prefer the pancake over the kutsay. For one, kutsay and steamed like the usual dumplings. However, the pancake, like its namesake, is round, flat, and fried. It's fun and yummy at the same time. One small circle of a pancake dumpling is divided into four small pieces and costs around 100 PHP. I think you can also choose the stuffing you prefer for each kind of dumpling you want. They also serve the following: 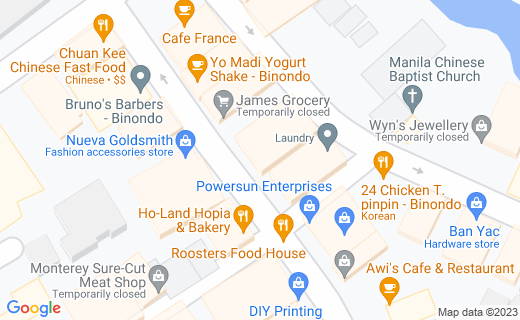 If you can tell from the stall's name, this isn't a restaurant at all. They didn't even try to think about what to call their place because they are too busy making wonderful siopao. This little store along the street sells three kinds of siopao or hot bun. These are:

NOT. The guide was just playing around because Chinese people are known for/or rumored to cook cats for their siopaos. It's actually just some cooked pork but it's so good you would not need siopao sauce. Their siopao retails at around 15 PHP a piece.

They also sell Bicho-bicho which is like a poor man's churros. It's like a long, soft, and twisted, pan-fried doughnut, dusted with some confectioner's sugar. It is a really yummy snack but remember to mind your calories.

Aside from these, they also sell some classic Chinese food like kikiam, hopia, and some soy milk.

No Name Water Siopao can be found at 808 Benavidez St, right beside Shin Din Kha Maki Palace. The place is very unassuming so it's easy to miss. 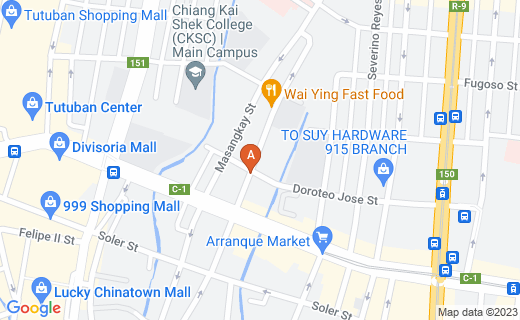 HOPIANG BABOY is not made from real pork. Instead, it is made of kundol or wintermelon.

This hopia place has been a rival of Eng Bee Tin for a long time. Here we tried all sorts of hopia-- from pork, to ube, to monggo, to macapuno... literally everything the store had to offer. You may want to really stop and forget counting your calories here because each hopia has a whopping number of calories and you might just not enjoy each bite if you're too concerned with the calories. Aside from the hopia, they also sell a lot of other Chinese ready to eat (tikoy) and ready to cook goodies such as siomai. Most of the stuff sold here can be considered as dessert because they are mostly sweet. I also learned that hopiang baboy (pork hopia) isn't actually made from pork but from kundol or wintermelon.

This was our last stop. Here they serve Hokkien-style lumpia/spring rolls, very unlike the lumpia we Filipinos know (shanghai). They are very thick rolls which you can probably grasp with a single hand but with difficulty. The rolls aren't fried so I think it is served immediately after rolling them up. Also, instead of containing mostly meat, this lumpia contains mostly vegetables such as julienned turnips, carrots, served with peanut sauce. 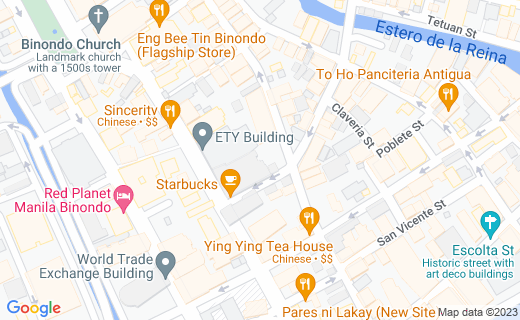 Summary of My Binondo Food Trip

Below is a table I arranged for those of you planning to go on a food trip in Binondo. Keep in mind that these are just some of the food places you can try and that this is part of an arranged tour so it's really very limited. Don't be afraid to explore and look around but also remember to do your research before hand.

While you're in the area, be sure to drop by these following places also:

There are other cool places in Manila that would be worth a visit and I'll be sure to write about them soon. Enjoy food tripping! Let me know how it went in the comments below.

What to eat and where to eat