This romantic piece of land, covering about 59 hectares, was established as the Royal Botanic Gardens in the year 1821 by the British colonial government. The boundaries of the garden is marked by the Kandy-Peradeniya road from south, and the right bank of River Mahaweli which flows like a snake around the rest of its limits covering approximately ¾ of its circumference. The entrance to the garden is on the Kandy-Peradeniya road, at close proximity to Galaha Junction. The Royal Botanic Gardens are open from 9.00 am to 5.45 pm. Tickets are issued until 5.00 pm only.

Peradeniya is met after about 110 kilometers on the Colombo-Kandy highway (A1). From Peradeniya junction, it is about one kilometer to the entrance of the Royal Botanic Gardens, passing Peradeniya Bridge (over River Mahaweli) and Galaha Junction.

When coming by ordinary train from Colombo, it is best to get down at Sarasavi Uyana Railway Station. From there, it is about one kilometer to the Garden's entrance. If you take the Kandy Intercity Train from Colombo, get down at Peradeniya Junction Railway Station, and take a bus or a three-wheeler (Tuk Tuk) to the Garden's entrance because it is about 2 kilometers from there to the destination. If you don't mind walking, it is great to do so while enjoying the cool climate and the great environment of the hills. The coordinates of the Royal Botanic Gardens are 7° 16′ 16″ N, 80° 35′ 44″ E. 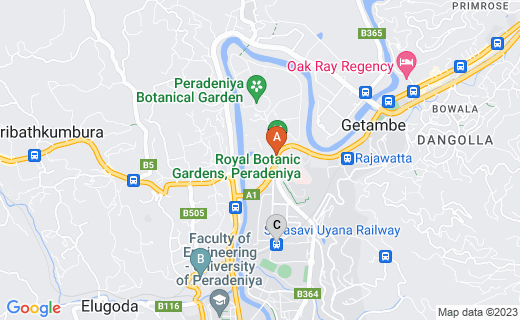 The ticket counters and entrance.

The History of the Garden

The history of Royal Botanic Gardens of Peradeniya goes back to 1371 AD when King Wickramabahu of Gampola Kingdom was ruling. Those days, it was a garden used only by the king and his officials. King Wickramabahu-III used to hold his Royal Assembly here. During the reign of King Wimaladharmasuriya-II (1686-1705) a Buddhist temple was built in this garden and the religious activities were started in it. Later, King Rajadhi Rajasingha (1779-1797) renovated this temple of the Garden. In 1803 the British tried to capture the Kandyan Kingdom. In that effort which ended in failure, the British army destroyed the temple completely.

The formation of today's Botanic Garden took place in 1921 by Alexander Moon.The primary intention of the British colonial government was to introduce coffee plant, and a number of other tropical fauna of economic value, such as the Rubber tree, to Sri Lanka. Later, in the 1840s more botanic emphasis was given to the activities carried out by the Garden, under the Garden Superintendents George Gardner (1844) and George Henry Thwaites (1849). Plants brought from Kew Gardens in London were planted here. The Royal Botanic Garden played a major supportive role in establishing the Tea industry in Sri Lanka in the late 1820's. The Department of Agriculture was established in Sri Lanka in 1912, and the administration of the Royal Botanic Garden was taken under it.

There are a collection of about 4000 plant species in the Royal Botanic Garden, Peradeniya. Among them, the Giant Bamboo, Double Coconut, over 180 species of gorgeous Orchids, the Ehetu tree which spreads its branches and foliage out to staggering 2000 square meters, are winning the attraction of the visitors. The sides of the garden avenues are beautifully laid out with plants of colourful foliage. The Royal Palm Avenue, lined with majestic palm trees, and the old suspension bridge over River Mahaweli at the far end of the Garden add magnificence to it. Sri Lanka National Herbarium is also situated in the Royal Botanic Garden of Peradeniya.

The Royal Botanic Garden has a fine restaurant in it, where you can enjoy snacks, breakfast, lunch, soft drinks, juices and desserts. It is also possible to bring your packed meal and have it anywhere in the Garden convenient to you. Find a good grassy place near a water tap and enjoy your meal. Keep in mind to dispose all garbage in garbage-bins abundantly available in the Garden. A resting area is provided in the Garden, to the right hand side of the entrance. This area has washrooms, a drinking-water dispenser, and shady trees with garden chairs under them to sit and relax. The Royal Botanic Garden of Peradeniya is a must-visit place for anybody who comes to Kandy, Sri Lanka.