Burj Khalifa, Dubai, The Tallest Building in the World

Rising up out of the Dubai skyline, the Burj Khalifa points its silver finger towards the heavens in a majestic statement of man's triumph over the elements.

A grand combination of art and engineering the building stands as a beacon that represents man's progress as the tower stretches up and dominates the new city landscape in which it sits.

A powerful motif of the modern world the Burj Khalifa is a representation of our future that stretches 829 metres upwards.

And by visiting the Observation Deck you can be part of the vision.

The Observation Deck stands 452 metres (1483 ft) high. That is 33 full size American School Buses stacked end to end on top of each other. Would you mind watching the world go by from that height?

The Burj Khalifa Observation Deck, "At The Top", can be found on the 124th floor of the tower.

The entrance to the tower can be found on the lower ground level of the Dubai Mall, so why not combine your visit with a day at the world's biggest mall? You can book tickets for the Burj Khalifa in advance, so book for a specific time and follow that up with a few hours shopping. Allow about 2 hours for your visit to the Tower.

You begin your journey with a short exhibition about the conception and building of the tower before progressing on a travelator through a history of Dubai and then a short elevator ride to the Observation Deck, which as well as enclosed views all round features an open-air terraced area. There is a featured gift shop for souvenirs.

The ticket office is located on the lower ground level of the Dubai Mall. You purchase tickets for a specific time and date, so it's easier to book in advance. This can be done at the ticket office or online.

Ticket Prices as at March 2013

Souvenir of the Burj Khalifa

The observation deck is equipped with telescopes, including the amazing "Behold" telescope which allows you to look back through history. As you look through the telescope across the modern city what you will see is the land as it was before Dubai exploded as the world's most modern city. So what you see is.....desert. It is certainly an eerie experience to be atop the world's tallest building, in one of the newest cities in the world and seeing Dubai as it was. Well worth the entrance money alone.

The View From the Top

Window Cleaner at the Burj Khalifa

Where is the Burj Khalifa? 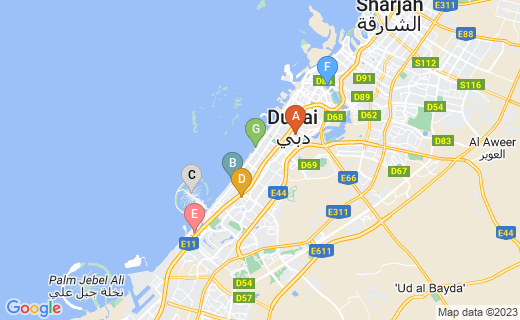 D
Mall of the Emirates:
The Mall Of The Emirates 2 2 - Dubai - United Arab Emirates

The Burj Khalifa at Night