Have you ever been to Cambridge, a remarkable university town that lies on the river Cam in East Anglia, in England? It worth to take some 50 minutes by train from London to see all those medieval buildings, green grass in parks and possibly in a college's court and the most important - to feel the spirit of science and incredible achievements! Cambridge is a town of Newton, Bacon, Darwin, Maxwell, Hawking and many other famous scientists.

Cambridge is a town of pedestrians and cyclists, most of them being students and scholars. Among its population of around 110000 there are approximately 25000 students. Contrary to life in a big city, here one can regularly meet an acquaintance or friend on the street.

In this article, Cambridge will be presented in words as well as in photos.

- all photos presented in this article are made by flysky.

The center of town is of some 1.5 km in diameter and it is surrounded by road and partially by the river Cam (see the map bellow). Around 1 km away from this circle there is the train station (Station Road and Hillsroad lead to the center). It can be said that there are many green areas while the rest of center is actually consisting of colleges. Of course, there are several hotels, shops, bookshops and other interesting places but the colleges dominate the town (see the map bellow).

The weather is often rainy and windy, as usually in England. The temperature is in average a few degrees lower than in London.

Boating on the river Cam is very popular in Cambridge. Many tourist and students as well like this activity. There are numerous bridges on the river, many of them being wooden footbridge. One of the most notable bridges across the river Cam is the Mathematical Bridge (which official name is “Wooden Bridge”). Originally it is built in 18 century, and rebuilt twice, in each of the following century. The bridge owe its nickname to a special design. Namely, the timbers are arranged tangentially and radially, which triangulate the structure.

Trinity street is a notable street in the center of town, called by the Trinity College which is situated there. One of the street perpendicular to the street is Market street, where the town's market is placed. At the end of Trinity street there is impressive King's College (next picture).

Nowadays, the city of Cambridge is the administrative center of the county Cambridgeshire. City status was conferred to Cambridge in 1951. The population of Cambridge gradually increased from 10000 at the beginning of 19th century, through 38K at the begging of 20th century, to 125700 in 2010.

The 'old colleges' of the University of Cambridge

The University of Cambridge is founded in 1209 by a group of scholars leaving Oxford. This means that the University is one of the oldest in the world while it is the second oldest in the English-speaking area. The worldly known excellence of both university Cambridge and Oxford as well as nearness of Oxford surely are additional reason that universities are often referred to as Oxbridge.

The University of Cambridge is the world leading university, formally ranked in the top year after year (rated first in the world in 2010 and 2011 by QS World University Rankings).

It is believed that the structure and formal organization of university contribute to its excellence. The University of Cambridge is consisted of 31 colleges, that are highly independent having its own premises and income. Usually colleges admits students from different scientific branches while the teaching is held at the university departments. Every student has a mentor who is associated within the college while he or she attend courses at the department of related field. Thus at the department a student meets colleges from the same field of study whereas a college associates students of different fields. Three of the colleges, Murray Edwards, Newnham and Lucy Cavendish admit women only whereas the other are mixed. Some of the colleges are Trinity College, Corpus Christi College, Queens' College, Emmanuel College, Magdalene College etc. The oldest college is Peterhouse, founded in 1284 while the newest one is Robinson, founded in 1977. Between 1594 and 1800 no one college were founded, thus colleges are usually separated into two groups:

Cambridge, England - the town of one of the oldest and the best university in the world

Cambridge was a home of many famous scientists. One of the greatest mathematicians and physicist of all time, Isaac Newton was a student, and later professor, of the University of Cambridge. Newton developed calculus – the base of modern mathematics, discovered the three laws of motion – the base of mechanics and the law of gravity among the other achievements.

University of Cambridge is a home of the famous astrophysicist S. Hawking. Hawking is a theoretical physicist who is known by his scientific work in general and quantum relativity. Hawking theoretically predicted that black holed should emit radiation, a spectacular phenomenon nowadays known as Hawking radiation. His book 'A Brief History of Time' has sold more than 10 million copies and has been translated into many languages.

One of the best known symbols of Oxbridge is the boat race between the two universities. Starting in 1829, every year a race is held. Cambridge crew won the 2012 race, which was 158th contest. With that victory Cambridge lead in total score with 81 victories to Oxford's 76.

The race takes place on the river Thames in West London. The length of the track is 6.8 km, and a vessel needs more than 15 minutes to finish the race (current record is 16 minutes and 19 seconds set by Cambridge in 1998).

The video above presents finish of the 2011 Boat Race when Oxford beat Cambridge. Cambridge team won the 2012 Boat Race.

There is a very good connection London – Cambridge by bus as well. Several times a day bus goes from Cambridge to Oxford and the ride takes some 3 hours.

The center of Cambridge 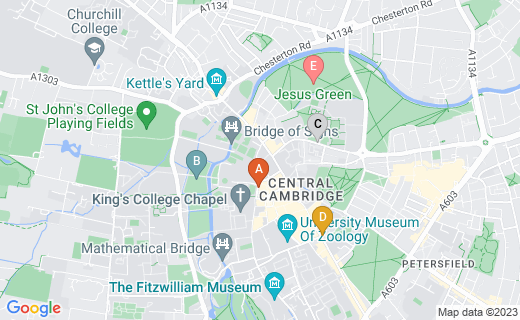