In August 2010, my boyfriend and I embarked on a two-day camel safari from the golden city of Jaisalmer - located in the Rajasthan region of India. We rode camels amid sand dunes, saw the most spectacular sunset and shooting stars among the starriest nights, and enjoyed an enchanting performance by the local desert people to Rajasthani music.

A typical camel safari lasts 4 days and three nights, and offers a chance to explore the area in a very authentic way atop a camel, with entertainment by local folk performers, and visits to villages. A camel safari can be as short as a couple of hours or for those with more time and a bigger budget, can last up to 30 days!

Jaisalmer is the most known gateway to the Thar Desert. It is a fairytale-like golden fortress city that seems to rise out of the desert. The glistening gold color of the yellow sandstone buildings blend in with the surrounding desert, set apart because of its distinct location taking up the entire top of a hill. It was founded in 1156 and is very close to the Pakistani border. The fortress city is full of palaces, temples, and is a starting point of a great camel safari adventure.

Riding a Camel in the Thar Desert

The camel is a funny looking animal. When it’s not standing, it sits on its stomach, with its legs folded underneath. The face looks like it’s constantly grinning – just look at the pictures! Getting on a camel is easy but watch out. As it lifts itself up from the ground, a camel makes some jerking movements as it initially leans forward on its knees and then suddenly shifts all its weight and stands up. You need to grip tight! I really thought I was going to fall off but I held on tight and felt like I was on a roller coaster ride.

Getting the hang of riding is rather simple but pretty unique. Your feet dangle as you move through the desert. While riding, you hold on to a rope that’s attached to the camel’s nose which also helps guide the animal. Pulling the rope left steers the camel left, pulling right direct the camel to go right. Kicking your heels to the camel’s sides motions the creature to either begin moving or to speed up. Dismounting a camel is like a short free-fall drop at an amusement park when a camel abruptly lays down. Overall though, it's a blast!

It is recommended to visit Rajasthan between October and March. We visited in August, which was during the monsoon season in India and still absolutely loved it. If you don't mind getting a little wet and want to see the lakes full and vegetation green, the wet season is the perfect time to come!

What to bring on a camel safari 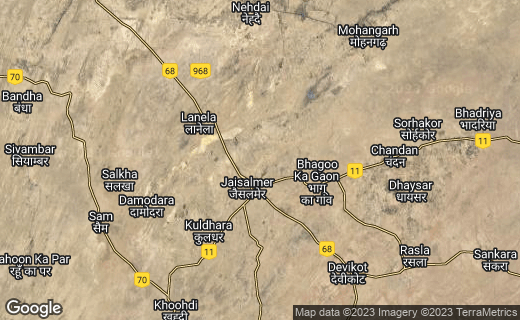