The Best of Cannes, France

Only 150 years ago, Cannes was nothing more than a quaint fishing village. Since then it has become an elegant city known round the world which attracts an international crowd. Home to the famous International Film Festival, today Cannes is one of Europe’s major tourist centers, though the city’s origin was something of an accident.

In 1834 Lord Broughman, Britain’s Lord Chancellor was forced to stay in Cannes. While going to Nice, an outbreak of cholera caused all travel in the area to be halted. He fell in love with the town and built a house to which he would migrate to avoid the harsh England winters. Soon others of the high society followed, making Cannes the place to vacation.

The places of interest in Cannes include: Haute Ville (the city on high), Viex Port (the old port), the Palais des Festivals (Palace of Festivals) and the Croisette (Cannes’ main avenue).

The top of the city can be reached by climbing Mont Chevalier up to Suquet. Le Suquet is the Old Town with its steep, cobbled streets and a 12th century watchtower. The tower was built by the monks of Lerins and dominates the hill on which Le Suquet is located. The panorama at the top is breath taking with the whole city below surrounded by the blue sea and the Lerins Islands.

All along the Quai St Pierre in the old port fishing boats and pleasure boats can be seen docked side by side. The fishermen work on their nets next to their colorful barks. On the Pier Albert Edouard the most beautiful yachts in the world come to moor.

This fabulous structure, capable of housing all kinds of events, has propelled Cannes into becoming France’s second most popular convention center. The international Film Festival is held here, as well as the MIDEM (congress of record producers), concerts of classical music, dance and theater. Additionally, four casinos are located within.

The most prominent main road of Cannes, France. This 2km road stretches along the Mediterranean Sea. It is known for the Palais des Festivals et des Congrè. 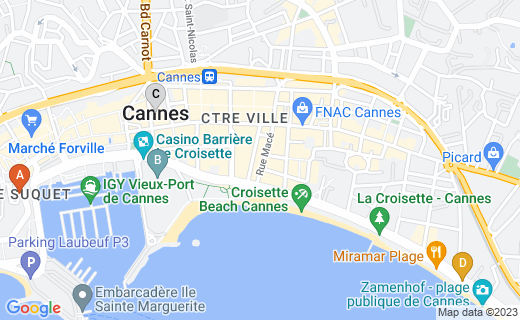 The venue for the Cannes Film Festival and the Cannes Lions International Festival of Creativity.

A a resort town on the French Riviera.

It is a prominent road in Cannes.

The Cannes Festival or the Festival de Cannes or the Cannes Film Festival or the International Film Festival is an annual film festival held in the city of Cannes, France. It includes all films in different genres and even documentaries from all around the world. It was first held in the year 1946. The festival is annually held at Palais des Festivals et des Congres on an invitation basis only.

The most prestigious award given in this festival is the Palme d’Or or the Golden Palm for the best film. Other competition awards are as follows:

The visitors start to come during the month of May when the Cannes Film Festival starts to run. Famous personalities such as actors and directors from other countries can be seen all over the place.

Did you know that the Cannes Film Festival was planned to be held in 1939? But the organizers decided to launch it just after the WWII had ended.

List of Famous Stars on the Cannes Walk of Fame

Cannes Walk of Fame is known as the "Walk of Fame European Style" wherein imprinted palms and signatures of the stars are embossed on the floor.

Here's a list of some actors, actresses, film directors and other famous personalities in the film industry around the world.

Cannes was just a small fishing village before, but became a glamorous place since it became the host city of the most prestigious Cannes Film Festival. The place offers plenty luxury hotels and restaurants. Shops, museums and villas can also be seen in different parts of the city.

As this place became the place of rich and famous, visitors may expect things to be quite expensive here. Yes, even a single souvenir magnet may cost you 6EUR. But for those who have enough budget who really love to do shopping and to do gambling. There is a casino near the Palais Des Festivals. Boutiques for branded items can be seen everywhere.

On the other hand, visitors with limited budget can still enjoy the place. Buy some food in the nearby grocery stores stroll around the city while checking out the beautiful view of the old marina. One of the best tourist attraction in Cannes is the architectural design of Le Suquet, an old medieval quarter of Cannes. Tourists managed to enjoy the climb going to Le Suquet despite of the winding cobbled lane because of the breathtaking view of the sea from the top plus the beauty of clock tower and old church.