The Pilgrim Monument is a 252-foot tower overlooking the harbor where the Mayflower first dropped anchor and the Pilgrims went ashore to take their first steps in the New World. The monument is not in Plymouth, Massachusetts, however, where most people might expect to find it. The Pilgrim Monument is actually located at the very tip of Cape Cod, in Provincetown.

In fact, the Pilgrims spent five weeks on the outer Cape before moving to Plymouth. During this time, many key events occurred, including the signing of the Mayflower Compact, the Pilgrim's first encounters with Native Americans, and the first birth in the New World.

This article will briefly recount these events, and point out where they occurred. These sites are all easy to find, and can be interesting and fun places for adults and families visiting Cape Cod who want to retrace the earliest footsteps of the Pilgrims.

The Pilgrim's Landing at Provincetown

On November 9, 1620, after more than two months at sea, the Pilgrims sighted land. They were north of their intended destination (the Hudson River), but weather conditions prevented them from sailing south. Instead they chose to drop anchor in the safety of what is now Provincetown Harbor.

Before leaving the Mayflower, the Pilgrims wrote a document to establish some governing principles for their new settlement. This document, the Mayflower Compact, declared that the settlers would enact, by mutual consent, laws for the common good, by which all agreed to abide. It was the first example of a government based on the consent of the governed in the New World - but it would not be the last.

On November 11, 1620, a group of Pilgrims went ashore for the first time. They found the area to be a thin strip of mostly sand, surrounded on three sides by ocean, with no sources of fresh water. Fortunately they did find some trees which could be used for firewood.

The Pilgrim Monument is the tallest all-granite structure in the United States. The monument, which opened in 1910, towers over Provincetown, and can be seen for miles as you approach the town from Route 6.

Construction on the tower began in 1907, when President Theodore Roosevelt traveled to Provincetown to lay the structure's cornerstone. When the monument opened in 1910, President William Howard Taft was there for the dedication.

A series of steps and ramps leads to the top of the monument, where visitors get a spectacular view of Provincetown and the harbor where the Mayflower sat in 1620. At the foot of the Pilgrim Monument is the Provincetown Museum, which showcases the town's interesting history. The admission fee covers both the monument and the museum.

On November 20, 1620, the first Pilgrim child was born in the New World, aboard the Mayflower. The boy's name was Peregrine White. Peregrine means "traveler" or "pilgrim".

On November 15th, an expedition set out to explore more of the surrounding area. On the first day, they saw a small group of indians, who immediately ran away. On the 16th they found their first fresh water, and, later, a cache of buried indian corn. The starving Pilgrims took as much of the corn as they could from the area, which they named Corn Hill.

Corn Hill is now the site of a beautiful public beach in the town of Truro. After spending a day swimming and sunbathing, visitors may choose to stay for the gorgeous sunset over the ocean.

Just off the beach's parking lot is a memorial plaque, which reads:

“Sixteen Pilgrims led by Myles Standish, William Bradford, Stephen Hopkins and Edward Tilley found precious Indian corn on this spot which they called Corn Hill. November 16, 1620 - ‘And sure it was God’s good providence that we found this corn for else we know not how we should have done.’”

On December 6, a group of Pilgrims began the search for a better location on which to build a permanent settlement. They set up camp that evening on the shore of what is now Eastham. The following night they were awoken by the sounds of what they believed to be an indian attack. The Pilgrims fired a few gunshots, and the noises ceased.

On the morning of the 8th, the indians, members of the Nauset tribe, again attacked. It may have been, at least in part, in retaliation for the theft of their corn. According to some reports, the Pilgrims had unknowingly desecrated an indian burial site at Corn Hill.

The Pilgrims responded with gunfire, and the indians soon fled. No one on either side was hurt during the brief exchange. The Pilgrims referred to the event as First Encounter, and the site is now a public beach. A plaque nearby commemorates the event.

Did you know the Pilgrims didn't originally land in Plymouth?

As the expedition left Eastham to continue their search, their small boat was damaged during a storm. They had to come ashore at the nearest land they could find - an area which they soon discovered had abundant fresh water, good soil for planting, and an excellent harbor. The party returned to the Mayflower with the news, and by December 16, the Pilgrims had relocated to the area we now know as Plymouth.

Plymouth is just over 75 miles from Provincetown. Vacationers at either Plymouth or Cape Cod could easily make a day trip to the other location to complete their Pilgrim experience. See the map below for details: 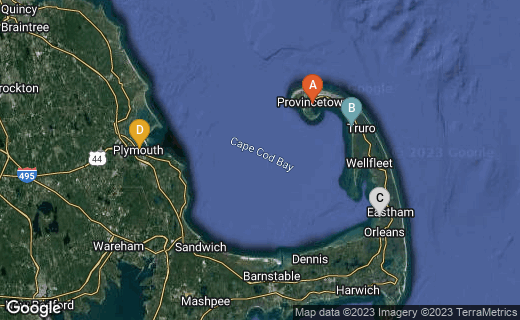 The tallest all-granite structure in America commemorates the site of the Pilgrim's first arrival in the New World.

Site where the Pilgrims discovered a cache of indian corn that saved them from starvation during their first winter.

Site of the Pilgrim's first encounter with members of the Nauset indian tribe.

The Mayflower II, a faithful reproduction of the original Pilgrim ship, sits at Plymouth Harbor, next to Plymouth Rock.

Pop Quiz - how many can you get right without looking back?