This is a historic Oregon Coast destination and is just off the coastal highway making it the perfect place for a day trip to enjoy some of the best viewpoints of the rocky shores. The lighthouse is a part of of the beautiful and rugged landscape that makes up the cliffs that look out over the Pacific Ocean

The Cape Meare's lighthouse is named after the first ship captain to sail into Tillamook Bay which is located south of the Columbia river. The coast around Tillamook bay contains many offshore rocks causing potential danger for ships sailing up and down the coast and especially any ships looking to enter Tillamook Bay. The lighthouse was completed in 1889 and finally commission on January 1, 1890, with small quarters and a large five wick oil lamp / reflector system the Cape Meare's Lighthouse was capable of keeping ships traveling by aware of the coastline. Due to modern day technologies the lighthouse finally ceased operations in 1963.

Upon being closed as an official lighthouse, the premises have been subject to vandalism, however the most recent vandals that shot out panes of glass and damaged the workings of the lighthouse, were caught and held accountable and the lighthouse has been restored and is worth checking out if you are in the area.

When you arrive at the park entrance you will have to drive for a few minutes through the huge trees that line the windy road. The parking is free once you get to the parking area and there is even parking location that overlook the two largest viewing areas to look North and South along the coast. The lighthouse itself is located about 1/4 mile maybe a little more down a hill, the path is paved despite being steep to get to the cliffs edge where the lighthouse sits, it is a relatively easy walk and feels great if you have been driving for a little while anyways to get out and stretch the legs. This park is heavily visited during the warmer months and so plan to encounter other visitors and even on a windy and cold day there will still be people enjoying this place.

This is the perfect destination for a family from Portland, Oregon that wants to enjoy a day at the coast. The lighthouse is located about one hour and forty-five minutes drive from the city. The ride to get to the coast along starts on highway 26 and then veers off onto highway 6 the Wilson River highway. There is several parks and viewpoints of the river along the way towards the city of Tillamook including a waterfall and several hiking trails. Once into the city of Tillamook follow the signs to the Cape Meare's lighthouse. If you pack a lunch eating at one of the viewpoints is a perfect place to sit back and watch the ocean crash against the cliffs and rocky shoreline. Hike down to the lighthouse and then up and over to the Octopus tree. If you want a special treat before heading back to Portland make sure and drive into town and enjoy a Tillamook ice cream cone at the Cheese Factory, located just in town. 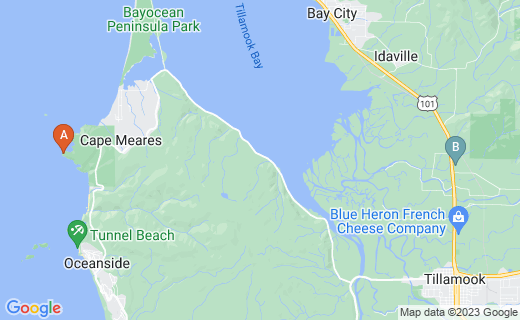 The best ice cream and cheese.

The Cape Meare's Lighthouse overlooking the Oregon Coast is a beautiful state park with hiking trails, visitor center with local information, impressive viewing locations of the shear cliffs around the lighthouse. The Cape Meare's lighthouse destination area also contains a very easy to easy hike that is barely one mile and leads to the largest Sitka Spruce tree in the the entire state and is called the Octopus tree because of its numerous large tree trunk sized branches shooting off the base in many directions.

The Lighthouse is located about 15 minutes west of Tillamook, Oregon, the other coastal towns nearby include Oceanside and Netarts both offering visitors places to eat and shops to to beach shops to check out. To get there you get to ride around the North side of the Tillamook bay and cross the Tillamook river which offers several additional places to get out and enjoy this beautiful part of the country.

The Cape Meare's lighthouse is a place of pride amongst Oregon Coast residents and it is a favorite destination of many to view wildlife that resides around the lighthouse as well as those that just pass by throughout the year including the whales that migrate from Alaska to Baja every year.

One of thee things that makes the Cape Meare's area so special is that it is also home to the largest Sitka Spruce tree that resides near one of the large sheer cliffs that over look the ocean. Take the 1 mile hike and check out this amazing tree that has numerous large arms extending off it. There is also a great viewing spots that has been cleared to take in the gorgeous view from the hill.

If you enjoy seeing amazing things in nature than you will enjoy the short hike to view this absolutely massive tree. Being near the edge of the cliff it is rumored that this tree was shaped this way due to the winds that constantly pound this coast line and made it into the deformed yet inspiring giant. Others think that the native Americans had a part to play in the creation of this tree, but no one really know, except that it is a very old tree and now the largest Sitka Spruce in Oregon.