Charleston, South Carolina, originally named Charles Towne, is one of the oldest cities in the United States. How could it not be the site of some of the oldest churches, functioning churches in America? Early settlers, founding fathers, slaves, indentured servants and wealthy plantations alike, brought their religions from Britain, Barbados and other Caribbean Islands. But not only did they bring their religion, but they also brought their architecture and city designs with them.

The churches of Charleston, South Carolina were, and still are, beautiful - some in their simplicity, others in their unique architectural intricacy. Often called the "the Holy City" because of the proliferation of churches, it should be no wonder that at least some of these wonderful churches should be included as “must see destinations.”

Location of the Circular Church in Charleston, SC 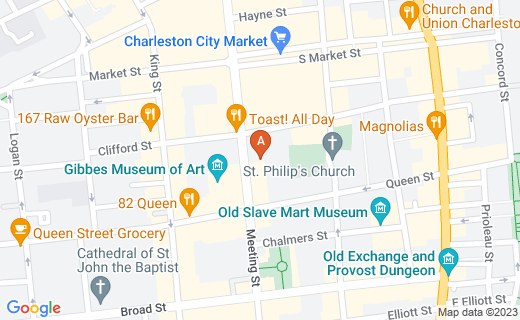 Your list of churches to visit should include the Circular Congregational Church. It has a congregation that has been continuously worshipping since 1681. The current structure was built in 1892 after the Great Fire of Charleston in 1861 destroyed the original and much of the rest of the city on that particularly windy, cold December night.

Located on Meeting Street, the Circular Congregation Church has the oldest cemetery in Charleston with tombstones that date back as far as 1695, soon after the church was first established.

The architect for the original construction was Irish born Patrick Charles Keely, who lived in Brooklyn and built over 600 churches across the young nation. Keely was a student of the famous English architect Augustus Pugh.

Keely returned to Charleston twenty-nine years after the fire to rebuild the Gothic Revival structure, following the original blueprint for the majestic cathedral.

Also of the Gothic Revival architectural style is Emanuel African Methodist Episcopal Church which was built in 1891. It stands as the oldest AME church and has the oldest black congregation in the South.

If you are Baptist - and even if you are not - it is significant to note that First Baptist Church is the oldest Baptist Church in the South and should be included on your tour of churches. The architect, Robert Mills, described the church as “the best specimen of correct taste in architecture of all the moderns buildings in this city.”

Central Baptist Church is one of the few churches built in the Carpenter Gothic style of the Victorian Era. The first church founded and contracted by freed slaves, construction on the church was begun in 1891 and completed in 1893. The architect was John Pearson Hutchinson, Sr. a building contractor, who was also Deacon of the church.

The church is on the National Historic Registry and “…is said to contain the original galleries and pews, excepting those of the choir,” according to authors Margaret Langford, Carolyn Roberts, AnnSimpson and Lauren Hummer in a historic paper on the church.

The murals on the interior are breathtaking in their majesty and were designed and painted by Indian artist Amohamed Milai, newly converted to Christianity. The magnificent murals alone are worth a visit to Central Baptist Church.

Not to be missed on your tour of places of worship is Kabal Kadosh Beth Elohim Synagogue, the oldest Jewish Synagogue in the South and the second oldest synagogue building in the US.

It is speculated that the design of First Scots Presbyterian Church of Charleston, SC was inspired by the design of the Baltimore Basilica in Baltimore, MD and the oldest Roman Catholic Church built in the US. Of further significance is that the architect of the Baltimore Basilica was Neoclassical architect Benjamin Latrobe who has been called the “Father of American Architecture” and who also designed the United States Capitol.

The current church structure is a replacement of the first church which was a wooden structure built on the site. That original foundation is marked by flags on the church grounds. The current church was erected in 1814 by two Scottish brothers and is the fifth oldest building in Charleston.

It is speculated that the Great Fire of 1861 was started by slaves using fire for cooking and/or warmth and it got out of hand. In truth, many fires of a mysterious nature were often blamed on slaves. According to official accounts, there were no deaths.

However, there are anecdotal accounts that have been passed down of masters ordering their slaves into their burning homes to retrieve family jewels and heirlooms. Their were slaves who did not make it out of those burning houses. It should also be noted that much of the fire brigade sent to fight the fire were slaves sent into service by their masters. There were bound to have been some deaths, they were just not significant to those who kept the records and, therefore, went unsung and undocumented.

Five churches were destroyed during the Great Fire of 1861. Property damage was set at approximately $7 million and a total of 576 buildings were destroyed according to the January 4, 1862 issue of Civil War Harper’s Weekly.

Civil War bombardment was the another event that affected the churches of Charleston. By the time the Civil War bombardment, much of the destruction had already occurred. The city had been razed by the Great Fire that occurred months before shelling was started the city by Union soldiers.

Given its long history, Charleston is naturally rich in architectural styles. Its churches are a testament to the tenacity and faith of its citizens as they built and rebuilt, often at great sacrifices, their houses of worship. To leave churches off your tour of the city would mean that you miss much of Charleston’s architectural history and a significant understanding of the history of its people.

If you travel to Charleston to visit its churches, the summers are hot and steamy with temperatures that can reach 100℉. Dress accordingly. The winters are more tepid and the temperature rarely goes below the 50s. The wealthy residents during the times many of the churches were constructed would travel from their plantation in the outlying regions of the area to their summer homes in city or along the ocean and return in the winter when the temperature was more bearable and the insects less aggressive.

Besides the churches, one of the other reasons to visit is the food.As a visitor to Charleston, you never have to worry about what or where to eat. The area is known for the delicious low country food. Just as there are a number of guided tours of the churches in the city, restaurants are plentiful and there are bound to be a few restaurants in the vicinity of any church you visit.

To put your visit in perspective, In 2016, Charleston was ranked the "World's Best City" by Travel + Leisure. Just make sure you add a tour of at least some of the churches highlighted here and you will get a true flavor for Charleston and its churches.

Have you visited the city of Charleston, SC?