Chartwell is situated in the British countryside of Kent and was home to the Churchill family for 40 years. Winston Churchill, the two-time British Prime Minister first saw the property in 1921 and instantly fell in love with it. At the time he was suffering with financial problems and could not raise the £6,500 reserve price on the estate. However, in 1922 Churchill inherited money from a distant cousin and his finances were transformed. In late 1922 he bought the 80 acre estate for £5000.

Visiting Chartwell is a great family day out. Not only can you tour the house and learn the history, but there are extensive grounds for picturesque walks and picnics, as well as a pond that is home to a family of black swans.

The Chartwell estate was in disrepair when Churchill bought it, It took 2 years and £17000 to rebuild. His wife Clementine decorated the house in a 1920s style, the gardens were landscaped and the estate lake was made home to Australian Black Swans and Mandarin Ducks that had been given as gifts.

After Sir Winston Churchill died in 1965 his wife Clementine did not wish to continue living at Chartwell, so she relinquished the property to the National Trust. She still made several visits each year until her death in December 1977.

The National Trust now own and tend to the property which is open to the public from March to November each year. I have been lucky enough to visit this estate on more than one occasion, and it really is stunning, especially on a sunny day. The house and gardens are very much as the family left them, as requested by Clementine Churchill. Personal furniture, paintings (60 of which were painted by Churchill himself), and books are as they would have been situated when the family lived here.

There is a visitors' book on the Hall table that records the names of family and friends whom visited. Lots of Politicians, Scientists and Businessmen are noted, though the most recognisable name has to be that of film star Charlie Chaplin. 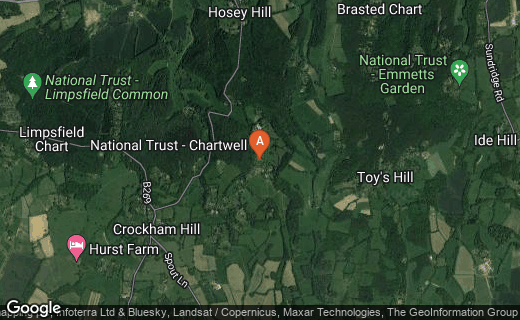