Saturday 31st August 2013 is the Oyster Festival, or Fête de l'Huitre, at Cheronnac

Just as the first bottles of beaujolais nouveau are a cause for celebration, the start of the Oyster Season in September is a good excuse for a party. On Sunday 5th September 2010 I was ther when the oysters, grown in the Marennes Oléron on the west coast of France arrived in Cheronnac, a delightful little village in the depths of rural Limousin, France.

What better way of combining sustenance with entertainment than to organise a communal meal?

Typically, the French have used this as a fabulous excuse to organise a wonderfully animated and colourful spectacle involving wine, traditional foods, crafts as well as lunch for all and sundry on a grand scale. Most of the 'guests' are local people for the commune (or parish) of Cheronnac and surrounding communes, the beauty of the communal meal is that it is REALLY French and anyone can join in.

To add to the spectacle, there were pony rides, a long distance walk, a parade of horses through the streets and the oysters for the lunch arrived in a wagons pulled by a mules and horses amid much clapping and cheering. The sun shone and everyone was happy.

In 2013 the Fête de L'Huitre will start on Saturday 31st August with debates and conferences starting at 20h 30. On Sunday 1st September all day there will be markets devoted to Limousin regional crafts. There will be horse drawn cart rides and exhibitions.= all day. At 11h 30 the 'chariot' or horse drawn cart with the oysters will arrive and the communal meal, held under marquis at 12h 30. Call the Mairie on 05 55 48 60 80 for luncheon reservations.

Are you an oyster lover?

Oysters - do you love them or hate them? 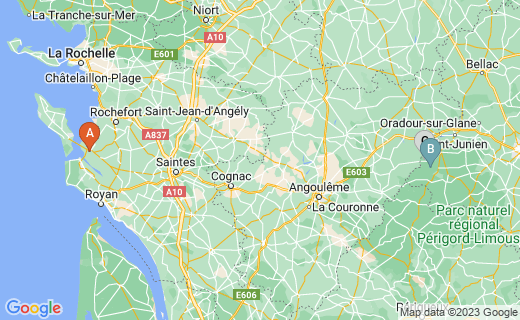 The oysters are grown in le bassin de Marennes Oléron

Cheronnac is a lively little village in Limousin

Every year Videix holds two communal meals on the shores of Videix Lake.

The local producers of food and wine bring their wares to show and sell to the crowds that flock to the festivals. It is an excellent opportunity to try locally produced fine, traditional French foods, or to compare different bakers, cheese-makers or butchers.

The food on display looks wonderful, and you know that the best ingredients and traditional recipes have been used to make really local food. When you come to Limousin, you step back in time at least 50 years.

French wine merchants have no difficulty persuading people to buy

This cheerful chap is Noêl Lepreux who stayed with us at Les Trois Chenes. He is an independent wine merchant with more than 10 years of experience. He sells a range of French wine and has over 360 wines available at various prices. He not only attends fairs, but will also visit you at home and organise a tasting - ideal excuse to throw a party. Contact him on 06 81 90 90 68 or e-mail noel.lepreux@orange.fr.

Les Caves de Saint Sornin were also there. Limousin is not a wine area and Saint Sornin, based in the Charente about 30 minutes from Les Tois Chenes, is our nearest wine producer. The region is also famous for its slippers so the stall has combined the two.

Traditional beers are also on sale, as well as our local liqueur made from chestnuts.

And the 'Buvette' or drinks tent at Cheronnac does brisk trade

Where there is food there is drink in France. The buvette is always well attended and people buy aperitifs before sitting down for the communal meal. At Cheronnac they had people dressed in local costumes serving the drinks, but I didn't manage to get a picture of them at the bar. After a good deal of chat and wine, people will find their way to the marquee and settle down to a lunch that will last until 5pm.

The great French communal lunch - the French love to eat together

Eat oysters and raise money for the commune

These grand dinners and lunches are usually organised by the Commtte de fêtes, a group of local people from the commune who raise money by organising various entertainements throughout the year. This money is then spent on the commune, buying a Christmas tree for the village, for example.

The dinners often seat more than 150 people and typically consist of starter, perhaps a second dish, a main dish, cheese, dessert and coffee. Wine is also included along with an aperitif. Amazingly nobody ever seems to get drunk although wine and spirits are flowing well for the full 5 hours it takes to get from start to finish.

In spring the hunts also stage lunches or suppers and here venison, wild boar, fresh fish and pheasant are on the menu.

Everyone can join in. If you see a poster advertising a village meal or hunt supper, make a reservation by telephone. The contact numbers are usually on the posters.

Where to stay in Cheronnac, Limousin

With us of course! Join us in our B&B or hire our holiday cottage and come and explore this hidden corner of South West France.

Have you ever visited the oyster festival in Cheronnac?