Awesome views from the Congress

Sparkling chandeliers and ornately trimmed ceiling archways of green and gold greeted us as we entered the main lobby of the Congress Plaza Hotel. The lighting from above cast a soft glow on plush red leather chairs and dark hard wood tables placed strategically for relaxation and conversation.

Arriving at the hotel earlier than expected my husband and I hoped for an early check in and were pleasantly surprised when they were able to accommodate us. Once we finished checking in we headed toward a pair of elegant elevators that were gold and decorated with intricate beautiful carvings.

Our room was perfect with all the things one needs for a comfortable stay. First off everything was clean and the room smelled fresh. The Congress was originally built in 1893 and sometimes the older hotels can smell musty, but that was not the case here. Plush white fluffy towels filled the bathroom with plenty of lotions and potions to pamper with. Soft blankets and clean linens and lots of pillows lay on the bed promising a good night’s rest. Last but not least the view from our room was awesome as we could not only see Grant Park across the street but Lake Michigan, and Navy Pier.

Whether you’re visiting Chicago to shop, sight see, attending an event or trying a new restaurant this is the place to be. The hotel is a prime location right on Michigan Ave. which is walking distance to some of the greatest shops like Bloomingdale’s, Macy’s and Saks along with many others. One of our favorite restaurants on the Magnificent Mile is Bandera’s which makes wonderful cornbread and focaccia. Millennium Park and the Art Institute are also only a few blocks from the hotel as well.

The hotel is rich in history as well as being a great place to stay in Chicago. When the hotel was first built in 1893 horse drawn carriages brought guest to its front door not limos and yellow cabs. The street lights were gas lit not solar powered, and Michigan Ave. was cobbled not paved in blacktop.

The guests who arrived at the hotel in carriages included former presidents such as Grover Cleveland, William McKinley and Teddy Roosevelt to name a few.

The Gold, Florentine, Elizabethan, and the Pompeian Rooms have all been used to host huge galas and events for the up and coming in Chicago. Pomp, circumstance and grandeur graced these rooms back in the day. It must have been a very exciting time to be at one of those special gatherings.

The Congress Plaza Hotel has been listed as one of the top ten most haunted places in Chicago. Apparently it’s a hot spot for paranormal activity, appliances turning on and off, ghosts partying in the ballroom at night, and the infamous gangster Al Capone walking the halls.

We slept fine and were not disturbed by any strange noises or activity. I'm a light sleeper so if anything out of the ordinary was going on I would have heard it. Maybe the ghosts were taking a vacation or in another part of the hotel while we were sleeping. Not sure on that one, but I'd have no problem staying there again. We had a great time at the Congress in Chicago and look forward to going back. 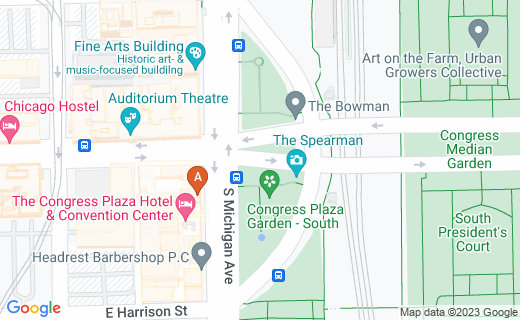