It wasn't difficult finding the trailhead above Juneau where soft rain angled down from the grayness of cloud. I cautiously proceeded along the Mount Roberts Trail through foggy forests of Sitka spruce, hemlock, yellow cedar and alder. There were also dense undergrowths of stinging devil's club, ferns, mosses, and clusters of blue lupine and red Indian paintbrush. But quickly the trail became extremely steep with a series of tiring switchbacks. I rested for a spell and glanced down on Juneau Harbor, filled with fishing craft, luxury liners, and seaplanes taking off like buzzing mosquitoes through layers of fog. However, nature's own sounds held sway. Aisles of spruce resounded again and again with the musical quiver of rising notes from a Swainson's thrush, and splashing threads of waterfalls tumbled down the flanks of Mount Juneau, which was spun over with threads of mist...Notes from some distant thrush or warbler suddenly caught my ear, but the more I listened, the more I imagined them to be faint notes from a stone flute. One cannot help but feel the presence of the spirits of Tlingit and Haida Indians in such a place as this....

Mist cleared long enough for me to spot the glazed summits of Mount Gastineau and Mount Roberts looming above like humpback whales--only to disappear in grayness. An omnipresent wind shifted direction and blew gently across the valley, carrying the plash of many distant waterfalls. Was I in Scandinavia? The symphonic strands of Jean Sibelius' "Finlandia" raced through my mind.

Ever upward I hiked, through endless groves of leafy scrub alder bushes as if I were in a dream out of some Japanese Noh play. Suddenly I was scared witless by a willow ptarmigan, fluttering and clucking like some mythological beinf, trying to decoy me away from her brood of chicks. With a fast-beating heart, I continued to climb onward across glaring snowfields that had been melted down to the green tundra of June. Here in panhandle Alaska, tree line is more than ten thousand feet lower than it is in Colorado--a mere 1,500 feet! A denizen of the tundra, the Smith's longspur, whistled a high note and then, a bit later, a low note. In the spirit of fun, I whistled two highs and a low, and various combinations thereof, trying to confuse him. But, of course, he maintained his beauteous composition, claiming his territory.

Finding an exposed rock, I sat down to peer through holes in the fog at brilliantly illuminated peaks above the Juneau Icefield. Time vanished up here in the Alaskan tundra; who knows how long I sat just staring at fog patterns that occasionally revealed alpine peneplains. Noticing how dark it had become, I became apprehensive. Mountains no longer peeked through fog holes. Even the Smith's longspur ceased his song. Primal instinct warned me of an impending storm; quickly I descended to open tundra and alder clumps.

Sure enough, by the time I reached scrub forest, it started to pour down in buckets, making my steep and muddy trail as slick as grease. I had to catch myself a couple of times; my feet nearly slipped from under me. Thankfully, I entered the firmer ground of a Sitka forest not so far above the silvery-wet streets of Juneau. As I looked out over the shining rooftops of the city, punctuated with the onion-top dome of a Russian Orthodox church, I knew I would return someday....

Readers may be interested to know that there is now a tramway up Mount Roberts from Juneau! One person said this story is an exaggeration. It never thunders with lightning in Juneau. Ha! I say, I experienced it full force! 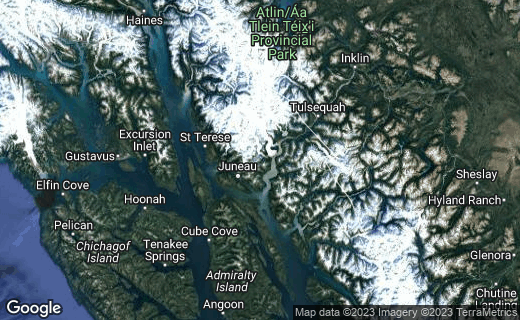 If you had a free ticket to fly to Juneau, would you use it?